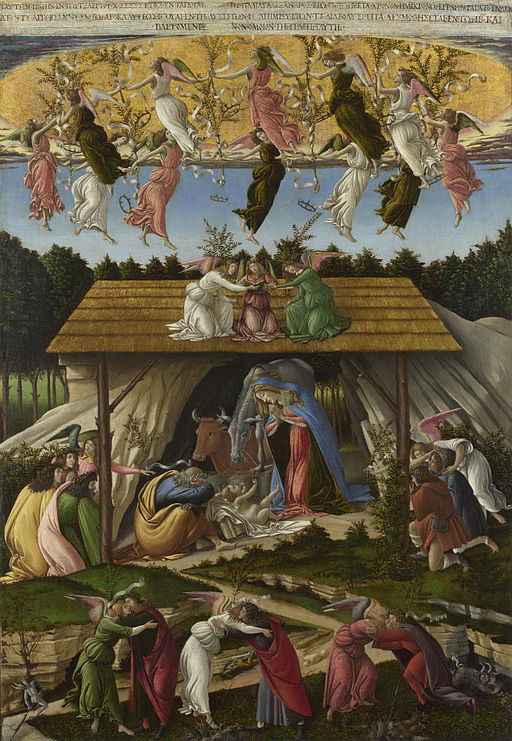 The Mystical Nativity by Sandro Botticelli depicts the joy and celebration of earthly and heavenly delight at the birth of Jesus. The angels are dancing at the top of the painting, and above them is Botticelli’s name, but also some apocalyptic and troubling words. Botticelli believed himself to be living during the Great Tribulation due to the upheavals in Europe at the time and the preaching of the time that was predicting Christ’s return, as stated in the Bible. It is Botticelli’s only signed work and has an unusual iconography for a Nativity.

The painting has some dark symbolic premonitions, including:

On the reassuring side, the painting includes the following:

The painting uses the medieval convention of showing the Virgin Mary and infant Jesus larger than other figures. This emphasis was certainly done deliberately for effect, as earlier Botticelli nativity paintings used the correct graphical perspective. The Greek inscription at the top translates as:

“This picture, at the end of the year 1500, in the troubles of Italy, I Alessandro, in the half-time after the time, painted, according to the eleventh [chapter] of Saint John, in the second woe of the Apocalypse, during the release of the devil for three-and-a-half years; then he shall be bound in the twelfth [chapter], and we shall see [him buried] as in this picture”.

This painting may be connected with the influence of Savonarola, whose influence also appears in some late pictures by Botticelli. The painting emerged when the fanatical preacher Savonarola held the city of Florence in his grip. He had arrived in Florence in 1490 but had been repelled by its artistic glory and wealth. He preached that this art was corrupt, and a great scourge was approaching. His words became a terrifying reality during the Italian War of 1494–1498. In 1494 a vast French army invaded Italy, and 10,000 troops entered Florence, and the citizens feared the sack of their city. Savonarola stepped into the political vacuum; he met with the French king and persuaded him to leave Florence peacefully. In their gratitude, and relief, the Florentines increasingly saw the friar as a prophet, and his preaching attracted huge crowds.

Savonarola claimed that Florence could become the new Jerusalem if the citizens would repent and abandon their sinful luxuries, including their art. His beliefs were made real as groups of evangelical youths went on to the streets to encourage people to part with their luxuries, their pictures, and books, their vanities, combs, mirrors. Botticelli may well have seen his paintings thrown into the flames. The artist might not have objected because, as much of the city, he too was fearful of Savonarola. Savonarola’s fearful sermons must have affected the Mystical Nativity.

For years Savonarola held Florence in his grip, but his hard-line rule made him powerful enemies. He was challenged to prove his holiness by walking through fire, and when he refused, the tide of opinion turned against him. He was arrested, and under torture, confessed to being a false prophet. In 1498 he was hanged with two of his lieutenants. Their bodies were then burnt.

Bonfire of the Vanities

The ‘bonfire of the vanities’ usually refers to the fire of 1497, when supporters of Savonarola collected and burned thousands of objects such as cosmetics, art, and books in Florence. The focus of this destruction was on objects that might tempt one to sin, including vanity items such as mirrors, cosmetics, elegant dresses, playing cards, and musical instruments. Other targets included books that were deemed to be immoral, manuscripts of secular songs, and artworks, including paintings and sculptures.

The Great Tribulation is a period mentioned by Jesus as a sign that would occur in the time of the end. In Revelation, “the Great Tribulation” is used to indicate the period spoken of by Jesus, however, in the context of those hard-pressed by siege and the calamities of war.  Christian eschatology is the study of ‘end things.’ The study includes the end of an individual life, the end of the age, the end of the world, and the nature of the Kingdom of God.

There are many passages in the Bible, which speak of a time of terrible tribulation, such as has never been known. Time of natural and human-made disasters on a grand scale. Jesus said that at the time of his coming, “There will be great tribulation, such as has not been since the beginning of the world to this time, no, nor ever will be. And unless those days were shortened, no flesh would be saved; but for the elect’s sake, those days will be shortened.” [Mt 24:21-22]

Botticelli was an Italian painter of the Early Renaissance who belonged to the Florentine School under the patronage of Lorenzo de’ Medici. His mythological masterpieces are his best-known works today. However, he painted a range of religious subjects and portraits. He and his workshop were primarily known for their many beautiful Madonna and Child paintings. He lived all his life in the same neighborhood of Florence, and his only significant time elsewhere was the few months he spent painting in Pisa in 1474 and his work at the Sistine Chapel in Rome in 1481–82.