“The Woman Taken in Adultery” by Rembrandt depicts the episode of Jesus and the woman taken in adultery from the Gospel of John. In the story, some Jews tried to catch Jesus condoning disobedience of the Jewish Law.

The Scribes and Pharisees, knowing that Jesus empathized and forgave wrong-doers.

To trap Jesus, they placed in front of him a woman who had been caught taking part in adultery. Rembrandt shows the moment at which the Pharisees, attempting to outwit Jesus, by asking:

“Teacher, this woman has been caught in the act of adultery. Now in the Law, Moses commanded us to stone such. What do you say about her?”

“He that is without sin among you let him first cast a stone.”

The accusers realizing not one of them was without sin then depart, leaving the woman alone.

Rembrandt made Jesus appear taller than the other figures and lit him more brightly with the light. Symbolically, Jesus’s height represents his moral superiority over those who attempted to trick him.

Within the dark interior of the temple, Rembrandt employed his usual limited number of pigments, such as ochres, vermilion, red lakes, lead white, and lead-tin-yellow to create a glow under the substantial falling light.

Jesus and the Woman Taken in Adultery

Jesus and the woman taken in adultery is a passage found in the Gospel of John. It has has been the subject of much scholarly discussion.

In the passage, Jesus is in the temple to teach when a group of Scribes and Pharisees confronts Jesus. They bring in a woman, accusing her of committing adultery.

They ask Jesus whether the punishment for someone like her should be stoning, as prescribed by Mosaic Law.

Jesus ignores the initial interruptions and writes on the ground as though he does not hear them. But when the woman’s accusers continue their challenge, he states that the one who is without sin is the one who should cast the first stone.

The accusers realized that not one of them was without sin and quietly departed, leaving Jesus alone with the woman.

Many analysts of the Greek texts of the Gospel of John have argued that it was not part of the original version of St. John’s Gospel. About 1,495 Greek manuscripts include the passage, and 267 do not include it.

Among those 267, however, are some manuscripts that are the earliest and which most textual analysts consider the most reliable.

The subject of Jesus’ writing on the ground was reasonably common in the arts but was not the focus of this composition. There was a medieval tradition that the words that were written are: 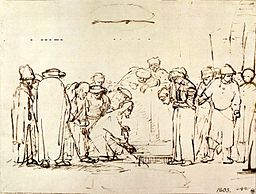 Christ and the woman taken in adultery, drawing by Rembrandt

“Every person is guilty of all the good they did not do.”
– Voltaire