“Triple Portrait of Cardinal de Richelieu” by Philippe de Champaigne shows Cardinal Richelieu from three angles: the right profile, face on, and left profile. This painting was made in Paris as a study for a bust to be made in Rome.

The portrait depicts the grey-haired Cardinal, aged nearly 60, wearing a scarlet liturgical skullcap and cape. He wears the broad collar of a white shirt, which is tied at the neck with a trailing string.

The Cardinal wears the blue ribbon of the Order of the Holy Spirit from which hangs the Maltese cross of the Order. An inscription above the right head, which is the left profile, notes in French “of these two profiles, this is the better.”

In Rome, the Italian sculptor Francesco Mochi had been commissioned to make a statue which is now lost. Later the painting was also used by Bernini for his 1641 Bust of Cardinal Richelieu, now in the Louvre Museum.

Bernini had similarly used a “Triple Portrait of Charles I” by Anthony Van Dyck for his bust of Chares I.

Cardinal Richelieu (1585 – 1642) was a French clergyman and statesman. He was consecrated as a bishop in 1607 and was appointed Foreign Secretary in 1616.

Richelieu soon rose in both the Catholic Church and the French government, becoming a cardinal in 1622, and King Louis XIII’s chief minister in 1624. He remained in office until his death in 1642.

The Cardinal was known as the king’s “Chief Minister.” He sought to consolidate royal power and transformed France into a strong, centralized state.

His chief foreign policy objective was to check the power of the Austro-Spanish Habsburg dynasty and to ensure French dominance.

Although he was a cardinal, he did not hesitate to make alliances with Protestant rulers in an attempt to achieve his goals.

Richelieu was also famous for his patronage of the arts; most notably, he founded the Académie française, the society responsible for matters of the French language.

Richelieu is also known as “the Red Eminence” from the red shade of a cardinal’s clerical dress and his style. 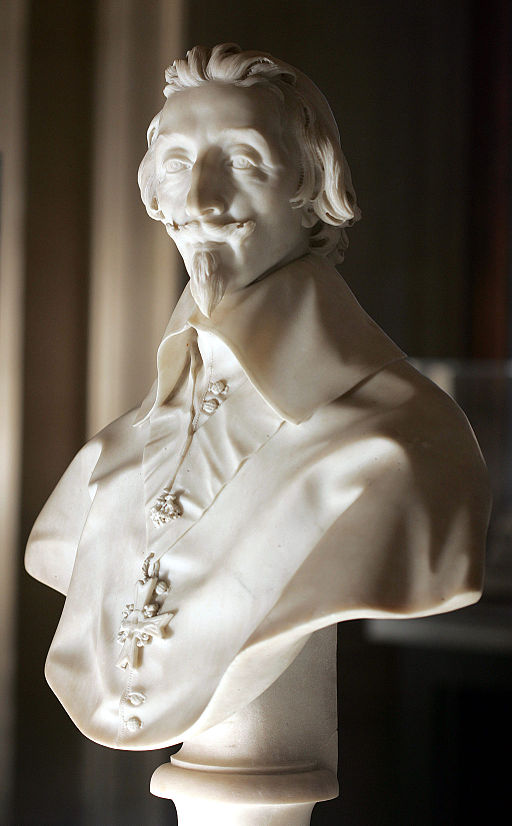 Richelieu has frequently been depicted in popular fiction, most notably as the lead villain in Alexandre Dumas’s novel “The Three Musketeers.”

The IMDb (Internet Movie Database) lists about one hundred films and television programs in which Cardinal Richelieu is a character.

Philippe de Champaigne (1602 – 1674) was a French Baroque painter, who was a founding member of the Académie de Peinture et de sculpture in Paris, the premier art institution in France.

He portrayed the entire French court, the French high nobility, royalty, senior members of the church and the state, parliamentarians and architects, and other notable people. In depicting their faces, he captured the psychological essence of the person.

A Tour of Triple Portraits

A Virtual Tour of The National Gallery

“Carry on any enterprise as if all future success depended on it.”

~~~
“Give me six lines written by the most honorable of men, and I will find an excuse in them to hang him.”

~~~
“To know how to dissimulate is the knowledge of kings.”

~~~
“Secrecy is the first essential in affairs of state.”

~~~
“War is one of the scourges with which it has pleased God to afflict men.”

“Had Luther and Calvin been confined before they had begun to dogmatize, the states would have been spared many troubles.”

“Harshness towards individuals who flout the laws and commands of the state is for the public good; no greater crime against the public interest is possible than to show leniency to those who violate it.”

“If you give me six lines written by the hand of the most honest of men, I will find something in them which will hang him.”
– Cardinal Richelieu