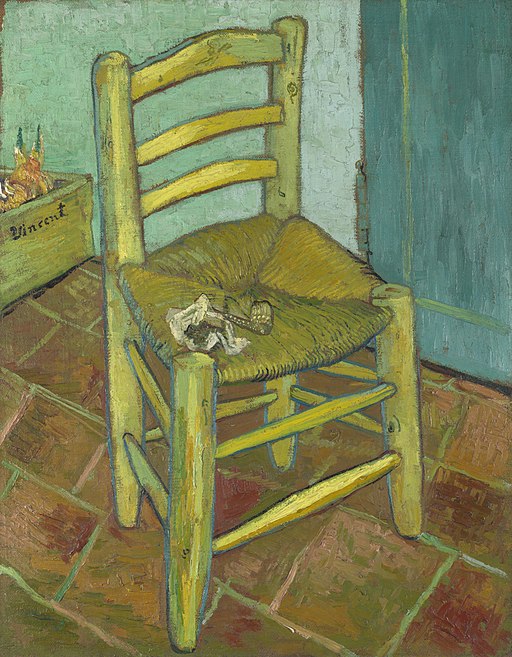 “Van Gogh’s Chair” by Vincent van Gogh shows a rustic wooden chair, with a simple woven straw seat, on a tiled floor. On the chair seat are a pipe and a pouch of pipe tobacco.

This composition of a simple chair set on a bare floor of terracotta tiles became one of Van Gogh’s most iconic and recognizable images.

Van Gogh created this painting in late 1888, and soon after, his fellow artist, Paul Gauguin, joined him in Arles in the south of France.

The picture is one of a pair of chair paintings. The other chair was Gauguin’s Armchair, and they were to be hung together, with one chair turned to the right, the other to the left facing each other.

Van Gogh’s chair is functional and straightforward; Gauguin’s is an elegant and finely carved armchair. The paintings of the chairs can be viewed as surrogate portraits, representing the personalities and artistic outlooks of the two artists.

Van Gogh’s chair, on which he placed his pipe and tobacco, is shown in bright daylight. Gauguin’s, with two novels on its seat, was painted at night and is illuminated by a candle and gaslight.

In 1888, Van Gogh moved to Arles and the Yellow House. However, he had first to furnish it before he could fully move in, so he used it as a studio until his “Décorations” where complete.

He wanted a gallery to display his work, and he started a series of paintings in 1888. All the pictures were intended for the decoration of his room in the Yellow House that included:

The “Décoration” for the Yellow House was the main project Vincent van Gogh focused on in Arles, from August 1888 until his breakdown the day before Christmas.

This “Décoration” had no pre-defined form or size; it grew step by step, with the progress of his work.

Van Gogh starting with the Sunflowers, then portraits were included next, and by mid-September 1888, the idea took shape.