Fashion at the Victoria and Albert Museum

The Fashion or Costume Collection at the Victoria and Albert Museum is one of the most comprehensive, containing over 14,000 outfits plus accessories, mainly dating from 1600 to the present.

The collection is dominated by fashionable clothes made for special occasions. One of the more important items in the collection is the wedding suit of James II of England.

Some of the oldest items in the collection are medieval vestments. The museum continues to acquire examples with modern fashion to add to the collection.

The 20th-century high-fashion garments and accessories include gowns worn by leading socialites such as Patricia Lopez-Willshaw, Gloria Guinness, and actresses such as Audrey Hepburn.

A Tour of Fashion at the Victoria and Albert Museum

This Evening Dress is a graceful satin gown by Lady Duff Gordon in a reasonably restrained mood. The long slit skirt is an attractive feature, although its draped construction is not too revealing.

Lady Duff Gordon’s claim that she had:

“loosed upon a startled London . . . draped skirts that opened to reveal the legs.”

Lady Duff-Gordon (1863 – 1935) was a leading British fashion designer for centuries who worked under Lucile’s professional name.

She was the first British-based designer to achieve international acclaim. She was also a widely acknowledged innovator in couture styles.

She originated the “mannequin parade,” a precursor to the modern fashion show, and trained the first professional models.

Duff-Gordon is also remembered as a survivor of the sinking of the RMS Titanic in 1912.

“For me, there was a positive intoxication in taking yards of shimmering silks,
laces airy as gossamer and lengths of ribbons, delicate and rainbow-colored,
and fashioning of them garments so lovely that some princess might have worn them in a fairy tale.” 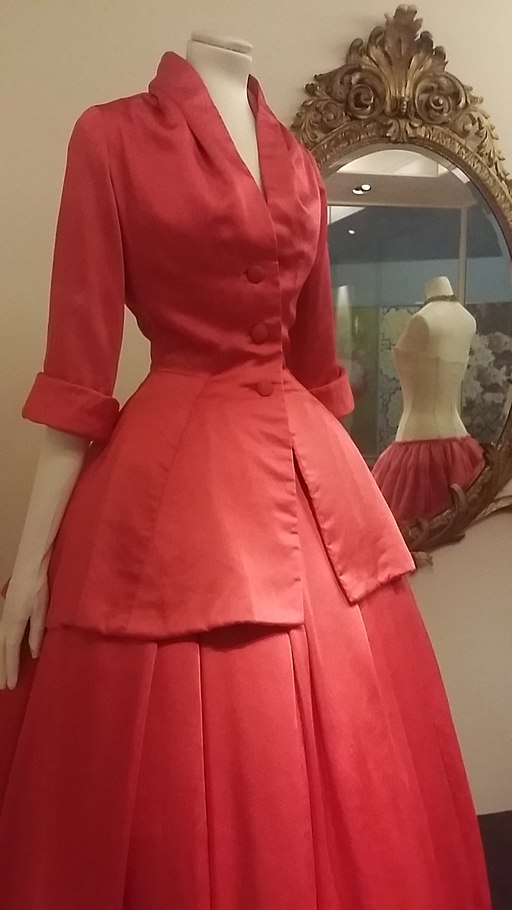 This Zemire Evening Ensemble by Christian Dior as part of Dior’s collection in 1954-5. It is one of his most historical designs, echoing the shape of riding-habits.

A ready-to-wear version was licensed to a British company that made copies for Harrods. It sold for 22 guineas, a fraction of what a made-to-measure version would have cost.

Dior was founded in 1946 by designer Christian Dior who launched his first fashion collection for Spring–Summer 1947.

The show of “90 models of his first collection on six mannequins” was presented in the company’s headquarters’ salons.

The collection went down in fashion history as the “New Look” after the editor-in-chief of Harper’s exclaimed,

The New Look was a revolutionary era for women at the end of the 1940s. The debut collection of Christian Dior is credited with having revived the fashion industry of France.

The New Look brought back the spirit of haute couture in France as it was considered glamorous and young-looking.

The silhouette was characterized by a small, nipped-in waist and a full skirt falling below mid-calf length, emphasizing the bust and hips. 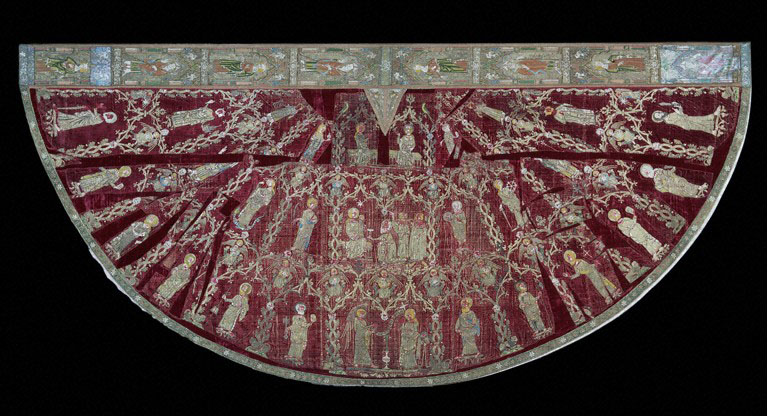 The Butler-Bowden Cope derives its name from the family who owned it for several centuries.

It shows scenes from the Life of the Virgin with Apostles and saints, embroidered with silver, silver-gilt thread, and silk, on luxurious crimson velvet.

The figures framed within Gothic arches are arranged in concentric rows to follow the curved edge and sit along the hem.

This was the base for the high-quality English embroidery called “Opus Anglicanum,” the Latin for “English work,” which was much coveted by Europe’s most influential people.

European kings and popes used luxurious clothing to make a forceful visual statement of their wealth and status.

Vestments with sumptuous and costly textiles were favored by the Christian church, often given by wealthy donors, to show both earthly wealth and spiritual devotion.

Many medieval church vestments were later cut up and re-used. As can be seen from its dismembered state, this cope was made into a variety of ecclesiastical garments but was re-assembled in the 19th century.

Highlights from the Fashion Collection

The surreal fashion of Elsa Schiaparelli