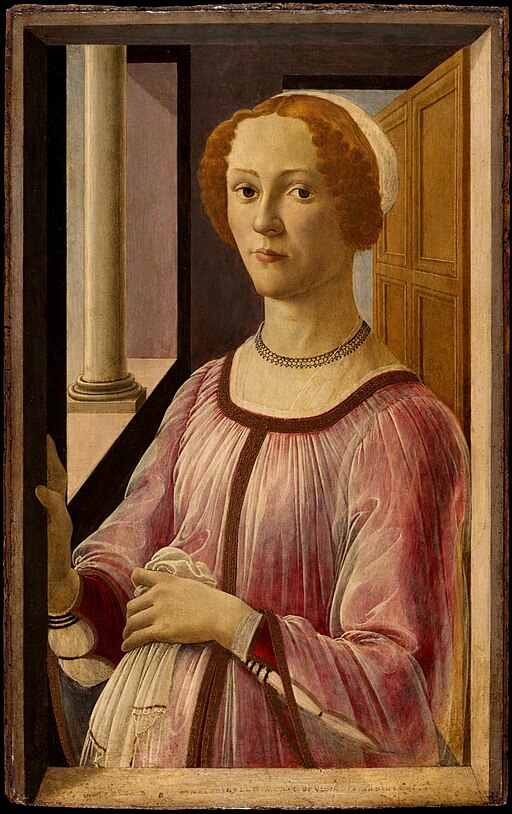 “Portrait of a Lady Known as Smeralda” by Botticelli

“Portrait of a Lady Known as Smeralda” by Botticelli has an inscription on the windowsill, identifying this portrait as Smeralda Bandinelli (Brandini). This painting is a typical example of Botticelli’s early portraits.

Smeralda was a member of a respected Florentine family, the grandmother of the Florentine sculptor Baccio Bandinelli.

The identification of the sitter is based on the old, but not original, inscription at the bottom of the picture:

A sign of her rank and respectable status is the handkerchief which she is holding in hand placed across her body.

From archive documents, it is known that in 1469 Smeralda was 30; her husband Viviano Brandini was 38, and they had three children.

She was the mother of the prominent Florentine goldsmith Michelangelo de Viviano de Brandini of Gaiuole, and grandmother of the sculptor Baccio Bandinelli.

Her hand on the window frame also makes this Botticelli profile pose unique and brings a new sense of movement into the portrait.

This painting helped art historians to identify the similar sheer overdress worn by the Mona Lisa.

She wears a summer domestic dress comprising sheer white fabric cut into the many folds that can bee seen at the neck and sleeves.

A ‘cotta’ of red silk is slit and laced fashionably at the forearms. The summer gown of sheer fabric with loose cuffs show the silk beneath.

Dante Gabriel Rossetti referred to the painting in his comments on his poem “For Spring, by Sandro Botticelli”:

“What masque of what old wind-withered New-Year
Honors this Lady? Flora, wanton-eyed
For birth, and with all flowrets prankt and pied”

Botticelli was an Italian painter of the Early Renaissance who belonged to the Florentine School under the patronage of Lorenzo de’ Medici.

His mythological masterpieces are his best-known works today. However, he painted a range of religious subjects and portraits.

He and his workshop were primarily known for their many beautiful Madonna and Child paintings. He lived all his life in the same neighborhood of Florence.

His only significant time elsewhere was the few months he spent painting in Pisa in 1474 and his work at the Sistine Chapel in Rome in 1481–82.

Portrait of a Lady Known as Smeralda

Women in the paintings of Botticelli