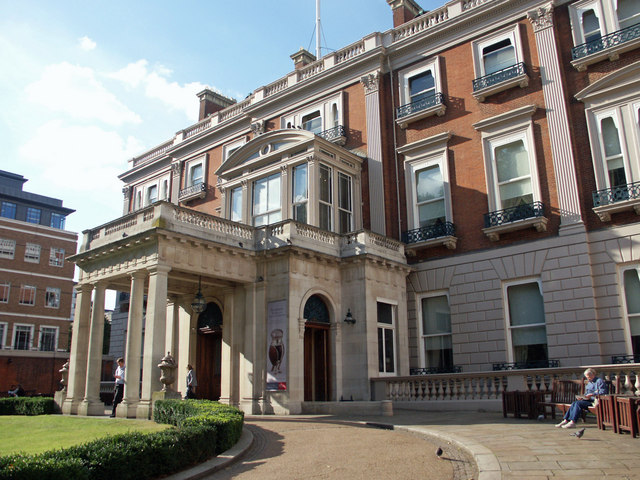 The Wallace Collection is an art collection housed at Hertford House in Manchester Square, the former townhouse of the Seymour family, Marquesses of Hertford.

Its collection comprises an extraordinary range of fine and decorative arts from the 15th to the 19th centuries with a significant collection of French 18th-century paintings, furniture, porcelain, and Old Master paintings.

Virtual Tour of the Wallace Collection

The Wallace Collection consists of nearly 5,500 objects and is reputed for its quality of eighteenth-century French paintings, Sèvres porcelain, and French furniture.

Highlights Tour of the Wallace Collection

“The Laughing Cavalier” by Frans Hals

“The Laughing Cavalier” by Frans Hals is famous for the lively and spontaneous style of portraiture created by the Dutch Golden Age Master. The subject is not laughing but has an enigmatic smile, amplified by his upturned mustache.

The painting conveys a sense of jesting and swagger that is the effect of the low viewpoint together with the sitter’s upturned mustache, sparkling eyes, pointy beard, shiny nose, pink cheeks, large black hat, and confident pose.

The portrait is richly colored with an extravagant costume of a doublet embroidered with fanciful motifs in white, gold, and red thread and with a gilded rapier pommel at the crook of his elbow.

Wealth is a young woman with paler skin who dances with golden sandals and robe; she is reluctantly reaching out to Labor’s hand. Pleasure is the young woman in blue who gazes at the viewer with a smirk and a flushing face.

Perseus is portrayed as attacking the sea monster, who turns to attack the hero, while Andromeda’s white body is contrasted against the dark undercliff and portrayed as pure innocence.

In Greek mythology, Andromeda was the daughter of the Ethiopian King Cepheus and Queen Cassiopeia. Queen Cassiopeia was beautiful, but the vain, and her hubris led her to boast that Andromeda is more beautiful than the sea nymphs.

In retaliated Poseidon calling up a sea monster to wreak havoc on Ethiopia, placing the kingdom at risk. In response, the Queen, together with the King, decided to sacrifice her daughter, Princess Andromeda, to the monster.

The Happy Accidents of the Swing by Jean-Honoré Fragonard

He is clearing the flower bush with his hat for a better view. As the young lady swings higher, she throws her left leg up, allowing her shoe to fly through the air. An older man in the shadows on the right is propelling and guiding the swing with a pair of ropes.

The older man appears to be unaware of the younger man. Fragonard has added two statues in the form of putti, depicted as a chubby male child, to the composition to elaborate the narrative.

“The Lady with a Fan” by Diego Velázquez

“The Lady with a Fan” by Diego Velázquez depicts a woman wearing a black lace veil on her head and a dark dress with a low-cut bodice.

It is an enigmatic portrait as there is no documentary information about the portrait; the sitter’s identity has not yet conclusively been verified.

Most other Velázquez portraits are recognizable likenesses of the members of the Spanish royal family, their courtiers, and court servants.

The details of the costume suggest that the sitter could be Marie de Rohan, the Duchess of Chevreuse, as she is dressed according to the French fashion of the period.

There is documented evidence that Velázquez painted a Frenchwoman, in a letter dated 1638. Velázquez claims to have portrayed the exiled Duchess of Chevreuse, who was then living in Madrid under the protection of the King.

The letter claims that the Duchess had escaped from France disguised as a man. However, other experts argued at the features of the sitter differ remarkably from other images of the Duchess.

“The Rising of the Sun” by François Boucher

The foreground is populated by the nude bodies of nymphs and naiads. They overlap with one another to create a series of curves that are echoed in the forms of the waves.

“The Setting of the Sun” by François Boucher

Louis XIV was the first of the French Kings to encourage the title of “Sun King” because he employed the theme of the chariot of Apollo at Versailles to suggest that he was the new Apollo.

Map for the Wallace Collection

An introduction to the Wallace Collection

Canaletto and the Vedute Room at the Wallace Collection

“I would venture to warn against too great intimacy with artists as it is very seductive and a little dangerous.”
– Queen Victoria