Wealth is a young woman with paler skin who dances with golden sandals and robe; she is reluctantly reaching out to Labor’s hand.

Pleasure is the young woman in blue who gazes at the viewer with a smirk and a flushing face.

An earlier interpretation was that the circle of figures symbolizes the Seasons Dance to the music played by Father Time on his lyre.

Autumn is here represented as Bacchus, the god of wine. The other seasons follow in turn as Winter, Spring, and Summer.

The two cherubs or cupids, one blowing bubbles and the other holding an hourglass allude to the transience of life.

The monument on the far left, consisting of a four-sided shaft tapering inward towards the bottom. It bears a double-headed bust, which depicts the youthful and mature Bacchus.

The scene is set in the early morning, with Aurora, goddess of dawn, preceding the chariot of Apollo, the sun-god in the sky. The Hours follow him as Apollo holds a ring representing the Zodiac.

As Poussin developed the painting, the theme appears to have transformed from the “Four Seasons Dance” into the concept of the “Cycle of Life and Fortune.”

This painting was created by a Roman patron who later became Pope Clement IX. The future Pope may have been influential in the changing of the theme. 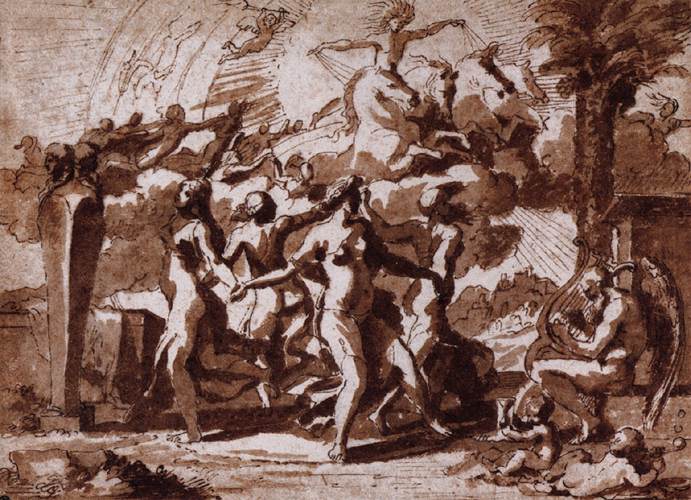 An early pen and brown ink on a paper sketch by Nicolas Poussin shows how the painting was planned and has evolved. From the National Gallery of Scotland.

He returned to Paris for a brief period to serve as First Painter to the King under Louis XIII and Cardinal Richelieu.

However, he soon returned to Rome and resumed his more traditional themes. He was a major inspiration for such classically oriented artists as Jacques-Louis David, Jean-Auguste-Dominique Ingres, and Paul Cézanne.

A Dance to the Music of Time

Nicholas Poussin Dance to the Music of Time

A Tour of London’s Museums and Heritage Sites

“There is no place for grief in a house which serves the Muse.”
– Sappho