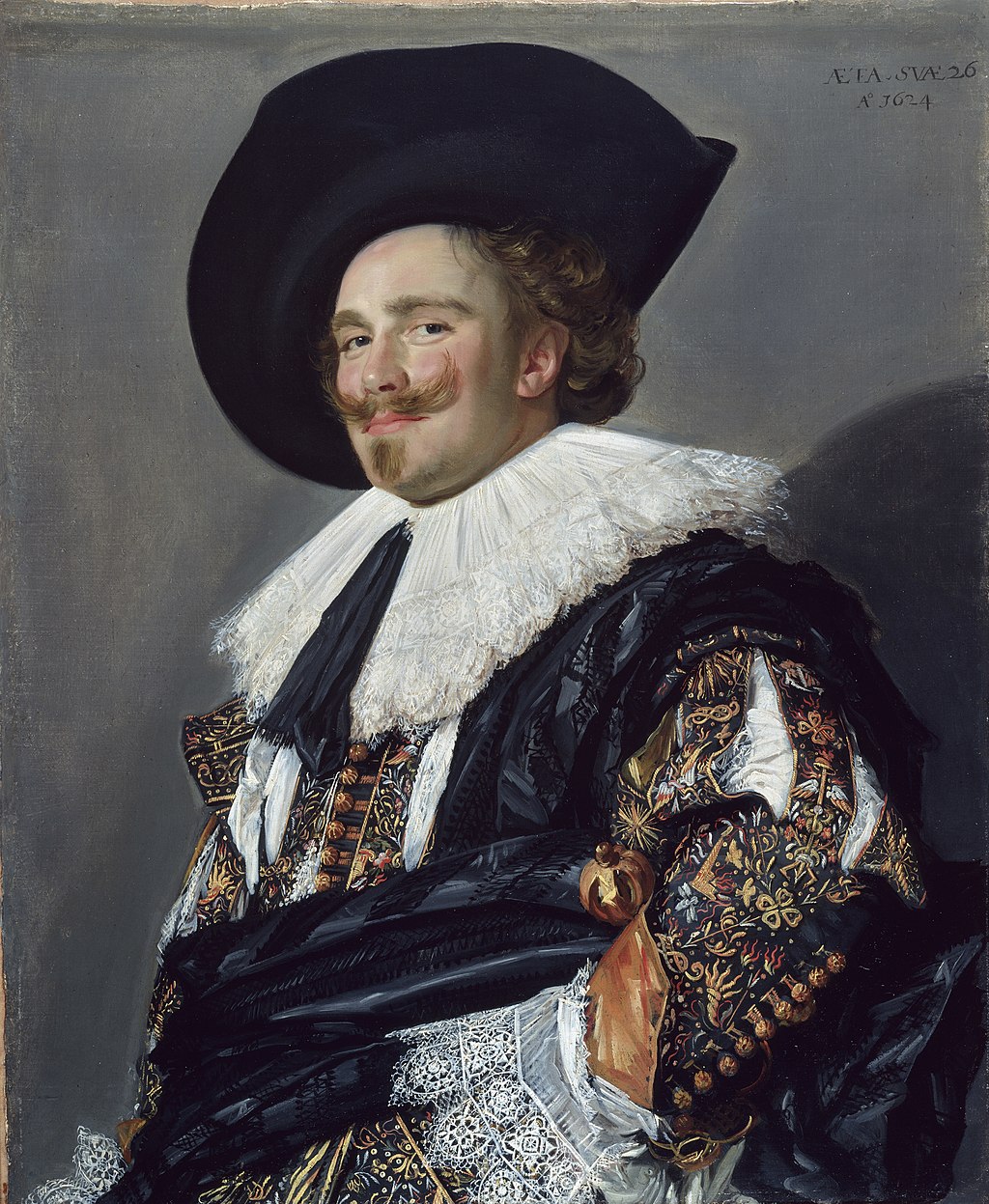 “The Laughing Cavalier” by Frans Hals is famous for the lively and spontaneous style of portraiture created by the Dutch Golden Age Master. The subject is, in fact, not laughing but has an enigmatic smile, amplified by his upturned mustache.

The painting conveys a sense of jesting and swagger that is the effect of the low viewpoint together with the sitter’s upturned mustache.

The portrait is richly colored with a flashy costume of a doublet embroidered with fanciful motifs in white, gold, and red thread and with a gilded rapier pommel at the crook of his elbow.

The title is an invention of the Victorian press, dating from its first exhibition in 1872–75 soon after it arrived in England.

It was reproduced in large quantities as a print and became among the best known old master paintings in Britain. The identity of the man is unknown.

The recorded 1800’s titles mostly suggest a military man or officer in one of the part-time militia companies. The painting is inscribed with the date of 1624 and the sitter’s age, who was 26 years old.

Up close, this painting is captivating with its powerful technique. The vivid colors, differing textures, and details of the costume are brilliantly captured in the fluid and expressive brushwork by Frans Hals.

Frans Hals, together with Rembrandt van Rijn and Johannes Vermeer, dominated the Golden Age of Dutch Art in the 1600s.

Many of Frans Hals’s individual and group portraits can be found in museums across the world, depicting all types of people from the Dutch Golden Age.

Frans Hals the Elder (1582 – 1666) was a Dutch Golden Age painter, usually of portraits, who lived and worked in Haarlem, a city in the Netherlands. He is notable for his loose painterly brushwork, and he helped introduce this lively style of painting into Dutch art. Hals played an essential role in the evolution of 17th-century group portraiture.

Dutch Golden Age painting refers to a period in Dutch history roughly spanning the 17th century, during and after the later part of the Eighty Years’ War (1568–1648) for Dutch independence

. The new Dutch Republic was the most prosperous nation in Europe and led European trade, science, and art.

The northern Netherlandish provinces that made up the new state had traditionally been less critical artistic centers than cities in Flanders in the south.

The upheavals and large-scale transfers of people during the war, and the break with the old monarchist and Catholic cultural traditions meant that Dutch art had to reinvent itself.

The painting of religious subjects declined sharply, but a significant new market of secular subjects developed.

Dutch art of the Golden Age lacks the idealization and love of splendor typical of much Baroque work of the time, including that of neighboring Flanders.

Most work, including that for which the period is best known, reflects the traditions of detailed realism inherited from Early Netherlandish painting.

The Laughing Cavalier by Frans Hals

Quotes About Laughing and Laughter

“The art of medicine consists of amusing the patient while nature cures the disease.”
– Voltaire

“There is nothing in the world so irresistibly contagious as laughter and good humor.”
– Charles Dickens

“I love people who make me laugh. I honestly think it’s the thing I like most, to laugh. It cures a multitude of ills. It’s probably the most important thing in a person.” –
Audrey Hepburn

“To truly laugh, you must be able to take your pain and play with it.”
– Charlie Chaplin

“A good laugh is a mighty good thing, a rather too scarce a good thing.”
– Herman Melville

“Always laugh when you can. It is cheap medicine.”
– Lord Byron

“The only real laughter comes from despair.”
– Groucho Marx

“Even the gods love jokes”
– Plato

“As soap is to the body, so laughter is to the soul.”
– Jewish Proverb

“The human race has only one really effective weapon and that is laughter.”
– Mark Twain

“It was her habit to build up laughter out of inadequate materials.”
– John Steinbeck, The Grapes of Wrath

“From there to here, from here to there, funny things are everywhere.”
– Dr. Seuss

“God is a comedian playing to an audience too afraid to laugh.”
– Voltaire

“You have as much laughter as you have faith.”
– Martin Luther

“I don’t trust anyone who doesn’t laugh.”
– Maya Angelou

“If you want to tell people the truth, make them laugh, otherwise they’ll kill you.”
–  George Bernard Shaw

“I am the happiest creature in the world. Perhaps other people have said so before, but not one with such justice. I am happier even than Jane; she only smiles, I laugh.”
– Jane Austen, Pride and Prejudice

“And we should consider every day lost on which we have not danced at least once. And we should call every truth false which was not accompanied by at least one laugh.”
– Friedrich Nietzsche

“Forgive your enemies, but never forget their names.”
– Dutch Proverb