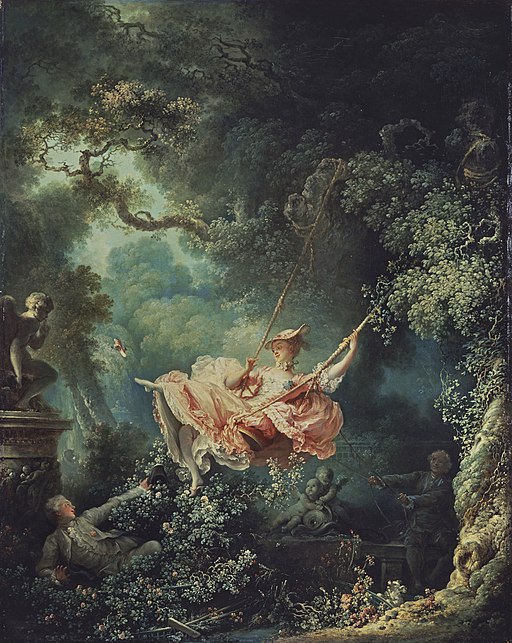 “The Happy Accidents of the Swing” by Jean-Honoré Fragonard

He is clearing the flower bush with his hat for a better view. As the young lady swings higher, she throws her left leg up, allowing her shoe to fly through the air.

An older man in the shadows on the right is propelling and guiding the swing with a pair of ropes. The older man appears to be unaware of the younger man.

Fragonard has added two statues in the form of putti, depicted as a chubby male child, to the composition to elaborate the narrative.

This painting is also known as “The Swing,” is considered to be one of the masterpieces of the Rococo era and is Fragonard’s best-known work. T

he style of the painting was characteristic of the French Rococo period and was favored by the wealthy art patrons of the 1780s.

This style of “frivolous” painting soon became the target of the philosophers of the Enlightenment, who demanded a more serious art to show the nobility of man.

The Rococo style began in France in the first part of the 18th century in the reign of Louis XV as a reaction against the more formal and geometric form.

It soon spread to other parts of Europe, mainly northern Italy, Bavaria, Austria, other parts of Germany, and Russia. It also came to influence the other arts, particularly sculpture, furniture, silverware and glassware, painting, music, and theatre.

The iconography of putti is fluid so that it is difficult to tell the difference between putti, cupids, and various forms of angels.

They have no unique, immediately identifiable attributes, so that putti may have many meanings and roles in the context of art.

Jean-Honoré Fragonard became a prominent painter within the Rococo artistic movement, which was filled with light colors, asymmetrical designs, and curved, natural forms.

The Rococo style emerged in Paris during the eighteenth century, more specifically during the reign of Louis XV.

Fragonard produced more than 550 paintings, and among his most famous works are genre paintings conveying an atmosphere of intimacy and veiled eroticism.

A Tour of London’s Museums

Secrets of the Wallace: The Swing by Jean-Honoré Fragonard (1767)

Twitter Feedback on “The Swing” by Jean-Honoré Fragonard – Feb 7, 2020

Question: What story do you see in this painting?

What story do you see in this painting?https://t.co/zjWMIaIFUU

“When I saw the beauty of the Raphaels, I was moved to tears, and I could scarcely hold my pencil.”
– Jean-Honoré Fragonard