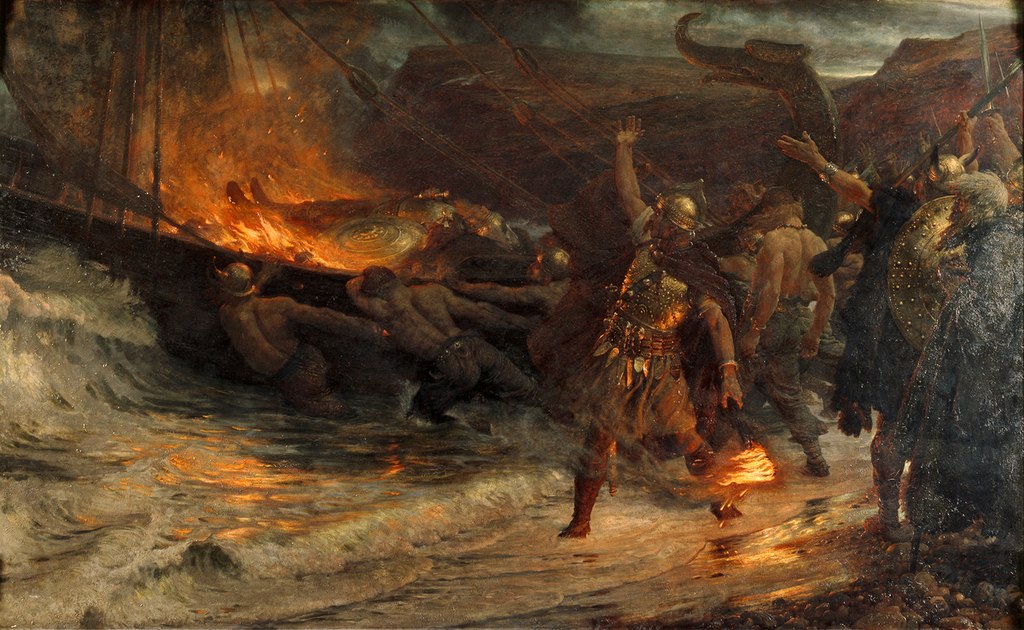 “The Funeral of a Viking” by Frank Dicksee

The recumbent body of the dead Viking is fully armored and surrounded by flames as he lies on a burning pyre in a Viking Ship.

The Viking boat has a stern carved into the form of the head of a mythical beast. It is being hauled into the rough sea and pushed out to sea by muscular Vikings.

Standing on the shore are a crowd of Viking men and soldiers with arms and weapons raised as the burning ship is pushed out.

The most prominent of these figures is that of an armored man wearing a crested helmet and a breast-plate with raised ornamentation. With his right arm raised, he salutes his leader while holding a flaming torch in his left.

The scene is illuminated by the glow of the burning pyre and the torches. They reflect in the water and on the glistening shore. In the background are austere, rocky mountains that can be seen under a dark and stormy sky.

The vantage point that Dicksee has composed invites the viewer to be part of the crowd gathered on the windy shore to participate in this ancient ceremony.

This painting illustrated the distinguished tradition of Viking Ship burial, where the deceased was laid in a boat, and given grave offerings aligned to their earthly status, sometimes including sacrificed slaves.

Dicksee also designed the frame for this painting. The frame is gilt, carved wood, decorated with classical motifs. Included is a running chain pattern, which is a feature of the Viking Borre style of ornament, which flourished in the 9th and 10th centuries.

Victorian critics gave the painting positive reviews for its dark and dramatic depiction but were not as glowing about its staged setting.

Dicksee was inspired by a funeral scene in the Anglo Saxon poem Beowulf and the discovery of a Viking ship burial, which was excavated in 1893, in Gokstad, Norway.

The shortage of authentic Viking artifacts at the time meant that Dicksee had to draw on an artistic mix of Viking shields, Roman body armor, and Celtic horned helmets.

The ship burial is a Viking funeral practice traditionally reserved for individuals of high honor. The practice includes the burying of the individual within a ship, using the boat to contain the departed and their grave goods.

These grave goods featured decorative ornamentation that far exceeded the extravagance of traditional burials. Additionally, animal remains such as oxen or horses tended to be buried within the ship.

Vikings believed that fire and water would combine to release the spirit, allowing the heroic warrior to enter Valhalla, the god Odin’s glorious Hall of the Slain.

The ships tended to be ships of pleasure rather than ships utilized for war. Some ships were commissioned specifically as Funeral ships and were designed without seats or for extensive travel or combat.

The burial customs of Viking Age North Germanic Norsemen are known both from archaeology and from historical accounts such as the Icelandic sagas and Old Norse poetry.

Francis  Dicksee (1853 – 1928) was a painter and illustrator, best known for his pictures of dramatic literary, historical, and legendary scenes.

He also was a noted painter of portraits of fashionable women, which helped to bring him success in his own time.

The Funeral of a Viking

“Fear not death for the hour of your doom is set and none may escape it.”
– Volunga Saga