Alaska borders the Canadian province of British Columbia and territory of Yukon to the east and southeast and has a maritime border with Russia to the west. To the north is the Arctic Ocean, while the Pacific Ocean lies to the south and southwest.

Alaska is the largest U.S. state by area but about half of Alaska’s residents live in the Anchorage metropolitan area. The state capital of Juneau is the second-largest city by area in the United States.

Various indigenous peoples occupied Alaska for thousands of years before the arrival of Europeans. The western geography of Alaska was the entry point for human migration and settlement into the Americas by way of the Bering land bridge.

The Russians were the first Europeans to settle the area beginning in the 18th century; however, the expense and difficulty of maintaining this distant territory prompted its sale to the U.S. in 1867.

Alaska was admitted as the 49th state of the U.S. in 1959. Today, the state’s economy is dominated by the industries of fishing, natural gas, oil, and tourism.

Over half of Alaska is federally owned public land, including many national forests, parks, and wildlife refuges.

Alaska’s indigenous population is over 15 percent of the state, with about two dozen native languages spoken.

The Ceremonial Start of the Iditarod dog sled race – Alaska 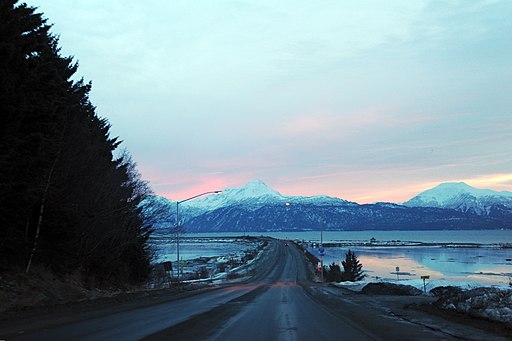 The Sterling Highway in Homer, Alaska

Virtual Tour of the Museums in Alaska

Highlights Tour of the Museums in Alaska

The Anchorage Museum is an art, history, ethnography, ecology, and science museum dedicated to studying and exploring the land, peoples, art, and history of Alaska.

The museum opened in 1968 and today has a collection of 25,000 objects and 500,000 historic photographs. The museum is also home to the Alaska office of the Smithsonian’s Arctic Studies Center.

The Anchorage Museum serves a statewide mission with its exhibits shared with other museums in Alaska, such as the museums in Unalaska, Bethel, Homer, Ketchikan, Kenai, Fairbanks, Kodiak, Eek, and Juneau.

University of Alaska Museum of the North, Fairbanks

The University of Alaska Museum of the North acquires, conserves, and interprets specimens and collections relating to the natural, artistic, and cultural heritage of Alaska and the North Polar Regions.

The museum serves national and international science programs through education, research, and exhibits. The museum’s collections include botanical, geological, zoological, and cultural displays.

The museum’s new facilities opened in 2005, with exhibitions and galleries focused on understanding the past and present issues unique to the North.

The museum’s exhibits range from hibernation research to the documenting of a dinosaur expedition along the Yukon River.

The University of Alaska Museum of the North’s outreach programs include exhibits, print, and digital media, such as full-motion and animated films, audio series, and interactive games.

Museum of the North – 360 Virtual Tour

The Alaska State Museum was established in 1900 as the Historical Library and Museum for the District of Alaska. The Museum’s purpose is to collect, preserve, and exhibit cultural materials from across Alaska.

The Alaska State Museum houses collections that include cultural materials from:

the people of the Northwest Coast
the Athabascan cultures of Interior Alaska
the Inupiaq of the north coast
the Yup’ik of the southwest of Alaska
the Alutiiq people of Prince William Sound and Kodiak Island
the Unangax from out along the Aleutian chain.