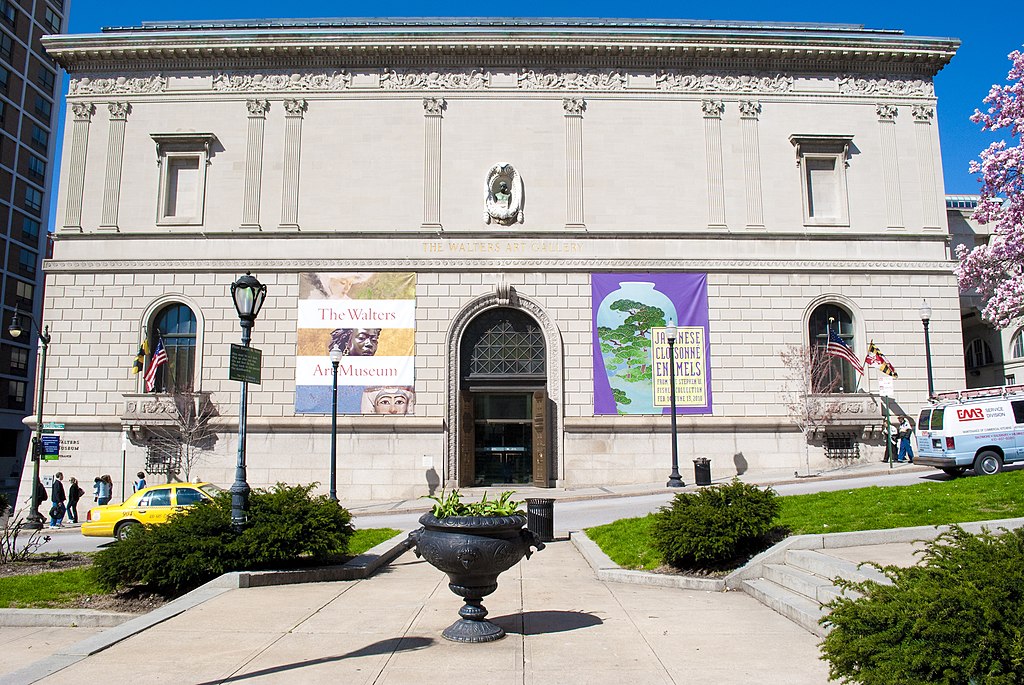 The Walters Art Museum is an art museum with a collection that includes masterworks of ancient Egypt, Mesopotamian, Greek and Rome, medieval and  Renaissance artworks,  Master European and 19th-century paintings.

Including Chinese ceramics and bronzes, plus Art Deco jewelry.

A Virtual Tour of the Walters Art Museum

“The Duel After the Masquerade” by Jean-Léon Gérôme

“The Duel After the Masquerade” by Jean-Léon Gérôme depicts a man dressed as a Pierrot who has been mortally wounded in a sword duel.

He has collapsed into the arms of a friend. A surgeon, dressed as a Doge of Venice, tries to stop the flow of blood, while the third person dressed as a priest clutches his head.

The scene is set on a grey winter morning in forest, trees bare and snow covering the ground.

This Ancient Sumerian calcite-alabaster figurine of a male worshipper was created sometime in 2300 BC. The shaven head is a sign of ritual purity, which may also identify this figure as a priest.

A partly preserved inscription on the right shoulder states that he prays to Ninshubur. Ninshubur was a vassal and friend of the goddess Inanna in Sumerian mythology; her name means “Queen of the East” in ancient Sumerian.

Much like Iris or Hermes in later Greek mythology, Ninshubur served as a messenger to the other gods.

Padiiset’s Statue is a basalt statue found in the Egyptian delta, which includes an inscription referring to trade between Canaan and Ancient Egypt. It is the last known Ancient Egyptian reference to Canaan.

This reference to Canaan is more than 300 years after the previously known inscriptions with the name of Canaan.

The statue was created in the 1780-1700 BC period to commemorate a government vizier.

A millennium later, the original inscription was erased and replaced with inscriptions on the front and back to representing “Pa-di-iset, son of Apy” and worshipping the gods Osiris, Horus, and Isis.

Mummy Portrait of a Bearded Man

These types of Mummy portraits are also called Fayum mummy portraits. It is a type of naturalistic painted portrait on wooden boards attached to Egyptian mummies from the Coptic period.

These Mummy portraits belong to the tradition of panel painting, which was a highly regarded art form in the Classical world. Fayum pictures are the only significant body of art from that tradition to have survived.

While painted cartonnage mummy cases date back to pharaonic times, the Faiyum mummy portraits were an innovation dating to the Coptic period.

“The Sailor’s Wedding” by Richard Caton Woodville depicts a wedding party that has interrupted a justice of the peace in the course of his dinner.

Woodville successfully demonstrates his powers of characterization with his attention to the composition and the details in this painting.

“Woman in Blue Combing Her Hair” by Goyō Hashiguchi

“Woman in Blue Combing Her Hair” by Goyō Hashiguchi is a color woodblock print, from 1920’s Japan. Goyo had a late calling to traditional Japanese Woodblock Printing after a career of illustration in other media.

He was inspired by the old techniques and admiration for the great portraits of beautiful women by Kitagawa Utamaro (1753 – 1806). Goyo’s extraordinarily beautiful and technical excellent woodblock prints are among the most sought-after Japanese prints.

“Geisha Hisae with a Towel” by Goyō Hashiguchi

“Geisha Hisae with a Towel” by Goyō Hashiguchi is a color woodblock print. The artist had a late calling to the traditional woodblock print after a career of illustration in other media.

The exceptional wood cutting of the blocks to portray the intricacies of women’s hair was a Ukiyo-e tradition that Goyo had enthusiastically revived.

The prints’ impact was enhanced by his restricted palette of a few primary colors.

“Woman Applying Color to Her Lips” by Goyō Hashiguchi

“Woman Applying Color to Her Lips” by Goyō Hashiguchi is a color woodblock print, from Japan. Goyō Hashiguchi’s perfectionism led to publishing only a handful of prints, each one technically excellent with a nostalgic passion for the art of the period.

The exceptional wood cutting of the black blocks to portray the intricacies of women’s hair was a Ukiyo-e tradition that Goyo has enthusiastically revived.

To ensure a significant impact, he also restricted his palette to a few colors. Hashiguchi had a short period of only two years to produce these superb masterworks, apart from his first print published with Watanabe before he died aged forty-two.

“Woman Powdering Her Neck” by Goyō Hashiguchi is a color woodblock print. Goyō Hashiguchi’s blocks for fourteen prints and many of the prints were destroyed in the Great Kantō earthquake of 1923.

Most reprints are marked with a small seal in the side margin, something which does not appear on original prints. Today works by Goyō are among the most highly prized of all Shin-Hanga prints.

This exquisite portrait of Emperor Marcus Aurelius captures the melancholy temperament of the philosopher and author of “Meditations,” which were his reflections on life.

The drooping eyelids and detached gaze suggest his contemplative nature. The smooth modeled carving of the face contrasts markedly with the thick, curling hair and beard.

This marble bust was created between 161 and 180, during the last years of his life.

“Sappho and Alcaeus” by Lawrence Alma-Tadema

“Sappho and Alcaeus” by Lawrence Alma-Tadema depicts the poet Alcaeus of Mytilene playing the kithara for the poet Sappho, accompanied by several of her female friends.

Sappho is paying close attention to the performance, resting her arm on a cushion which bears a laurel wreath, intended as a gift for the performer.

Diogenes by Jean-Léon Gérôme depicts the Greek philosopher Diogenes (404 – 323 BC) seated in the shelter he used during the night.

Diogenes made a virtue of poverty. He begged for a living and often slept in a large ceramic jar in the marketplace.

“Oedipus and the Sphinx” by Jean-Auguste-Dominique Ingres

“Oedipus and the Sphinx” by Jean-Auguste-Dominique depicts the Sphinx as it grimaces in horror as Oedipus solves her riddle. A Shinx is a mythical creature, part lion, part woman.

Ingres frequently repeated the subjects of his paintings, first depicted this story at the beginning of his career, and returned to it several times, making variations in the composition, such as reversing the direction in which the figures faced.

In 1864 Ingres painted this third version of Oedipus and the Sphinx, smaller than the first version, which reverses the composition and varies many details.

“Diana Reposing” by Paul-Jacques-Aimé Baudry depicts the nude goddess, identified by the crescent moon in her hair and the bow and quiver at her side.

Baudry composition shows Dianna reclined on a blue drapery in front of a stag in a woodland setting. In their worship of the goddess, the Greeks filled their temples with sculptures of the goddess.

Many of the statues were adapted for use in the worship of Diana by the Romans. Diana was usually depicted for educated Romans in her Greek guise.

Diana was often shown accompanied by a deer; this was symbolic of her role as the patroness of hunting.

The deer also a reference to the myth of Acteon, who saw her bathing naked. Diana punished him by transformed Acteon into a stag and set his hunting dogs to kill him.

The Walters Art Museum in Baltimore – Tour and Overview

The Walters Art Museum in Baltimore

Map for the Walters Art Museum

Arts of Asia at the Walters Art Museum – Baltimore

Virtual Tour of the Museums in Baltimore