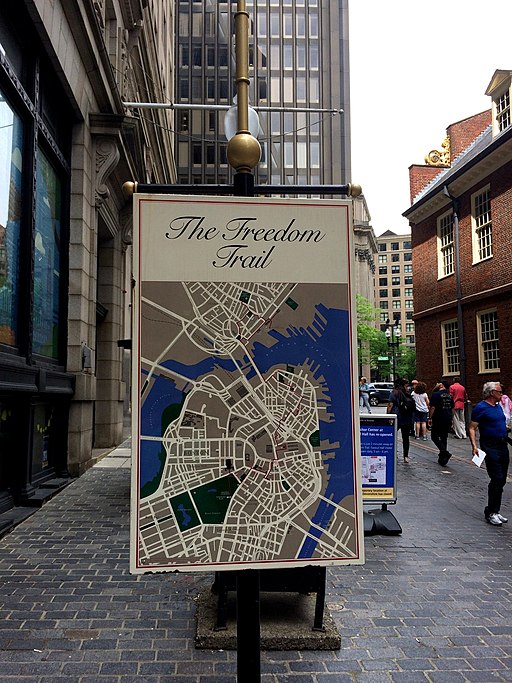 The “Freedom Trail” is a 2.5-mile-long (4.0 km) path through downtown Boston, that passes sixteen official locations that played a significant role in the history of the United States.

The trail is marked along the walking path by bricks and other signposts that starts at Boston Common and ends at the Bunker Hill Monument in Charlestown.

Highlights along the trail include historic sites, graveyards, churches, buildings, and a naval frigate. In addition to the formal 16 stops, there are many other historic monuments and sites along the trail such as  The Boston Irish Famine Memorial.

The Freedom Trail was conceived in 1951 and within a few years, tens of thousands of people started to walk the trail annually. Most of the sites have internal visit options of which some are free admission while some charge admission.

The Freedom Trail does not include all the historical locations in Boston, such as the sites of the Boston Tea Party and the Liberty Tree.

A visitor’s center at Faneuil Hall offers guided tours and maps of the Freedom Trail.

Virtual Tour of the Freedom Trail 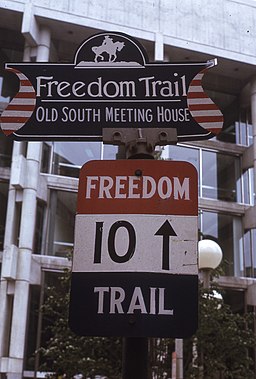 Highlights Tour of the Freedom Trail

Boston Common is the oldest city park in the United States and consists of 50 acres (20 ha) of land.

The land was purchased in 1634 by the Puritan founders of the Massachusetts Bay Colony. During the 1630s, it was used by many families as a cow pasture.

However, this only lasted for a few years, as affluent families bought additional cows, which led to overgrazing, a real-life example of the “tragedy of the commons”. Cows were formally banned from it in 1830.

The Common was used as a camp by the British before the American Revolutionary War, from which they left for the Battle of Lexington and Concord.

It was used for public hangings up until 1817, most of which were from a large oak which was replaced with a gallows in 1769.

In 1660, Quaker Mary Dyer was hanged there by the Puritans for defying a law that banned Quakers from the Colony. Dyer was one of the four Quakers executed on the Common and known as the Boston martyrs. 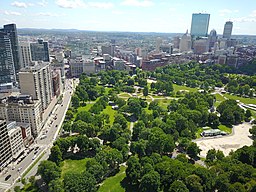 The Massachusetts State House is the state capitol for the Commonwealth of Massachusetts, located in Beacon Hill.

The building, designed by architect Charles Bulfinch, was completed in1798 at a cost of more than five times its budget.

It is considered a masterpiece of Federal architecture and among Bulfinch’s finest works. 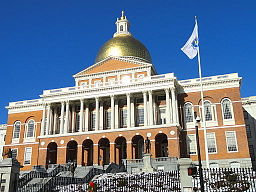 The Park Street Church founding dates to 1804 when the “Religious Improvement Society” began weekly meetings with lectures and prayer.

The church still holds to its Statement of Faith adopted in 1877 and after 200 years, the church is still engaged in current social issues.

The Granary Burying Ground is Boston’s third-oldest cemetery, founded in 1660.

It is the final resting place for many notable Revolutionary War-era patriots, including Paul Revere, the five victims of the Boston Massacre, and three signers of the Declaration of Independence: Samuel Adams, John Hancock, and Robert Treat Paine.

The cemetery has 2,345 grave-markers, but historians estimate that as many as 5,000 people are buried in it.

The cemetery’s Egyptian revival gate and fence were designed by architect Isaiah Rogers (1800–1869). 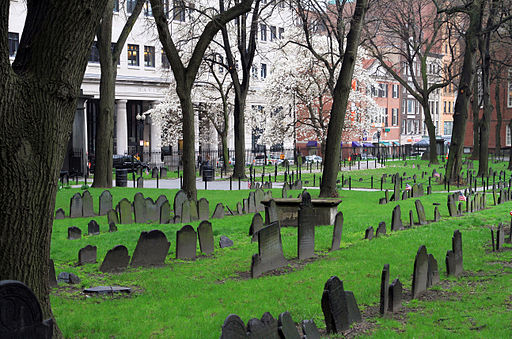 The King’s Chapel congregation was founded in 1686 as the first Anglican Church in colonial New England during the reign of King James II.

The original King’s Chapel was a wooden church built in 1688, where the church stands today.

It was situated on the public burying ground, now King’s Chapel Burying Ground because no resident would sell land for a church that was not Congregationalist, the then official religion of Massachusetts.

In 1749, construction began on the current stone structure, which was completed in 1754. The stone church was built around the wooden church.

When the stone church was complete, the wooden church was disassembled and removed through the windows of the new church.

Despite its name, the adjacent King’s Chapel Burying Ground is not affiliated with the chapel or any other church; it pre-dates the present church by over a century.

Today there are 505 headstones and 59 footstones remaining from the more than one thousand people buried in the small space since its inception. 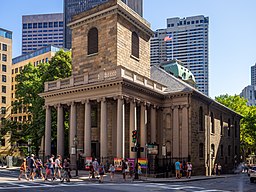 The Boston Latin School was established in 1635, making it the oldest public school in America and the oldest existing school in the United States.

The School was a bastion for educating the sons of the Boston elite, resulting in the school claiming many prominent New Englanders as alumni.

Its curriculum follows that of the 18th-century Latin school movement, which holds the classics to be the basis of an educated mind. 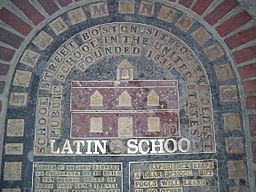 The Old Corner Bookstore is a historic commercial building built in 1718 as a residence and apothecary shop and first became a bookstore in 1828.

The site was formerly the home of Anne Hutchinson, who was expelled from Massachusetts in 1638 for heresy. 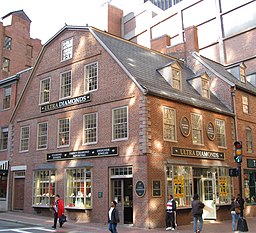 The Old South Meeting House is a historic Congregational church building built in 1729. It gained fame as the organizing point for the Boston Tea Party in 1773, as it was the largest building in Boston at the time.

After the Boston Massacre in 1770, yearly anniversary meetings were held at the church until 1775.

In 1773, 5,000 people met in the Meeting House to debate British taxation, and, after the meeting, a group raided three tea ships anchored nearby in what became known as the Boston Tea Party. 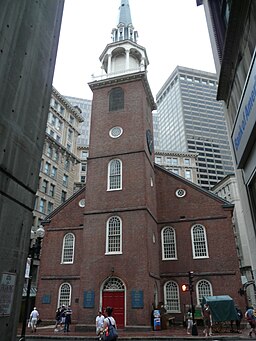 The Old State House was built in 1713, it was the seat of the Massachusetts General Court until 1798, and is one of the oldest public buildings in the United States.

It is the oldest surviving public building in Boston and now serves as a history museum. 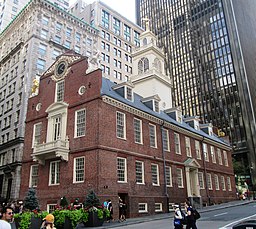 Site of the Boston Massacre

The Boston Massacre was a confrontation in 1770 in which British soldiers shot and killed several people while being harassed by a mob in Boston.

The event was heavily publicized by leading Patriots such as Paul Revere and Samuel Adams.

Depictions, reports, and propaganda about the event heightened tensions throughout the Thirteen Colonies.

Faneuil Hall is a marketplace and meeting hall which opened in 1743. It was the site of several speeches by Samuel Adams, James Otis, and others encouraging independence from Great Britain.

It was built in the style of an English country market, with an open ground floor serving as the market house, and an assembly room above. Some of Boston’s early slave auctions took place near Faneuil Hall.

In 1761, the hall was destroyed by fire, with nothing but the brick walls remaining. It was rebuilt by the town in 1762. In 1775, during the British occupation of Boston, it was used for a theatre.

The Paul Revere House was the colonial home of Paul Revere during the time of the American Revolution.

The original three-story house was built about 1680, making it the oldest house in downtown Boston.

Its first owner was Robert Howard, a wealthy slave merchant. Paul Revere owned this house from 1770 to 1800.

Old North Church is the location from which the famous signal is said to have been sent:

This phrase is related to Paul Revere’s midnight ride, in 1775, which preceded the Battles of Lexington and Concord during the American Revolution. 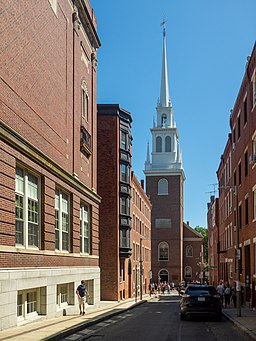 Copp’s Hill Burying Ground is a historic cemetery established in 1659, it was originally named “North Burying Ground”, and was the city’s second cemetery.

The USS Constitution, also known as Old Ironsides, is a wooden-hulled, three-masted heavy frigate of the United States Navy.

She is the world’s oldest commissioned naval vessel still afloat. She was launched in 1797, one of six original frigates authorized for construction by the Naval Act of 1794 and the third constructed. 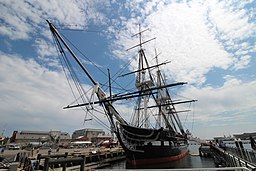 The Bunker Hill Monument was erected to commemorate the Battle of Bunker Hill.

It was among the first major battles between British and Patriot forces in the American Revolutionary War, fought there in 1775. 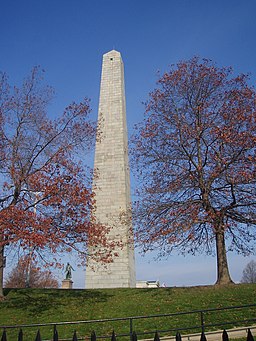 16 Stops on the Boston Freedom Trail

Guide to the Freedom Trail in Boston

“An investment in knowledge pays the best interest.”
– Benjamin Franklin