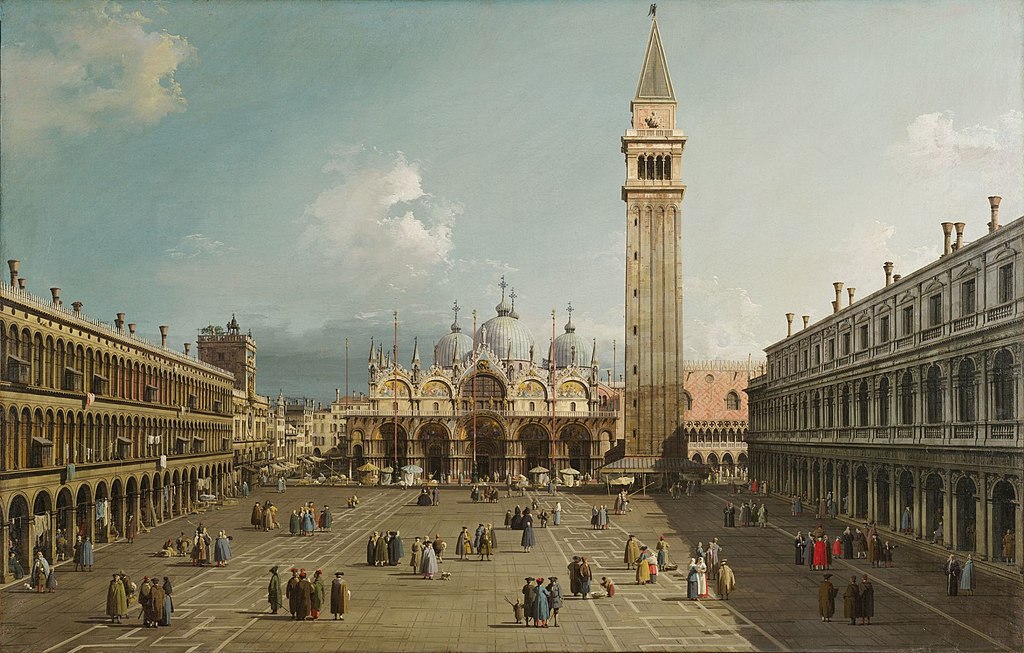 “Piazza San Marco with the Basilica, Venice” by Canaletto

The bell tower dominates the scene and represents a timeless view of Venice while also capturing the details of eighteenth-century life.

Piazza San Marco, often known as St Mark’s Square, is the social, religious, and political center of Venice. The Square is dominated at its eastern end by the great church of St Mark and the Campanile of St Mark’s church.

The foreground portrays the decorative marble pattern of stone pavements that had recently been laid just before this painting was made.

The marble pattern forms a sophisticated geometrical pavement design, of which little is known about the reasoning for the particulars of the design plan.

Some have speculated that the pattern was used to regulate market stalls or to recall their former presence in the square. Others believe the model was drawn from oriental rugs, a favorite luxury item in this trading center.

This Canaletto painting is a typical example of the vedute paintings popular with Grand Tour travelers of the 1700s as a visual record of their travels.

Canaletto was one of the more famous painters of city views or vedute, especially of Venice. From 1746 to 1756, he worked in England, where he created many paintings of the sights of London.

He was highly successful in England and became famous thanks to the British merchant and connoisseur Joseph Smith, who sold his extensive collection of Canaletto’s paintings to King George III in 1762.

Giovanni Antonio Canal (1697 – 1768), better known as Canaletto, who was born in Venice, is famous for his paintings of the city views of Venice, Rome, and London.

He was also a printmaker using the etching technique. Many of Canaletto’s paintings can be found in museums across the world, depict highly detailed, usually large-scale paintings of Venetian other famous cityscapes or vistas.

Piazza San Marco, also known in English as St Mark’s Square, is the principal public square of Venice, Italy. It is also called la Piazza or “the Square”, other open spaces in the city with a few exceptions are called campi (“fields”).

The Piazzetta (“little Piazza/Square”) is an extension of the Piazza towards the lagoon. The two spaces together form the social, religious, and political center of Venice. This article relates to both of them.

In 829, the relics of St Mark were stolen from Alexandria and brought to Venice, and the Venetians and the Doge adopted the apostle as their new patron.

The relic of the apostle increased the importance of the city. The acquisition of the relic was also a step in the gradual process of Venice freeing itself from the domination of Byzantium.

The relics were temporarily placed in the palace of the Doge. The Doge later provided in his will for a new church to be built. This first church of St Mark was begun on the south side of the existing chapel.

The design of the church was based on the Church of the Twelve Apostles in Constantinople. It covered the same area as the central part of the present church. The area of the Piazza was eventually defined by the erection of buildings on the north and south sides.

In 1204 Constantinople was captured in the course of the 4th Crusade. Subsequently, significant amounts of valuable building material and artifacts were taken from the city and shipped back for the adornment of Venice.

The plunder from Constantinople included marbles and pillars for the façade of St Mark’s and the four porphyry figures known as the Tetrarchs, which were eventually installed near the entrance to the Doge’s Palace.

In the later 13th century, St Mark’s was being given its new west façade embellished with marble and mosaics and trophies from Constantinople, including the four horses.

The Piazza was paved in the late 12th century with bricks laid in a herringbone pattern. Bands of light-colored stone ran parallel to the long axis of the main piazza.

These lines were used in setting up market stalls and in organizing various ceremonial processions. In 1723 the bricks were replaced with a more complex geometrical pavement design, as can be seen in this painting by Canaletto.

The Piazza San Marco is not much above the sea level, and during storm surges or heavy rain, it is quick to flood. Today, when the sea is high, the water from the lagoon is fast to rush up into the Square.

A Tour of the Harvard Art Museums

“There is something so different in Venice from any other place in the world, that you leave at once all accustomed habits and everyday sights to enter an enchanted garden.”
– Mary Shelley