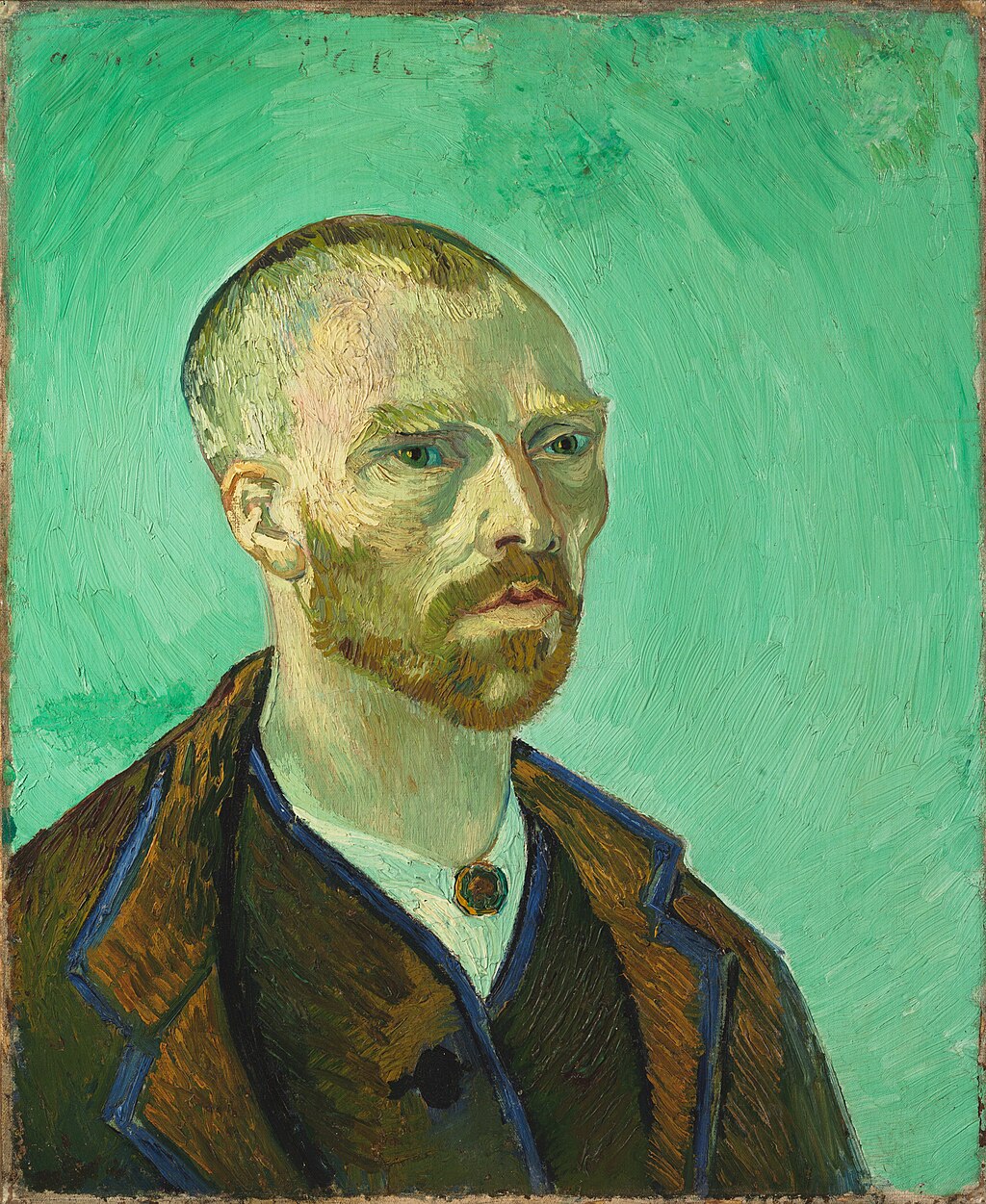 “Self Portrait, dedicated to Paul Gauguin” by Vincent van Gogh

“Self Portrait, dedicated to Paul Gauguin” by Vincent van Gogh is a self-portrait depicting his face as it appeared in the mirror. His right side in the image is, in reality, the left side of his face.

Van Gogh’s painted dozens of self-portraits. They were an essential part of his work as a painter.

Vincent van Gogh wanted to reinvent painting through the genre of portraiture, he encouraged other artists to paint themselves, and then to exchange the canvases.

Van Gogh received self-portraits from Emile Bernard, and Gauguin and Van Gogh sent this portrait to Gauguin with the inscription “To my friend Paul Gauguin.”

He described the process of creating his painting in several letters to his brother Theo, an art dealer in Paris. Van Gogh explaining how he modeled his features influenced by Japanese prints.

He added color effect with the contours of his jacket and painted the background in a “pale Veronese green” without shadows.

Van Gogh suffered from psychotic episodes and delusions; he often neglected his physical health, did not eat properly, and drank heavily.

His friendship with Gauguin ended after a confrontation with a razor when in a rage, he severed part of his left ear. Soon after, Gauguin sold this painting.

Van Gogh spent time in psychiatric hospitals, however, his depression continued, and on 27 July 1890, Van Gogh shot himself in the chest with a revolver. He died at 37 years of age from his injuries two days later.

Vincent van Gogh began his deep interest in Japanese prints when he discovered magazine illustrations of artwork. He was fascinated by woodblock prints using Japanese techniques that depicted Japanese life.

In 1885, van Gogh started collecting ukiyo-e prints that could be bought in small Parisian shops.

Van Gogh shared these prints with his contemporaries and organized a Japanese print exhibition in Paris in 1887. One version of Van Gogh’s Portrait of Pere Tanguy (1887) featured a backdrop of Japanese prints.

In late July 1890, Van Gogh was shot in the stomach and died two days later. Until recently, everyone assumed that  Van Gogh shot himself; however, recent biographers have challenged the conventional account of the artist’s death.

They argue that it was unlikely that van Gogh killed himself, noting the upbeat disposition of the paintings he created immediately preceding his death. They also highlight his private correspondence in which Van Gogh described suicide as sinful and immoral.

There are many other inconsistencies in the assumption that Van Gogh was responsible for the shot. The alternative hypothesis is that Van Gogh did not commit suicide but instead was a possible victim of foul play.

Biographers now postulate that after he was fatally wounded, Van Gogh welcomed death and believed his tormentors had done him a favor.

“Do not accuse anyone… it is I who wanted to kill myself.”

We will never know the truth, but this controversy is now part of the legacy of the mystery of Van Gogh’s life.

Self Portrait (dedicated to Paul Gauguin)