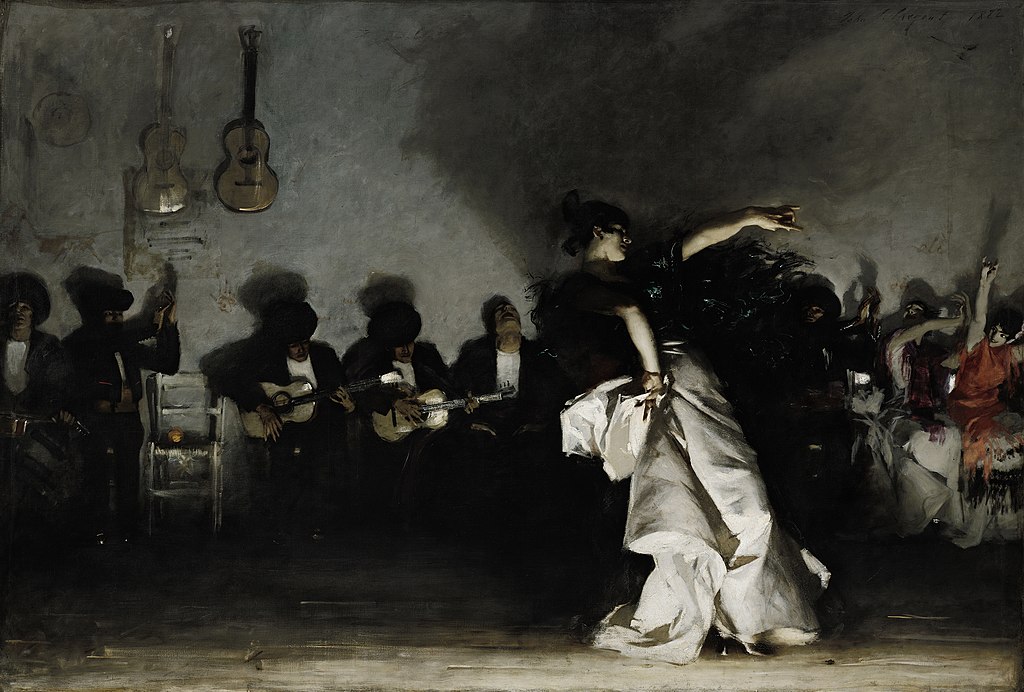 “El Jaleo” by John Singer Sargent is a 12 feet (3.7 m) broad canvas depicting a Spanish Gypsy dancer performing to the accompaniment of musicians.

Sargent’s restrained coloring dramatizes the contrast between the dark background and the shining white skirt of the dancer.

The dress is painted to suggest movement, and the lighting creates shadows on the rear wall that capture the progress of the dancer.

The title of the painting, El Jaleo, refers to both the meaning of jaleo, a ruckus, as well as the specific dance known as jaleo de Jerez.

The dancer is wearing a large, embroidered shawl wrapped around her shoulders with the outstretched arm.

The dancer is depicted in the flamenco dance technique and style. Space and lighting communicate the energetic rhythms of the dance, its sound, and movement.

The painting is an example of John Singer Sargent’s Impressionism, and an example of Hispanism, the phenomenon of fascination with Spanish culture in the nineteenth and early twentieth century.

Sargent made Aatrip through Spain, and North Africa in 1879 inspired the painting. The painting is related to a series of works Sargent painted during a subsequent stay in Venice.

The painting was preceded by a series of preliminary studies, focusing mainly on the dancer’s stylized posture.

In 1914,  El Jaleo was exhibited at the Isabella Stewart Gardner Museum, in a uniquely constructed Spanish Cloister gallery framed by a Moorish arch.

Sargent was so impressed he also presented Isabella Stewart Gardner with an album of drawings he had made as preparatory sketches for the work. 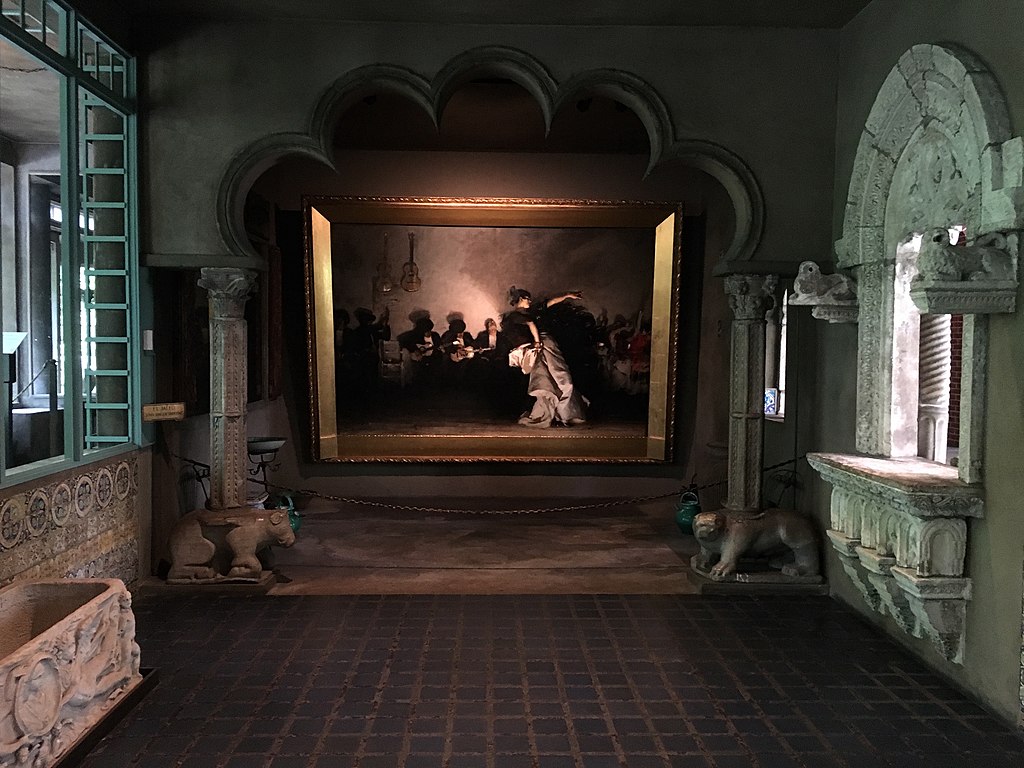 Flamenco is an art form based on the various folkloric music traditions of Andalusia in southern Spain. Flamenco has been influenced by and associated with the Romani people in Spain; however, its origin and style are uniquely Andalusian.

Flamenco developed through the cross-cultural interchange between Andalusians, Romani, Castilians, Moors, and Sephardi Jews during the Moorish occupation.

The Flamenco Dance is known for its emotional intensity, proud carriage, expressive use of the arms, and rhythmic stamping of the feet.

The dance is often performed solo, and is based on signals of structural improvisation rather than choreographed.

Traditional flamenco is danced mainly in a proud and upright style. For women, the back is often held in a marked backbend.

There is little movement of the hips, the body is tightly held, and the arms are extended, like a ballet dancer.

In the twentieth century, flamenco danced informally at Roma celebrations in Spain was considered the most “authentic” form of flamenco.

The arms are noticeably different from classical flamenco, curving around the head and body rather than extending, often with a bent elbow.

“Dancing is the poetry of the feet.”
– John Dryden