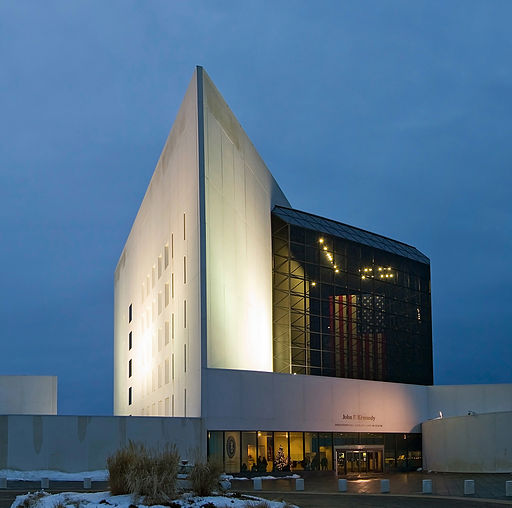 The library is the official repository for original papers and correspondence of the Kennedy Administration. In addition, the Library houses the published and unpublished materials, such as books and papers by and about Ernest Hemingway.

Following an offer by Harvard, President Kennedy had viewed several locations as a site for his future Presidential’s library and museum on or near Harvard grounds. Kennedy chose a plot of land next to the Harvard Graduate School of Business Administration.

The location faced the Charles River opposite the dormitories where Kennedy spent his upperclassman days.

Kennedy encouraged his administration to save the effects of both personal and official nature so that the institution would be:

“a complete record of a Presidential era.”

A month after Kenndy picked the location, President Kennedy was assassinated in 1963.

Shortly afterward, a committee was formed to advise Kennedy’s widow Jacqueline, who would make the final decision.

Following years of setbacks, by the early 1970s, construction had still not begun. Meanwhile, the Cambridge community was in fierce opposition to having the library built in Cambridge.

In  1975 the plans for the library to be located where President Kennedy selected were dropped.

The new location of the site was Columbia Point, near the University of Massachusetts Boston. The community was not opposed to the area being landscaped to house the library.

The final design was a simple geometric structure with a large glass pavilion. The concrete tower stands 125 feet (38 m) tall and houses offices and archives.

A circular section contains two theaters and is connected to the tower by a glass pavilion. Over 30 million people contributed to the cost of construction.

The official dedication was held in 1979 with the Kennedy family, friends, and President Jimmy Carter.

President Carter said of John F. Kennedy that he embodied:

“the ideals of a generation as few public figures have ever done.”

Senator Edward M. Kennedy, said of his brother’s life, that it:

“was a voyage of discovery, a quest for excellence that inspired universal trust and faith.
In that brief unfinished journey, he made us believe once more in the great historic purpose of this land.
He filled America with pride and made the nation young again.”

Highlights of the John F. Kennedy Presidential Library and Museum

The library is also home to a collection of documents and belongings from Ernest Hemingway. The collection was established in 1968 following an agreement between Hemingway’s widow Mary and Jacqueline Kennedy.

A room for the collection was dedicated in 1980 with a collection spanning Hemingway’s career.  It includes:

“The great enemy of the truth is very often not the lie, deliberate, contrived, and dishonest, but the myth, persistent, persuasive, and unrealistic.”
– John F. Kennedy