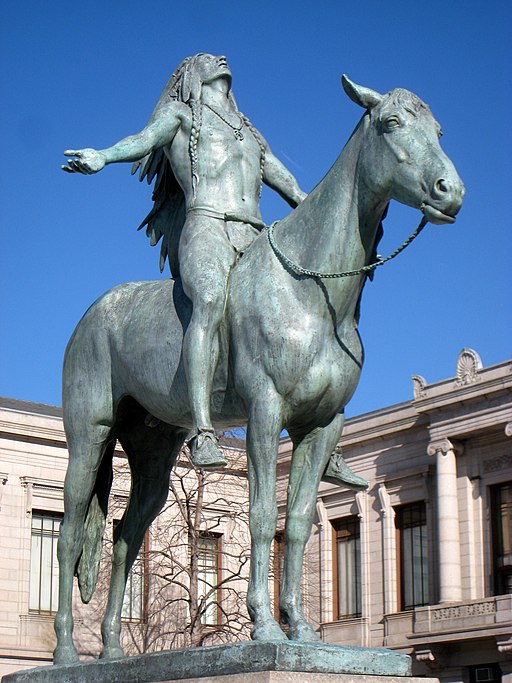 “Appeal to the Great Spirit” by Cyrus Edwin Dallin

“Appeal to the Great Spirit” by Cyrus Edwin Dallin is a 1909 equestrian statue that was the last in a four-piece series called the “Epic of the Indian.”

This version of the “Appeal to the Great Spirit” is installed outside the main entrance to the Boston Museum of Fine Arts. It was cast in Paris, in 1909, and won a gold medal for its exhibition in the Paris Salon.

The sculpture depicts an American Indian Chief, sitting on horseback with his arms outstretched, palms up and head back, looking to the sky. The Boston version has the light green tones that have developed on the equestrian sculpture over time.

Dallin has created a classical sculpture of the American Indian that has become an iconic representation of a mounted chief. His arms spread wide in a moment of individual communion with a higher power.

Dallin stated that in this work, he was attempting to capture the moment when the chief made his:

“final appeal to the Great Spirit for peace with the white man” after “his signal of peace…had been rejected.”

Dallin was a native of Utah, and during his youth, he frequently interacted with Native American children, giving him insights that he called upon while creating this and other works.

There is also a full-scale version of “Appeal to the Great Spirit” in Muncie, Indiana, a plaster example at the Cyrus Dallin Museum in Arlington, Massachusetts, and another is in the Rockwell Museum in Corning, New York.

An edition of nine 40-inch bronzes of the “Appeal to the Great Spirit” was produced about 1922, and examples of the 21-inch bronze statuette are at the White House, the U.S. Department of State, and many American museums.

Over 400 authorized small-scale bronze casts of Appeal to the Great Spirit has been produced, in three different sizes.

The image of this sculpture has appeared in popular culture as a logo on record covers and in several paintings.

Cyrus Edwin Dallin (1861 – 1944) was an American sculptor best known for his depictions of Native Americans.

He created more than 260 works, including the equestrian statue of Paul Revere in Boston, Massachusetts; the Angel Moroni atop Salt Lake Temple in Salt Lake City, Utah; and his most famous work, Appeal to the Great Spirit, at the Museum of Fine Arts, Boston. He was also an Olympic archer.

Appeal to the Great Spirit

“It is better to have less thunder in the mouth and more lightning in the hand.”
– Apache Proverb