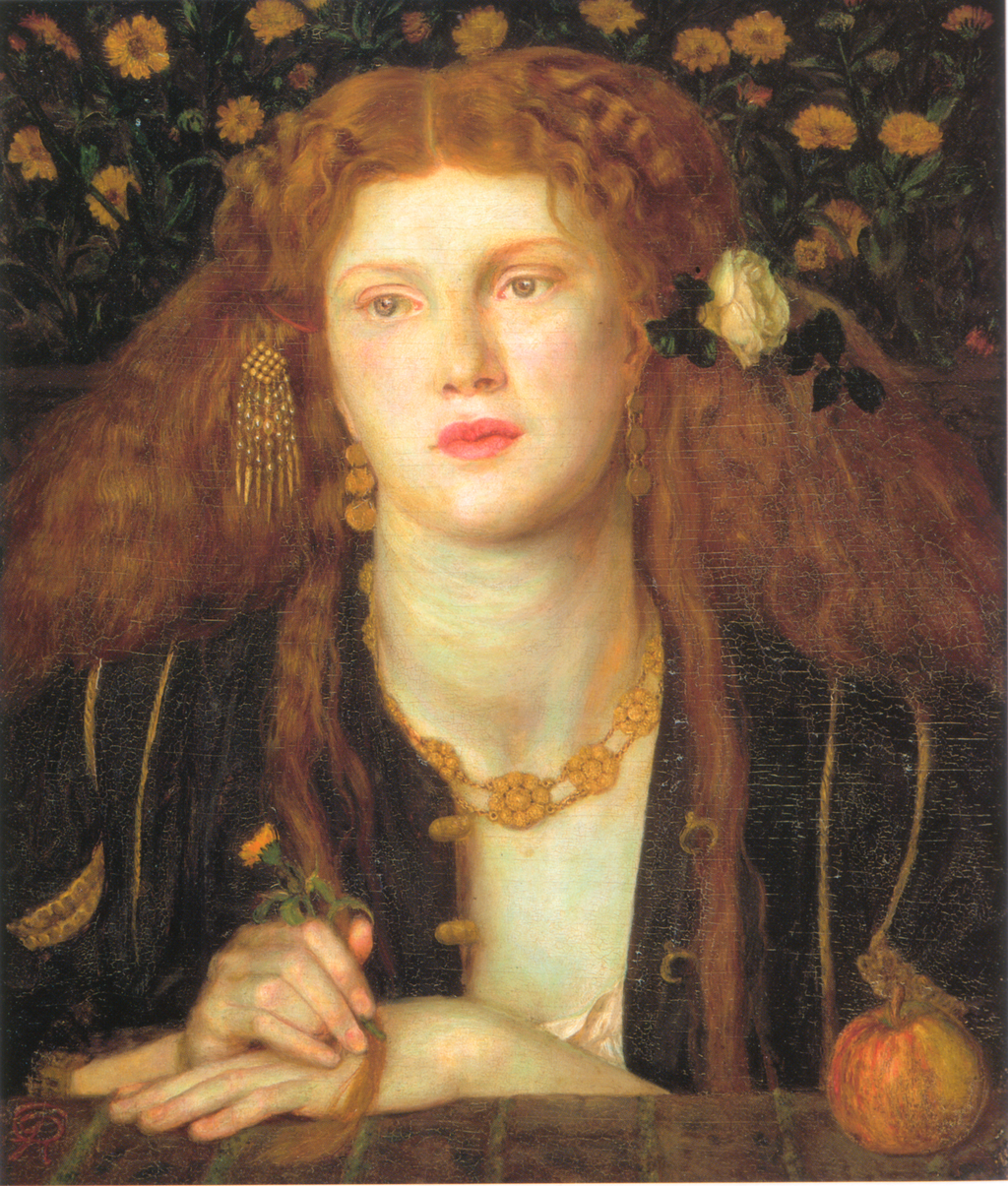 The title means “mouth that has been kissed.” The title refers to an Italian proverb, which Rossetti wrote on the back of the painting:

“‘The mouth that has been kissed does not lose its good fortune:
rather, it renews itself just as the moon does.”

The proverb comes from the conclusion of Alatiel’s story.

Rossetti was a translator of early Italian literature, and he knew the proverb from Boccaccio’s book called Decameron. The Decameron, also nicknamed “the Human Comedy,” is a collection of novellas by the 14th-century Italian Giovanni Boccaccio (1313–1375).

The Decameron contains 100 tales told by a group of ten young people in seclusion from the Black Death, which was afflicting the Florance.

In the story, Alatiel is the daughter of the sultan of Babylon. She was promised to the king of Algarve in return for his assistance with an invading army. The sultan sent Alatiel on a ship to meet her future husband.

Unfortunately, a storm sends the ship off course, and her crew abandons ship, leaving Alatiel and her ladies-in-waiting with no male protection. What follows are four years in Alatiel’s journey of survival and multiple lovers before she can return home.

Eventually, she returns to her father and tells him that she was shipwrecked and taken into a nunnery where she lied about who she was, fearing that she would be thrown out for not being a Christian. She claimed that she was there in seclusion until she found the opportunity to return home.

The sultan was pleased to have his daughter back and made arrangements to have her married to the king of Algarve. Alatiel convinces the king of her virginity, and they live happily ever after.

The painting, completed in 1859, represents a turning point in Rossetti’s artistic career. It depicts Fanny Cornforth, his main inspiration for sensuous figures.

This painting was the first of his pictures to focus on a single female figure. It established the style that was later to become a signature of his work.

The Paintings of Dante Gabriel Rossetti

“Have nothing in your house that you do not know to be useful or believe to be beautiful.”
– William Morris

“The more materialistic science becomes, the more angels shall I paint. Their wings are my protest in favor of the immortality of the soul.”
– Edward Burne-Jones

“I love art, and I love history, but it is living art and living history that I love.”
– William Morris

“Love, which is quickly kindled in the gentle heart, seized this man for the fair form that was taken from me, the manner still hurts me. Love which absolves no beloved one from loving, seized me so strongly with his charm that, as thou sees, it does not leave me yet.”
– Dante Gabriel Rossetti

“The term ‘Pre-Raphaelite’ is in danger of becoming one of the most misused tags in art history.”
– Christopher Wood