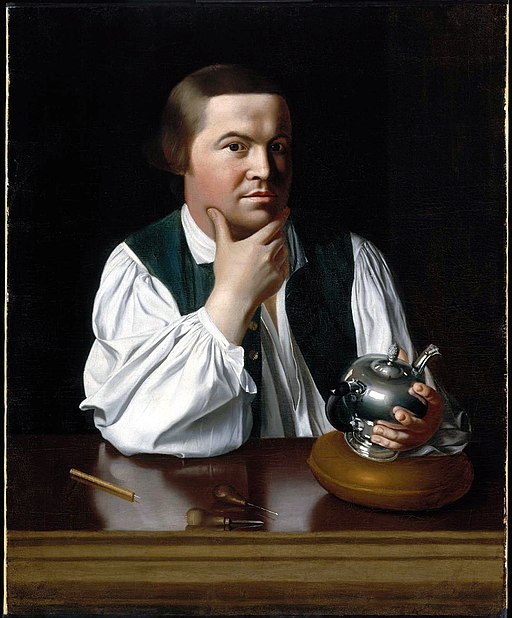 The finished pot remains undecorated, and the engraving tools rest at Revere’s elbow, pointing to the work yet to be completed. Is he contemplating the engraved design?

Copley painted this portrait of Paul Revere when he was 33 years old. He was a successful silversmith who owned a silver shop in his name in Boston.

Paul Revere was a master in engraving and metal tableware of cookware or crockery, such as pots, kettles, and jugs. His holloware was made for durability.

This portrait was made seven years before his famous midnight ride to alert the colonial militia in 1775 to the approach of British forces before the battles of Lexington and Concord.

A voice in the darkness, a knock at the door,
And a word that shall echo forevermore!
For, borne on the night-wind of the Past,
Through all our history, to the last,

In the hour of darkness and peril and need,
The people will waken and listen to hear
The hurrying hoof-beats of that steed,
And the midnight message of Paul Revere.”

Paul Revere (1734 – 1818) was an American silversmith, engraver, and Patriot in the American Revolution.

Revere was a prosperous and prominent Boston silversmith. He had helped organize an intelligence and alarm system to keep watch on the British military.

Revere later served as a Massachusetts militia officer. Following the war, Revere returned to his silversmith trade. He used the profits from his expanding business to finance his work in iron casting, bronze bell and cannon casting, and the forging of copper bolts and spikes.

In 1800, he became the first American to successfully roll copper into sheets for use as sheathing on naval vessels.

“Paul Revere’s Ride” (1860) is a poem by the poet Henry Wadsworth Longfellow that commemorates the actions of Paul Revere on April 18, 1775.

The poem is spoken by the landlord of the Wayside Inn and tells a partly fictionalized story of Paul Revere.

In the poem, Revere tells a friend to prepare signal lanterns in the Old North Church in Boston to inform him when the British will attack by land or sea.

Soon, two signal lanterns, informed Revere that the British are coming by sea. Revere then rode his horse through Medford, Lexington, and Concord to warn the patriots.

“Listen, my children, and you shall hear
Of the midnight ride of Paul Revere,
On the eighteenth of April, in Seventy-five;
Hardly a man is now alive
Who remembers that famous day and year.

He said to his friend, ‘If the British march
By land or sea from the town to-night,
Hang a lantern aloft in the belfry arch
Of the North Church tower as a signal light,—

One, if by land, and two, if by sea;
And I on the opposite shore will be,
Ready to ride and spread the alarm
Through every Middlesex village and farm,
For the country folk to be up and to arm.”

“In the hour of darkness and peril and need,
The people will waken and listen to hear
The hurrying hoof-beats of that steed,
And the midnight message of Paul Revere.”
– Henry Wadsworth Longfellow, Paul Revere’s Ride