Relief of a Winged Genie

This Relief of a Winged Genie on gypsum depicts a recurring motif in the iconography of Assyrian sculpture. Winged genies are usually bearded male figures with birds’ wings.

The genie wears the horned crown of a deity and the elegant jewelry and fringed cloak of an Assyrian royal. This well-preserved example comes from the Northwest Palace of King Ashurnasirpal II in Nimrud.

Nimrud was an ancient Assyrian city located 30 kilometers (20 mi) south of the city of Mosul in northern Iraq. 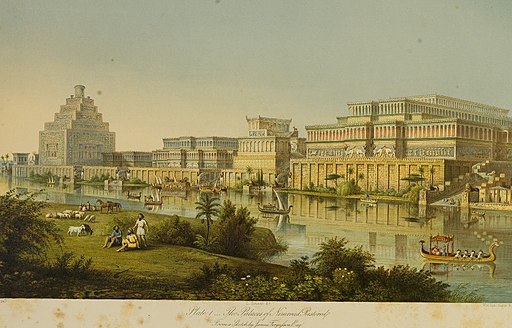 “The Palaces of Nimrud Restored,” as imagined by the city’s first excavator, A.H. Layard in  1853

These genii are beings known as antediluvian (belonging to the time before the great flood) sages. They were beings that existed during a godlike generation of humanity.

During the antediluvian age, humankind was covered by the great flood, and the inhabitants were purified and roamed the earth as invisible genii.

Many examples of “Winged Genie” from the Nimrud palace have made their way across the world to many museums, including:

Across the center, of this panel is inscribed the “Standard Inscription” of King Ashurnasirpal II, who reigned between 883–859 BCE as king of Assyria, which in part reads as:

“Palace of Assurnasirpal, priest of Assur, the favorite of Bel and Ninurta,
the beloved of Anu and Dagan, the Strong one of the great gods, 777the mighty king, king of the world, king of Assyria ……
the valiant hero, who goes hither and yon, trusting in Assur, 77his lord and who is without rival among the princes of the four quarters;
the shepherd of the fertile pastures, who fears no opposition; 77the mighty flood, who has no opponent;
the king who subjects the unruly, the entire hosts of the nations’ subjects; 77the strong man who treads on the necks of his foes,
who crushes all his enemies, who shatters the alliance of the rebels;
the king, who with the help of the great gods,
his lords, proceeds and whose hand has conquered all lands;
who has mastered all the mountain regions and has received their tribute,
who takes hostages and establishes his power over all the lands.”
–  “Standard Inscription” of King Ashurnasirpal II

The Motif of Hybrid Beasts

Winged Genii co-existed with numerous other mythological hybrid Beasts in the Ancient Age art of Assyria and Asia Minor.

These depictions influenced Archaic Greece during its contact and influence from the east, resulting in the hybrid creatures of Greek mythology such as the Chimera, the Griffin, Pegasus, and winged humans.

This orientalizing period for Greece has its origins in Early Iron Age (9th century BC) Crete, where bearded and winged figures inspired by Assyrian examples are found engraved in bronze bowls and other artifacts.

The “winged man” also makes an appearance in Ezekiel’s vision in the Old Testament, and via Revelation 4:7 becomes the symbol of Matthew the Evangelist.

Hybrid beasts composed of parts from different animals, appear in a variety of cultures as legendary or religious creatures or beings.

Relief of a Winged Genie

‘Designed to Impress and Overwhelm’ | A 3,000-year-old Assyrian Relief

Assyrian Relief from the Palace of Ashurnasirpal II

“If you are a host to your guest, be a host to his dog also.”
– Assyrian Proverb