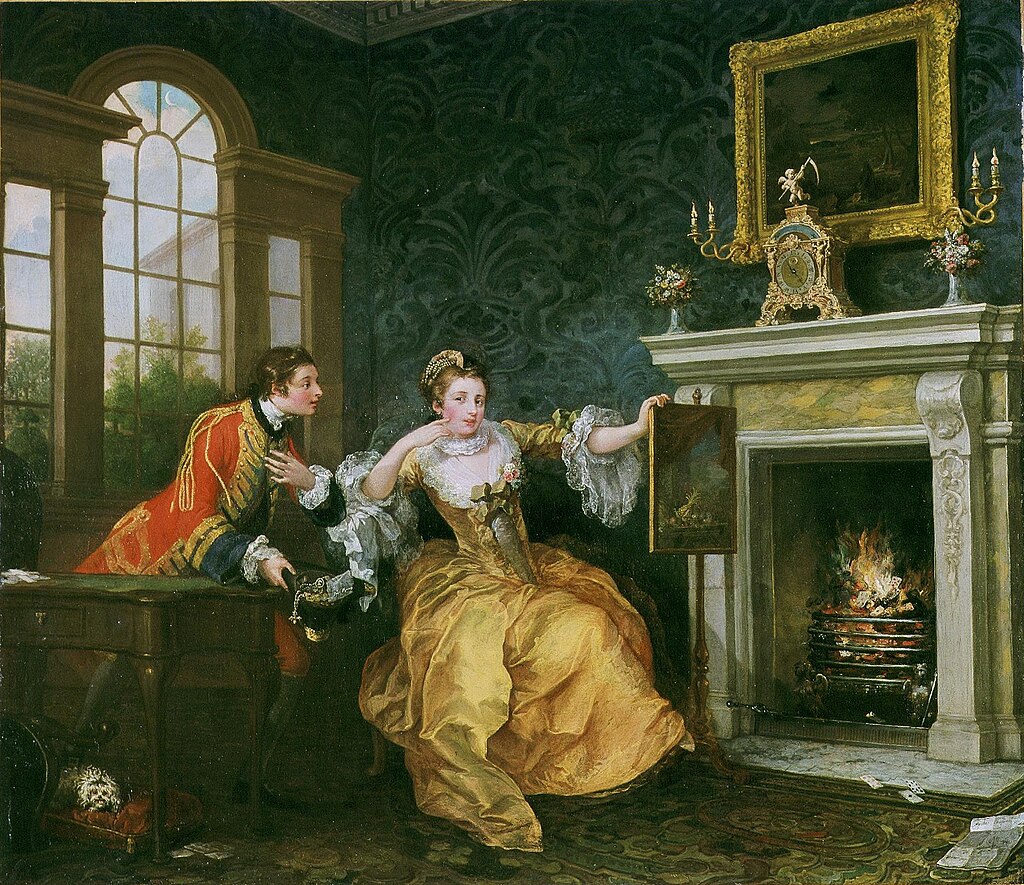 “The Lady’s Last Stake” by William Hogarth depicts the moment when the woman has to make a fateful decision, to be ruined financially, or morally. The painting shows a man and a woman who have been gambling.

They were playing piquet at a table near an open fire in an elegant room. The woman has just lost her jewels and money to the man, an army officer.

He offers to play one more game of cards, and if she wins, he will return her fortune in his hat; but if she loses, she must accept him as her lover.

The woman holds the edge of the fire screen as she considers her options. On the floor is a discarded letter from her husband sending her money; it is addressed to Charlotte and signed Townly.

The painting is full of symbolism, alluding to the woman’s fateful decision. The symbolism includes:

Originally this painting was titled “Piquet: or Virtue in Danger.” It then became known as “The Lady’s Last Stake” after the title of a comedy play, in which Lady Gentle loses money to the cheating Lord George Brilliant.

In the theater play, the lady must decide whether to pay her debts or settle them by compromising her fidelity to her husband.

William Hogarth became famous for his Moralizing Art, which became highly popular as engraved copies. Hogarth lived in an age when artwork became increasingly commercialized, being viewed in shop windows, taverns, and public buildings, and sold in printshops.

Hogarth capitalized on these trends by painting and engraving modern moral subjects and to treat his compositions as a dramatic writer. Hogarth remarked in his notes:

“My picture was my stage.”

Hogarth drew inspiration from the moralizing Protestant tradition of Dutch genre painting, the satirical traditions of the English broadsheet, and other types of popular print and theatre. In England, the fine arts had little comedy in them before Hogarth.

His prints were expensive and remained so until the early 19th-century when cheaper reprints brought them to a broader audience.

Piquet is an early 16th-century trick-taking card game for two players that is still played today. Until the early twentieth century, Piquet was the most popular card game in France, occupying a similar position to cribbage in England.

Following the marriage of King Charles I of England to Henrietta Maria of France in 1625, the British adopted the French name for the game. It went in and out of fashion among the upper classes in Britain between the 17th and early 20th centuries.

In his youth, his father underwent periods of mixed fortune and was at one time imprisoned due to outstanding debts. Hogarth’s works are mostly satirical caricatures, and they became widely popular and mass-produced via prints in his lifetime.

He was by far the most significant English artist of his generation.

The Art of William Hogarth

“Each player must accept the cards life deals him or her: but once they are in hand, he or she alone must decide how to play the cards in order to win the game.”
– Voltaire