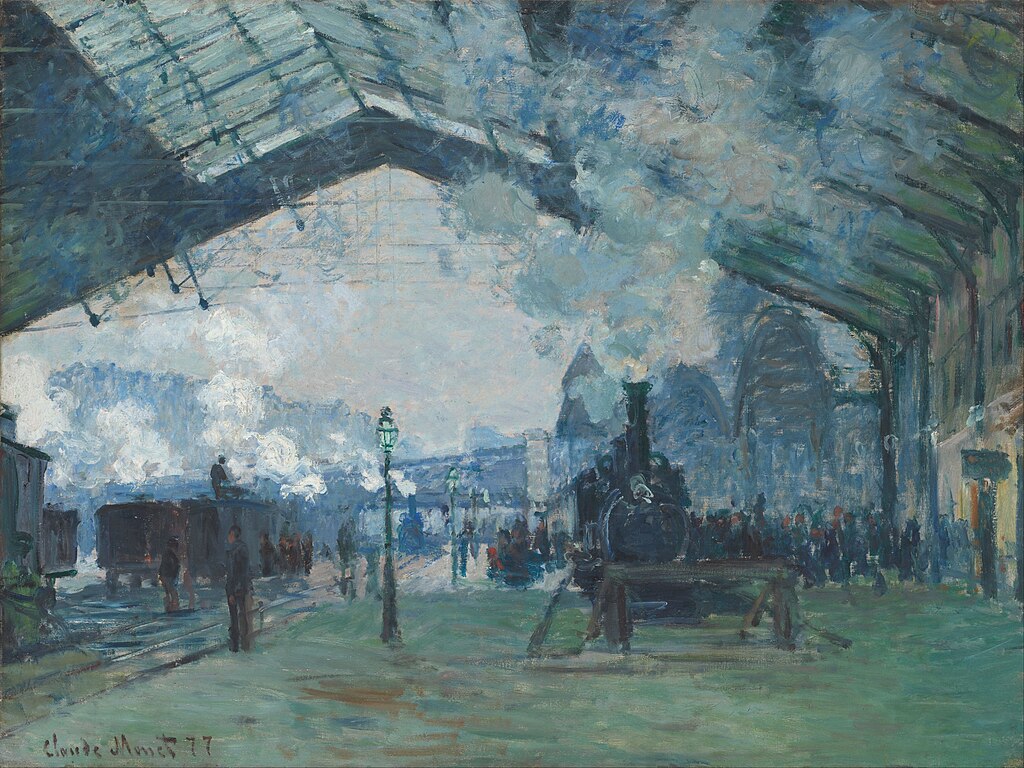 “Arrival of the Normandy Train, Gare Saint-Lazare” by Claude Monet is one of four surviving Monet paintings representing the interior of the Saint-Lazare train station.

Monet depicted the Gare St-Lazare as an interior landscape, with smoke from the engines creating the same effect as clouds in the sky.

After several years of painting in the countryside in Argenteuil, he turned to urban landscapes in Paris. Monet was diversifying his portfolio and competing with other painters of modern life.

In this painting, Monet successfully captured the effects of light, movement, and clouds of steam in a modern urban setting.

Arrival of the Normandy Train, Gare Saint-Lazare by Claude Monet

“The Gare St-Lazare” by Claude Monet shows how he used swift brushstrokes to create the gleaming engines to the right and the passengers as if dark shadows on the platform.

Monet had rented a small flat and a studio near the Gare St-Lazare, in 1877 where he created a series of paintings at St-Lazare Train Station.

He explored smoke and steam and the way that they affected color and visibility. Monet investigated the effects of smoke and steam that were sometimes opaque and sometimes translucent in a modern urban Parisian milieu.

Monet created the habit of repeatedly painted the same subject in different lighting conditions, at different times in the day, and through the various changes of weather and season. Monet began this process in the 1880s and continued until the end of his life in 1926. 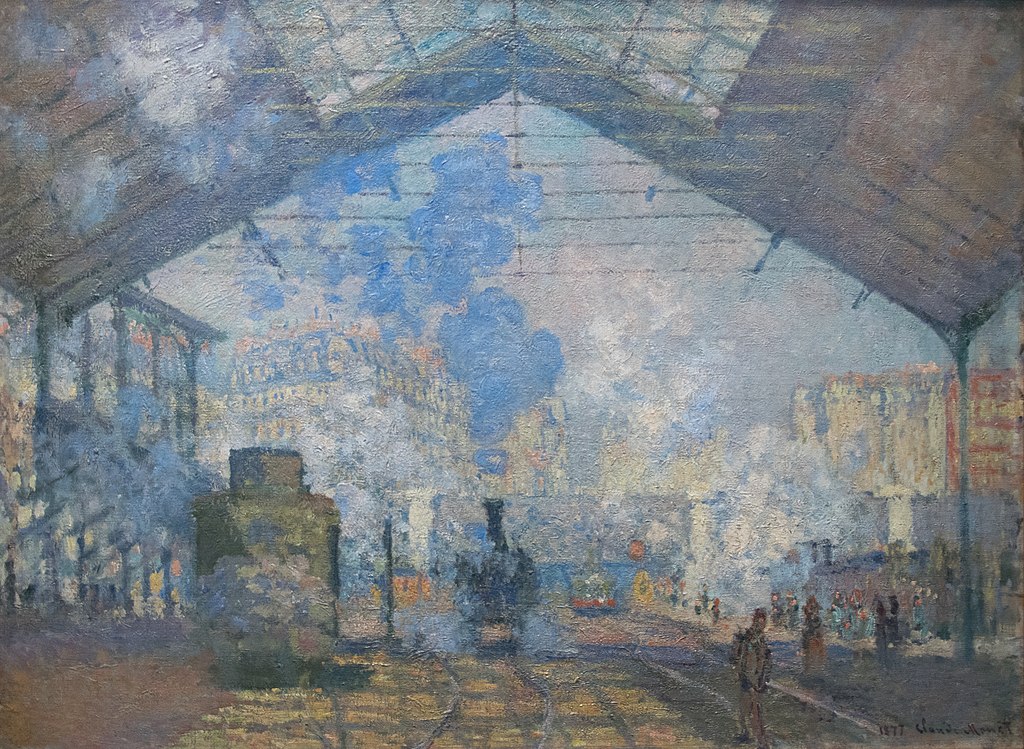 “La Gare Saint-Lazare” by Claude Monet is an Impressionist painting that captures the smoky interior of this Paris railway station. The “Gare Saint-Lazare” Series captured the varied atmospheric conditions and from various points of view.

The works were, in part, a response to the criticism of his painting Impression, Sunrise, which was exhibited at the First Impressionist Exhibition in 1874.

The series was also a popular topic of technical progress with the modern steam train, and the newly extended iron and glass train shed at the station.

“The Gare Saint-Lazare: Arrival of a Train” by Claude Monet 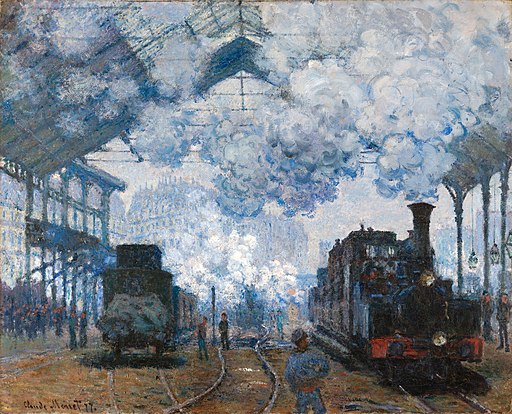 “The Gare Saint-Lazare: Arrival of a Train” by Claude Monet

“The Gare Saint-Lazare: Arrival of a Train” by Claude Monet is the largest in Monet’s series of the Saint-Lazare train station in Paris.

While completing the series, Monet worked on all the paintings at the same time, and sometimes he leaned the canvases against each other while the paint was still wet.

This practice caused the cork on the backs of the canvases to be pressed into the paintings behind. The circular indentations in the top two edge of this work’s surface.

Monet’s thick build-up of pigments in this painting is an example of his style in juxtaposing hues in mounds of impasto that would blend when viewed from a distance. This technique led Cézanne to declare:

The Gare Saint-Lazare: Arrival of a Train

The Gare Saint-Lazare (St Lazarus Station) is one of the six large terminus railway stations in Paris. It serves train services toward Normandy and northwest of Paris. Saint-Lazare is the second busiest station in Paris, after the Gare du Nord.

The first station at St Lazare was opened in 1837, and the first line served was the single-track line to Le Pecq. In 1843 St-Lazare was the terminus for three lines; by 1900, this number had tripled.

The station had 14 platforms in 1854 after several enlargements, and now has 27 platforms sorted in six destination groups.

The Gare Saint-Lazare has been represented in several artworks. It attracted artists during the Impressionist period, and many of them lived very close to the Gare St-Lazare during the 1870s and 1880s.

Claude Monet’s depictions of this train station were far different than Monet’s previous paintings of harbors, boats, and oceans.

The Gare Saint-Lazare series of paintings lead the viewers through a tour of the train station at different points of the day. Émile Zola sated:

“Monet is able to turn a normally dirty and gritty place into a peaceful and beautiful scene…You can hear the trains rumbling in, see the smoke billow up under the huge roofs…that is where painting is today…our artists have to find the poetry in a train station, the way their fathers found the poetry in forests and rivers”.

From 1883 Monet moved to Giverny, a small village on the Seine River about forty miles west of Paris. He bought a home in Giverny, where he developed a garden landscape that included the lily ponds that would become the subjects of his best-known works.

Claude Monet, the Gare Saint-Lazare, and the Painting of Modern Life

“Monet is able to turn a normally dirty and gritty place into a peaceful and beautiful scene.”
– Émile Zola