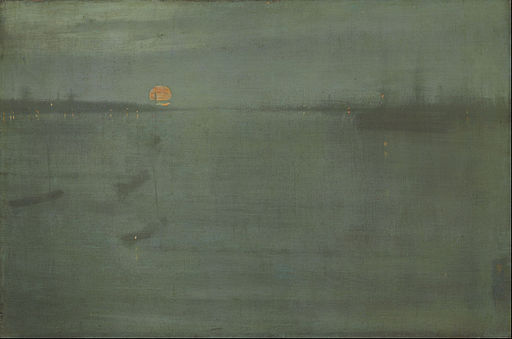 Nocturne: Blue and Gold – Southampton Water by James Abbott McNeill Whistler was an early 1870s step for the artist toward abstraction with his Nocturnes series.

Whistler captures the stillness of evening while evoking the artistry of music in the tonal harmonies of twilight.

Whistler has depicted an inlet along the English Channel near Southampton obscured by the approaching night.

Vessels appear ghostly shapes, and shadowy forms by the twilight as the fragmented moon is seen on the horizon.

The work provides an example of Japonisme style, which significantly influenced Whistler and many other Impressionists during this period.

Whistler and the Thames

“I am not arguing with you – I am telling you.”
– James Abbott McNeill Whistler