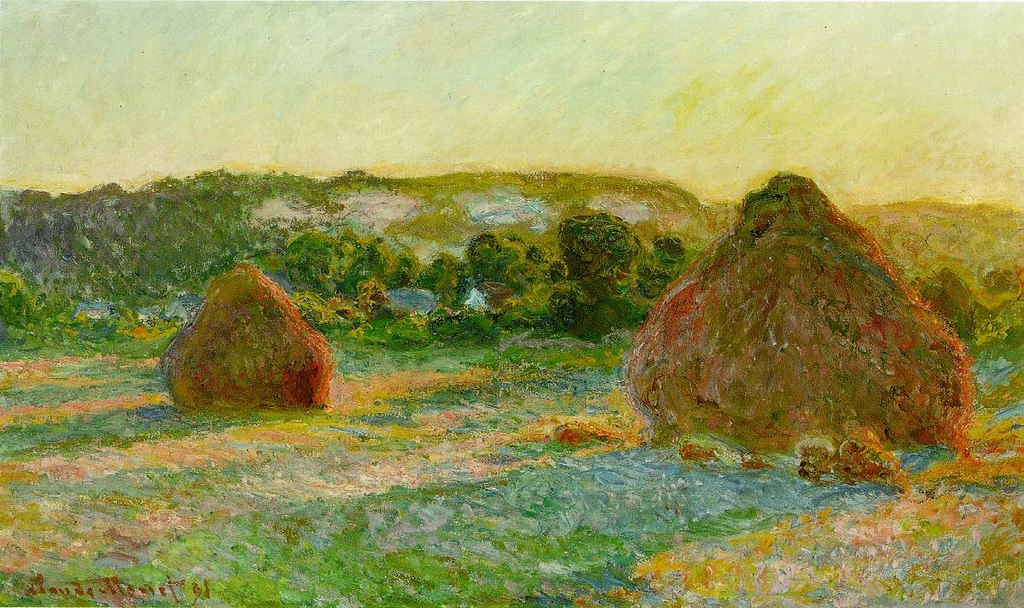 Stacks of Wheat (End of Summer)

Stacks of Wheat (End of Summer) by Claude Monet is part of a series of stacks of harvested wheat. The impressionist Haystack series is famous for how Monet repeated the same theme to show the different light and atmosphere at different times of day, across the seasons and in many types of weather. Monet’s Haystacks is one of his earliest to rely on repetition of a subject to illustrate a subtle difference in color perception across variations of times of day, seasons, and weather. The series consists of twenty-five canvas which Monet began near the end of the summer of 1890.

The stacks belonged to Monet’s neighbor, and Monet noticed from his farm the way the light changed on the stacks. Monet started with two canvases, a sunny and an overcast version. But Monet soon found he could not catch the ever-changing light and mood on just two paintings. Thus Monet’s daily routine involved carting paints, easels, and many unfinished canvases back and forth. He worked on whichever canvas most closely resembled the scene of the moment as the conditions and light fluctuated. Monet began painting the stacks en plein air but later revised his initial impressions in his studio. He used this method to both generate contrast and to preserve the harmony within the series.

Monet became increasingly fascinated by the seasonal effects and the color harmonies. Monet’s subject matter was carefully chosen and was the product of thought and analysis. Monet undertook to capture the Haystacks in direct sunlight and then to explore in his art the same viewpoint in the various light and atmospheric conditions. For Monet, the concept of producing and exhibiting a series of paintings related by subject and vantage point began in 1889, and his interest in the serial motif continued for the rest of his career.

Monet settled in Giverny in 1883 and most of his paintings from then until his death 40 years later were of scenes within 3 kilometers (2 mi) of his home. Monet was intensely aware of and fascinated by the visual nuances of the region’s landscape and by the endless variations in the days and the seasons. Monet’s painted various subjects in series under different lights and seasons focused on depictions of atmospheric influences.

Oscar-Claude Monet was a founder of French Impressionist painting, and the term “Impressionism” is derived from the title of his painting Impression, “soleil levant” or “Impression, Sunrise,” which was exhibited in 1874. Monet adopted a method of painting in which he painted the same scene many times to capture the changing of light and the passing of the seasons. Monet is known for having produced a series of paintings all versions of the same subject and perspective. Examples include his series of the “Valley of the Creuse” series and his famous series of “Haystacks” and “Water Lilies” paintings.

From 1883 Monet lived in Giverny, where at his home, he developed a garden landscape which included the lily ponds that would become the subjects of his best-known works. In 1899 he began painting the water lilies, first with a Japanese bridge as a central feature, and later in the series of large-scale paintings, with the water lilies as the main feature. This series occupied him for the last 20 years of his life.

Stacks of Wheat (End of Summer)

Explore the Art Institute of Chicago

“My wish is to stay always like this, living quietly in a corner of nature.”

“No one is an artist unless he carries his picture in his head before painting it, and is sure of his method and composition.”

“No one is an artist unless he carries his picture in his head before painting it, and is sure of his method and composition.”

“I perhaps owe having become a painter to flowers.”

“It’s on the strength of observation and reflection that one finds a way. So we must dig and delve unceasingly. ”

“It took me time to understand my waterlilies. I had planted them for the pleasure of it; I grew them without ever thinking of painting them. ”

“The richness I achieve comes from Nature, the source of my inspiration.”

“Everything I have earned has gone into these gardens. ”

“Colors pursue me like a constant worry. They even worry me in my sleep. ”

“One can do something if one can see and understand it…”

“I despise the opinion of the press and the so-called critics. ”

“I am very depressed and deeply disgusted with painting. It is really continual torture. ”

“I will do water – beautiful blue water.”

“I’m never finished with my paintings; the further I get, the more I seek the impossible and the more powerless I feel. ”

The noblest pleasure is the joy of understanding. ”

“My work is always better when I am alone and follow my own impressions.”
– Claude Monet