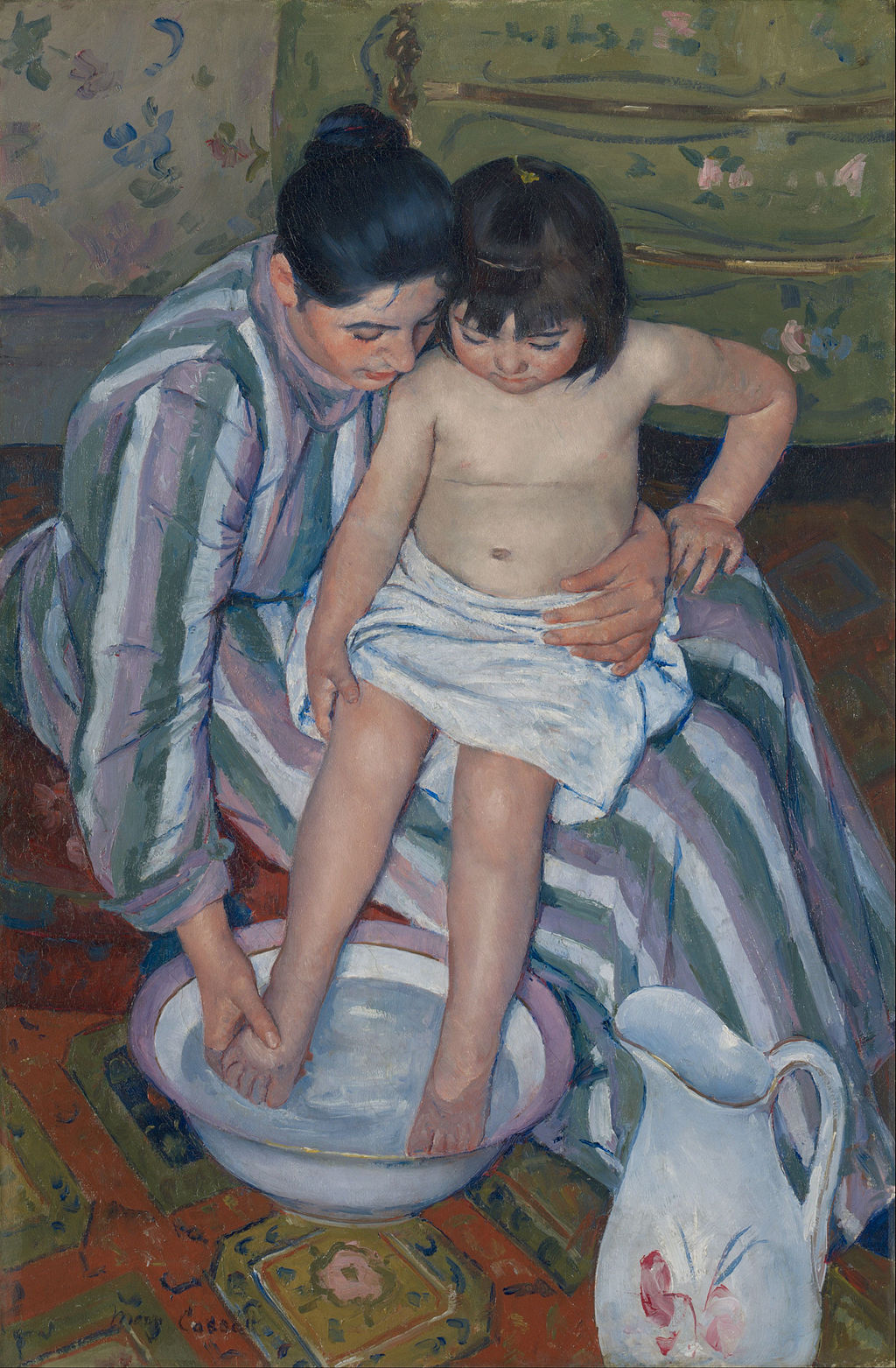 “The Child’s Bath” by Mary Cassatt

“The Child’s Bath” by Mary Cassatt was inspired by Japanese woodblocks and depicted a mother or female carer bathing of a child. The female figure holds up the child firmly and protectively while washing the child’s feet.

The left arm of the child braces against the mother’s thigh, while the other hand is holding on the child’s leg. The painting reflects the dignity of motherhood.

Cassatt was heavily influenced by her fellow Impressionist peers, especially Edgar Degas. In 1890, she was struck by the prints of the Japanese woodcuts.

Cassatt was drawn to the simplicity and clarity of the Japanese design, and the skillful use of blocks of color. Japanese prints and Degas inspired the perspective in this painting.

She became an outspoken advocate for women’s equality, campaigning with her friends for equal travel scholarships for students in the 1860s, and the right to vote in the 1910s.

The Child’s Bath or The Bath

Quotes and Proverbs about Mothers

“God could not be everywhere, and therefore he made mothers.”
– Jewish Proverb

“There is only one pretty child in the world, and every mother has it.”
– Chinese Proverb

“He that would the daughter win must with the mother first begin.”
– English Proverbs

“Who takes the child by the hand takes the mother by the heart.”
– German Proverb

“Mother is a verb, not a noun.”
– Modern Saying

“What the daughter does, the mother did.”
– Jewish Proverb

“An ounce of mother is worth a pound of clergy.”
– Spanish Proverb

“Mother is the name of God in the lips and hearts of children.”
– William Makepeace Thackeray

“What the child says, it has heard at home.”
– African Proverb

“One generation plants the trees; another gets the shade.”
– Chinese Proverb

“A mother’s happiness is like a beacon, lighting up the future but reflected also on the past in the guise of fond memories.”
– Honore de Balzac

“My mother had a great deal of trouble with me, but I think she enjoyed it.”
– Mark Twain

“All that I am or hope to be, I owe to my angel mother.”
– Abraham Lincoln

Mary Cassatt: A collection including Children

“There are two ways for a painter: the broad and easy one or the narrow and hard one.”
– Mary Cassatt