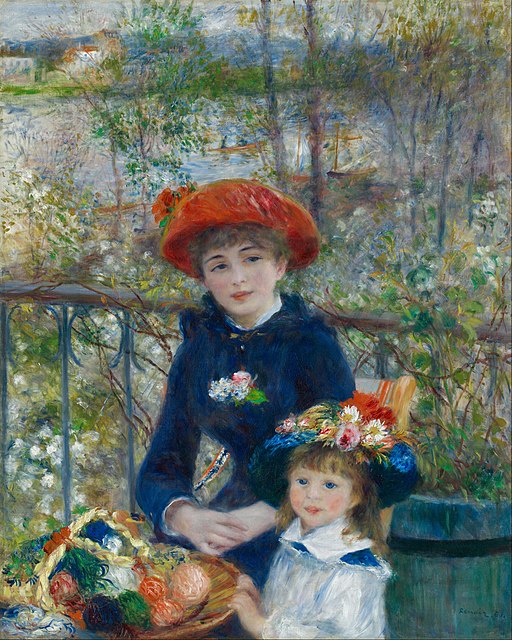 “Two Sisters” by Pierre-Auguste Renoir depicts the upper terrace of the Maison Fournaise, a family restaurant located on an island in the Seine in Chatou, the western suburb of Paris.

The painting shows a young woman and her younger girl seated outdoors with a small basket containing balls of wool. In the background over the railings of the terrace, are flowering plants and vines.

Beyond is the River Seine with its boats and also some buildings in the top left. Renoir painted this delightful scene as a homage to springtime in 188. He or his art dealer called it “Two Sisters.”

The first owner of the painting used its alternative title, “On the Terrace.” Jeanne Darlot (1863—1914), a future actress who was 18 years old when she posed for the elder sister.

The identity of who represented the younger sister is not known as they were not real sisters. Before working on Two Sisters, Renoir worked in this particular location on another well-known painting, Luncheon of the Boating Party.

The Maison Fournaise is today a restaurant and museum located on Impressionist Island on the Seine in Chatou, west of Paris.

In 1857, Alphonse Fournaise bought land in Chatou to open a boat rental, restaurant, and small hotel for the new tourist trade.

The family restaurant was a favorite of Pierre-Auguste Renoir. He painted many scenes at the restaurant as well as several portraits of Fournaise family members and many landscapes of the surrounding area.

“My painting detains me in Chatou. Be kind enough to come and have lunch with me.
You won’t regret your trip; this is the loveliest place in the surroundings of Paris.”

The Maison Fournaise museum’s collection is focused on the history of the house and the golden age of the banks of the Seine. I

At the age of 51, Renoir developed rheumatoid arthritis, which in his last twenty years of his life, severely limited his mobility.

Renoir remained positive and passionate about his art and did not let his condition affect his painting or diminish the beauty that he saw around him.

In the advanced stages of his arthritis, he required an assistant to place his paintbrush in his hand. His hands were also wrapped with bandages to prevent skin irritation.

Renoir applied a variety of effective coping strategies and used his ingenuity to come up with different ways to continue painting even as his arthritis weakened him.

Renoir was a prolific artist who created several thousand paintings. The single most extensive collection of his works, about 181 paintings, is part of the Barnes Foundation in Philadelphia.

Two Sisters or On the Terrace

Two Sisters (On the Terrace) by Pierre Auguste Renoir

A Tour of Chicago’s Museums