This Neolithic Chinese Painted Pottery was found in the graves of New Stone Age people who lived in northwest China over 3,500 years ago.

The subtle shapes, smoothed surfaces, red, and black paint are typical of the Pan-Shan Pottery. The Pan-Shan culture (2500 – 2000BC) of Neolithic China had this distinctively painted pottery.

Pottery is one of the oldest human inventions, originating before the Neolithic period, with ceramic objects like the pottery vessels that were discovered in China, which date back to 18,000 BC.

Chronologies based on pottery are essential for dating non-literate cultures and are often of help in the dating of historical cultures. A test can be used to provide an estimate of the date of the last firing.

Examining fired pottery shards from prehistory, scientists learned that during high-temperature firing, iron materials in clay record the exact state of Earth’s magnetic field could also be determined at that exact moment. 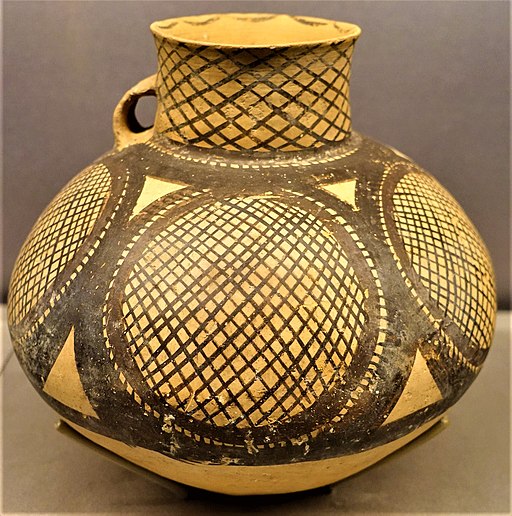 The earliest history of pottery is prehistoric, pre-literate cultures; therefore, its history can only be found among the artifacts of archaeology.

Because pottery is so durable, pottery and shards of pottery survive from millennia at archaeological sites. They are typically the most common and important type of artifact to endure.

Many prehistoric cultures are named after their pottery, as that is the easiest way to identify their sites. Archaeologists have developed the ability to recognize different cultures from small shards.

The Neolithic Age in China can be traced back to about 10,000 BC. Excavation of a Peiligang culture site in Henan found a community that flourished in 5,500 to 4,900 BC, with evidence of agriculture, constructed buildings, pottery, and burial of the dead.

With agriculture came increased population, the ability to store and redistribute crops, and the potential to support specialist artisans and administrators.

This pottery was found in graves. These finds provide archaeologists with clues to life in Neolithic societies, but they must interpret the evidence carefully.

The designs on these pots may have symbolic significance, or they may be decorative, or both. Likewise, the loop handles on some of these pots seem too delicate to be used as handles.

So the handles may have been just decorative or made individually as burial goods.

For people settled in villages, life in large groups brought new challenges, compared to the small groups of the hunter-gatherers.

Settled communities had to coordinate and distribute labor and food. These pots were essential for storing grain.

Before pottery became part of a prehistoric culture, several advances had to be made. First, there must be usable clay available.

China has large deposits of a variety of clays, which gave them an advantage in the early development of fine pottery. Second, the heating of pottery to temperatures that could transform the raw clay into a ceramic.

Methods to reliably create fires hot enough to fire pottery did not develop until late in the development of cultures.

Third, the potter must have time available to prepare, shape, and fire the clay into pottery. Even after control of fire was achieved, humans did not seem to develop pottery until a sedentary life was made.

It has been hypothesized that pottery was produced only after humans established agriculture, which led to permanent settlements.

Fourth, there must be a sufficient need for pottery to justify the resources required for its production.

The Majiayao period in China lasted from roughly 3400–2000 BC, and during this period, burial practices changed. Early in the period, graves had a few goods, and some had many, but there was little difference in wealth.

In later periods, some tombs included passageways with burial chambers that contained significantly more extensive collections of grave goods than most of the other graves. This is evidence that an increasing difference in status and an emerging inequality in society.

Early pottery involved hand-shaping, which the earliest method used to form vessels. This included a combination of pinching and coiling. The earliest process for firing pottery wares was the use of bonfires pit fired pottery.

Early potters used whatever clay was available to them in their local vicinity. Early bonfire-fired pottery was made with rounded bottoms to avoid sharp angles that might be susceptible to cracking.

The potter’s wheel was invented in Mesopotamia sometime between 6,000 and 4,000 BC and revolutionized pottery production.

Chinese Ceramics: From the Neolithic to the Qing Dynasty

A vessel is formed from a lump of clay with care. However, it is the empty space within the vessel that makes it useful.
– Laozi

Clay is used to make vases, but it is the emptiness they contain that makes them useful.
– Laozi

A clay pot sitting in the sun will always be a clay pot. It has to go through the white heat of the furnace to become porcelain.
– Anonymous

Every pot that is crafted required hands to be spoilt.
– Coral Jain

The very “marks” on the bottom of a piece of rare crockery are able to throw me into a gibbering ecstasy.
– Mark Twain

I do pottery. I love it. It’s very relaxing; it takes me to another planet.
– Eva Herzigova

In Old Europe and Ancient Crete, women were respected for their roles in the discovery of agriculture and for inventing the arts of weaving and pottery making.
– Carol P. Christ

I have always striven to fix beauty in wood, stone, glass, or pottery, in oil or watercolor by using whatever seemed fittest for the expression of beauty that has been my creed.
– Louis Comfort Tiffany

“The best time to plant a tree was 20 years ago. The second best time is today.”
– Chinese Proverb