Stone has been used to make a variety of different tools and weapons throughout history, including arrowheads, spear points, hand axes, and querns to grind cereals into flour.

Hand axes were the first tools to be recognized as prehistoric. The first published representation of a hand ax was drawn for a British publication in 1800. Until that time, their origins were thought to be supernatural.

They were called thunderstones because tradition held that they had fallen from the sky during storms or were formed inside the earth by a lightning strike and then appeared at the surface.

They were used in some rural areas as an amulet to protect against storms.

The oldest known stone tools were found in Ethiopia and dated to about 2.6 Million Years Ago (mya).

The early examples of hand axes date back to 1.6 mya, and by 1.8 mya, early man was present in Europe with stone tools. 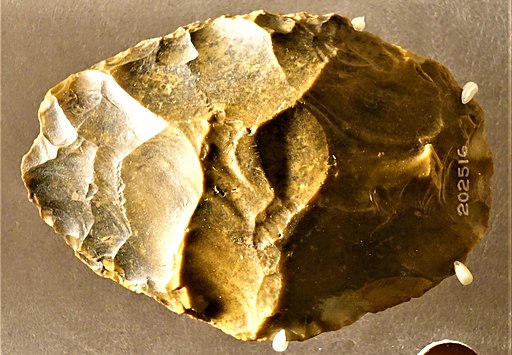 A hand ax was the longest-used tool in human history. Chipped stone tools are made from materials such as flint, obsidian, basalt, and quartzite via a process known as lithic reduction.

One simple form of reduction is to strike stone flakes from a core of material using a hammerstone.

For a Hand Axe, the core is reduced to a rough bifacial form, which is then further reduced using soft hammer flaking techniques or by pressure flaking the edges.

A hand ax has used in the Early and Middle Paleolithic Stone Age. It had similar sharp edges on both sides and was held in the hand, not with a handle like a modern ax.

It was held directly in the hand, perhaps wrapped in a piece of leather. Hand axes were used for at least one and a half million years.

Homo erectus and Neanderthal Man made them, and it was one of their most essential tools. Handaxe tools were used to kill and butcher animals, to dig, to chop wood, and to remove tree bark. 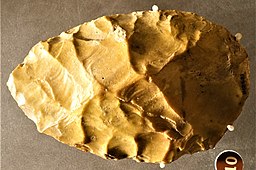 Hand axes were the multi-purpose food collection tool. Their cutting edges were used for butchering meat and general hacking through bone, muscle, and tendons.

The hand ax was perfect for getting at the bone marrow, which is high in protein and vitamins and thus was highly prized as a food source.

Neanderthals were hunters of large mammals such as mammoths, and that may be true of other hand ax cultures.

Wielding a hand ax requires considerable strength, but Neanderthals were stronger than us in their upper bodies.

Older hand axes were produced by direct percussion with a stone hammer and can be distinguished by their thickness and a sinuous border.

Later handaxes were created with a soft billet of antler or wood and are much thinner, more symmetrical, and have a straight edge.

An experienced flintknapper needed less than 15 minutes to produce a good quality hand ax. A simple hand axe can be made from a beach pebble in less than 3 minutes.

Hand axes are mainly made of flint, quartzites, and other rather coarse rocks. It depended on what stones were available in the vicinity.

Obsidian was rarely used because it is not widely found, but was prized for its ability to produce a brilliant blade, but shatters more easily than flint. Several basic shapes, like cordate, oval, or triangular, have been documented.

How to make an arrowhead

Flintknapping a spearhead from a rock

“For mankind, it was a giant leap for a species that evolved from the Stone Age to create sophisticated rockets and spacecraft that made a Moon landing possible.”
– Buzz Aldrin