Sue is the largest, most extensive and best-preserved Tyrannosaurus rex specimen ever found, at over 90% original. It was discovered in 1990 by Sue Hendrickson, an explorer and fossil collector, and was named after her.

This fossil was auctioned in 1997, for US$ 8.3 million, the highest amount ever paid for a dinosaur fossil, and is now a permanent feature at the Field Museum of Natural History in Chicago, Illinois.

During 1990, Sue Hendrickson decided to explore the nearby cliffs, and as she was walking along the base of a cliff, she discovered some small pieces of bone.

She looked above her to see where the bones had originated and observed larger bones protruding from the wall of the cliff.

She returned to camp with two small pieces of the bones and reported the discovery to the group of workers she was part of, from the Black Hills Institute. It was determined that the bones were from a T. rex by their distinctive contour and texture.

The Black Hills’ crew and Hendrickson began to uncover the bones, and they discovered that much of the dinosaur had been preserved. Previously discovered T. rex skeletons were usually missing over half of their bones.

Scientists believe that this specimen was covered by water and mud soon after its death, which prevented other animals from carrying away the bones.

The large size and excellent condition of the bones were also surprising. The skull was 1,394 mm (54.9 in) long, and most of the teeth were still intact. Soon after the fossils were found, a dispute arose over their legal ownership.

The species Tyrannosaurus Rex, rex meaning “king” in Latin,  is often called T-Rex colloquially. Tyrannosaurus lived throughout what is now western North America, on what was then an island continent.

Fossils are found in a variety of rock formations dating to 68 to 66 million years ago. It was among the last non-avian dinosaurs to exist before the Cretaceous–Paleogene extinction event.

More than 50 specimens of Tyrannosaurus rex have been identified. Soft tissue and proteins have been reported in at least one of these specimens.

The abundance of fossil material has allowed significant research into many aspects of its biology, including its life history and biomechanics.

Since the Tyrannosaurus rex was first described in 1905, it has become the most recognized dinosaur species in popular culture. 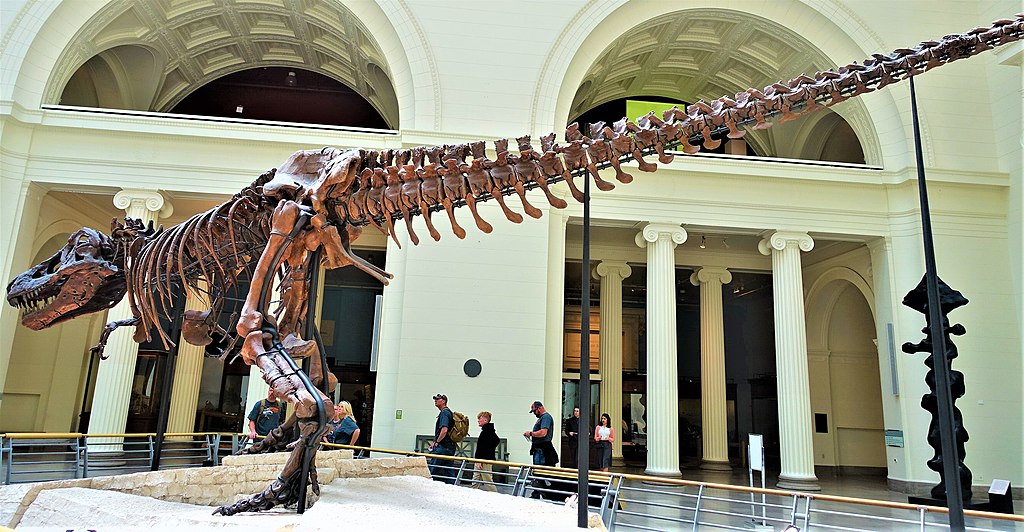 “The dinosaurs disappeared because they could not adapt to their changing environment. We shall disappear if we cannot adapt to an environment that now contains spaceships, computers — and thermonuclear weapons.
– Arthur C. Clarke

Asteroids have us in our sight. The dinosaurs didn’t have a space program, so they’re not here to talk about this problem. We are, and we have the power to do something about it. I don’t want to be the embarrassment of the galaxy, to have had the power to deflect an asteroid, and then not, and end up going extinct.
– Neil deGrasse

We can’t manipulate some stars while maintaining other stars as controls; we can’t start and stop ice ages, and we can’t experiment with designing and evolving dinosaurs.
– Jared Diamond

We all have a dinosaur deep within us, just trying to get out.
– Colin Mochrie

You’re not allowed to call them dinosaurs any more,” said Yo-less. “It’s speciesist. You have to call them pre-petroleum persons.
– Terry Pratchett

Sixty-five million years ago, the dinosaurs had a bad day.
– Phil Plait

The dinosaurs’ eloquent lesson is that if some bigness is good, an overabundance of bigness is not necessarily better.
– Eric Johnston

Not since the Lord himself showed his stuff to Ezekiel in the valley of dry bones had anyone brought such grace and skill to the reconstruction of animals from disarticulated skeletons. Charles R. Knight, most celebrated of artists in the reanimation of fossils, painted all the canonical figures of dinosaurs that fire our fear and imagination to this day.
– Stephen Jay Gould

What do you call a T.Rex who can’t accept defeat?  – A saur loser.

How did dinosaurs decorate their bathrooms? – With rep-tiles.

What do you call a dinosaur with one eye? – Do-you-think-he-saurus.

How did the T-rex feel after working out? – Dino-sore.

What did the dinosaur say to the cashier? – Keep the climate change.

What do you get when you cross a tyrannosaurus rex with explosives? – Dino-mite.

What do you call a dinosaur with an extensive vocabulary? – A thesaurus.

Which dinosaur could never decide whether to leave or not? – A stay-go-saurus.

Who used to enforce law and order in prehistoric times? – The tricera-cops.

What do you call a dinosaur at the rodeo? – A bronco-saurus.

Trying to put dinosaur skeletons back together must be a mammoth task.

What does a dinosaur with sleep apnea do? – He dino-snores.