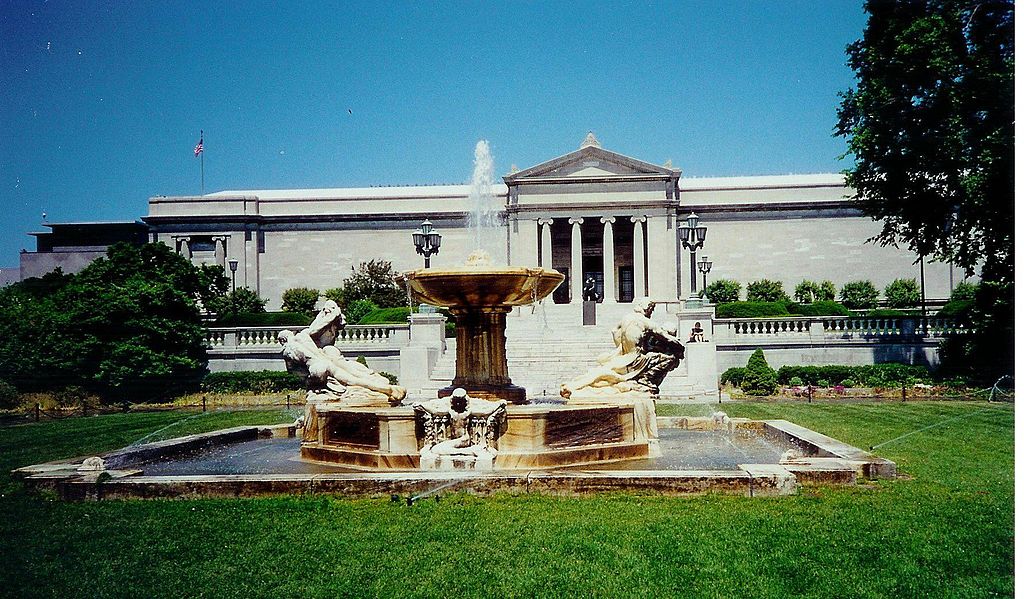 The Cleveland Museum of Art (CMA) is an art museum, internationally renowned for its holdings of Asian and Egyptian art, the museum’s collection has a diverse permanent collection of more than 45,000 works of art from around the world.

The Cleveland Museum of Art, in addition to its permanent collection, provides special exhibitions, lectures, films, and musical programs.

The department of performing arts, music, and film hosts a film series and the museum’s Performing Arts events.

Highlights of the Cleveland Museum of Art

“The Burning of the Houses of Parliament” by J. M. W. Turner

The painting shows the Houses of Parliament overwhelmed in golden flames, which are consuming the chamber of the House of Commons.

This depiction is the view from downstream, close to Waterloo Bridge, and shows the fire and smoke blowing dramatically over the Thames as the London spectators look on from the river bank and boats.

The Stargazer (Statuette of a Woman)

This 5,000-year-old marble sculpture of a female figure is called the “Stargazer.” The name derives from the way her eyes are looking up to the stars above.

Created in translucent marble, this is an unusual sculpture because her head is sculptured entirely in the round. Her body is reduced to a simple yet elegant profile.

The nose is depicted as a slight ridge on a straight-line edge. The head tilted backward; the eyes are tiny dots raised in relief.

“The Emperor as Philosopher” is a bronze statue which is probably of Roman Emperor Marcus Aurelius.

He was Emperor of Rome from 161 to 180 AD and was a practitioner of Stoicism. His writings, known as “Meditations,” are a significant source of our understanding of the ancient Stoic philosophy and is one of the notable works of philosophy.

The figure was intended to represent Italian poet Dante pondering “The Divine Comedy,” his epic classic of Paradise and Inferno.

Initially, this masterpiece had several other names, including “The Poet.” In 1889, Rodin exhibited the sculpture independently of The Gates, giving it the title “The Thinker,” and in 1902, he embarked on this larger version.

It has since become one of his most recognized masterpieces.

Gudea was the political and religious governor of Lagash, one of the oldest Sumerian cities in Ancient Mesopotamia. Gudea ruled between 2144 – 2124 BC, and about twenty-seven statues of Gudea have been found.

These 4,000-year-old statues show a very advanced level of craftsmanship for the time.

Also, more than 2,400 inscriptions have been found that mention his name and describe his 20-year campaign of city improvements, which included new temples and irrigation canals. He was also a patron of the arts.

Many statues of Gudea, both seated and standing, can be found in museums across the world.

Tissot left Paris after the Franco-Prussian War and resided in London from 1871.

“The Call” by Paul Gauguin

“The Call” by Paul Gauguin is part of a series of the artist’s late works that explore the mysteries of life and death. Two women stand bare feet, with one of the women gesturing to someone outside the picture.

Gauguin, at this late stage in his life, was painting from memory and imagination to achieve mysterious, dreamlike images. Paul Gauguin was preparing himself to respond to his “call” from destiny.

ousseau’s imaginative visions and the technique of painting was unique. He applied one layer at a time, creating multiple layers, and he carefully blended his brushstrokes to create a smooth surface.

Masterpieces of the Cleveland Museum of Art

A Summary of all the links related to the Cleveland Museum of Art.

“Cupid and Psyche” by Jacques-Louis David

“Cupid and Psyche” by Jacques-Louis David depicts the challenge of between idealized love and physical reality. Cupid is the lover of the mortal Psyche, and he visited her nightly on the condition that she does not know his identity.

Cupid was usually depicted as an ideal adolescent, but in this painting, David presents him as an ungainly teenager smirking at his sexual conquest.

David’s inspiration for the depiction of Cupid included a recently published Greek poem that described Cupid as a trickster with flashing eyes and curly hair.

Cleveland Museum of Art – 5 galleries you should see