Gudea was the political and religious governor of Lagash, one of the oldest Sumerian cities in Ancient Mesopotamia. Gudea ruled between 2144 – 2124 BC, and about twenty-seven statues of Gudea have been found.

These 4,000-year-old statues show a very advanced level of craftsmanship for the time. More than 2,400 inscriptions have been found that mention his name and describe his 20-year campaign of city improvements, which included new temples and irrigation canals.

He was also a patron of the arts. Many statues of Gudea, both seated and standing, can be found in museums across the world. 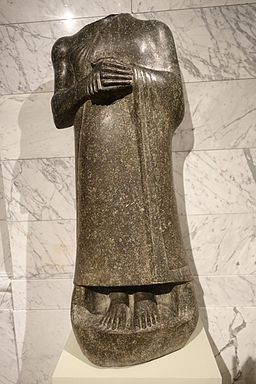 Many of Gudea’s statues had their heads severed to destroy their ritual potency. This statue of Gudea with hands clasped is a common motif shared across many of the Gudea figures.

The hands create a distinctive pose that repeats in both seated and standing versions, and it is an expression of devotion, humility, and piety.

The purpose of the statues was to represent the ruler in temples and to offer a constant prayer on his behalf. Most of the sculptures bear an inscribed dedication explaining to which god it was dedicated.

Gudea’s commissioned many statues depicting himself with life-like realism, to be placed in temples throughout Sumer. He also funded many offerings to the temples with his name inscribed to highlight his generosity and loyalty.

Other than Sargon (the first ruler of a Sumerian city-state empire), Gudea was one of the early rulers to claim divinity, and some of his achievements were later added to the Gilgamesh Epic.

Unfortunately, after Gudea died, the influence of Lagash, the city-state he governed, declined until it suffered a military defeat. Was it these new conquerors who decapitated many of the statues or the idols of Gudea?

Lagash was one of the oldest cities of the Ancient Near East located northwest of the junction of the Euphrates and Tigris rivers and east of Uruk.

Lagash was a critical Sumerian city in the late 3rd millennium BC and was ruled by independent kings, but with the Akkadian conquest, Lagash lost its independence.

Lagash’s rulers become vassals of Sargon of Akkad and his successors, but Lagash continued to be a city of importance and a center of artistic development.

After the collapse of Sargon’s empire, Lagash again thrived under its independent governors such as Gudea and had extensive commercial communications with distant kingdoms.

According to his records, Gudea brought cedars from Lebanon, diorite from eastern Arabia, copper, and gold from central and southern Arabia. Gudea’s era was characterized by artistic development.

We know what Gudea looked like since he placed in temples throughout his city, many statues depicting himself with life-like realism.

At the time of Gudea, the kingdom covered an area of about 1,600 square kilometers (620 sq mi). It contained 17 larger cities, eight district capitals, and about 40 villages.

According to some estimates, Lagash was one of the largest cities in the world from c. 2075 to 2030 BC.

A Virtual Tour of Mesopotamian Art and Artifact

“Wealth is far away, poverty is close at hand.“
– Sumerian Proverb