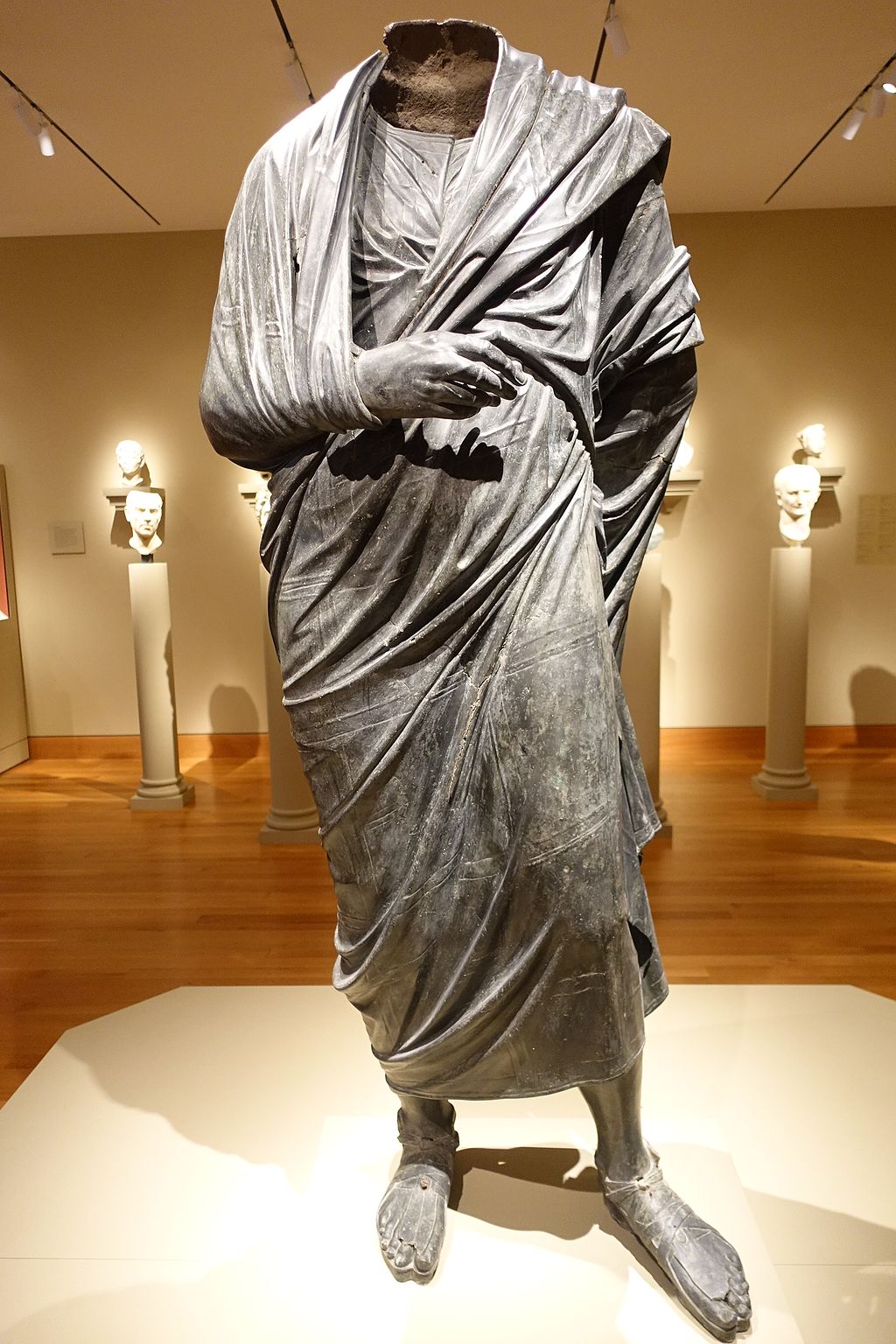 “The Emperor as Philosopher” is a bronze statue with a missing head. The sculpture was cast in 29 pieces, expertly joined together to create one figure with the head, now lost.

It is assumed that the majestic quality of execution and the monumental scale of this over-life-size sculpture implies that this is an imperial portrait of an Emperor.

The pose of the figure is like several Greek depictions of Philosophers. Thus, this draped statue is assumed to be the Philosopher Emperor, Marcus Aurelius.

Marcus Aurelius was Emperor of Rome from 161 to 180 AD and was a practitioner of Stoicism.

His writings, known as “Meditations,” are a significant source of our understanding of the ancient Stoic philosophy and is one of the notable works of philosophy. 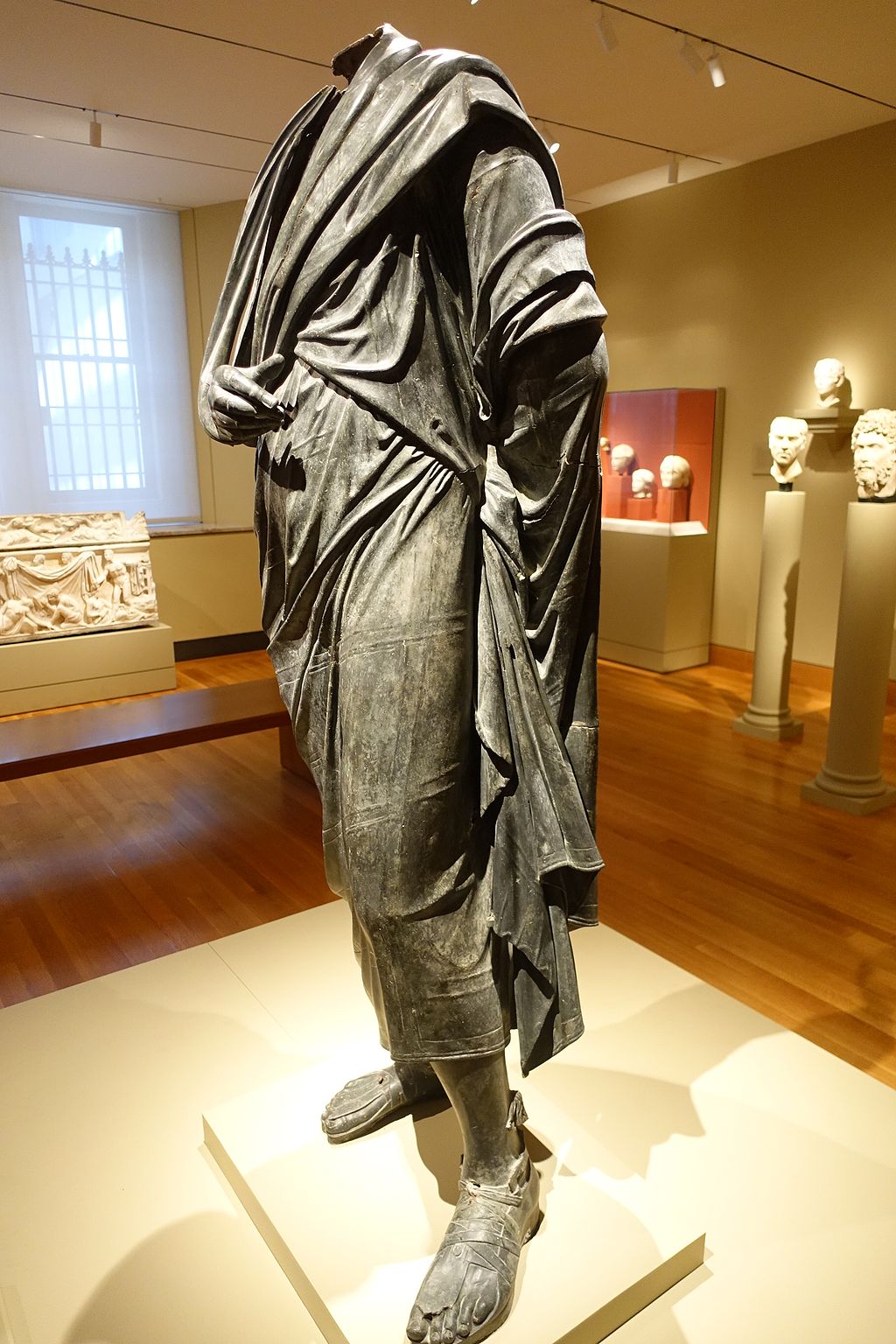 Aurelius’ Meditations, were written in Greek while on military campaigns, is admired as a literary monument to a philosophy of service and duty.

The meditations focus on finding and maintaining stability and composure during periods of conflict by following nature as a source of inspiration.

Marcus Aurelius died in 180 AD and was deified by the Roman state. His ashes were interred in Hadrian’s mausoleum, the modern-day Castel Sant’Angelo until Rome was sack in 410 by Visigoths.

The oldest surviving complete manuscript copy of his writings is in the Vatican library and dates to the 14th century. 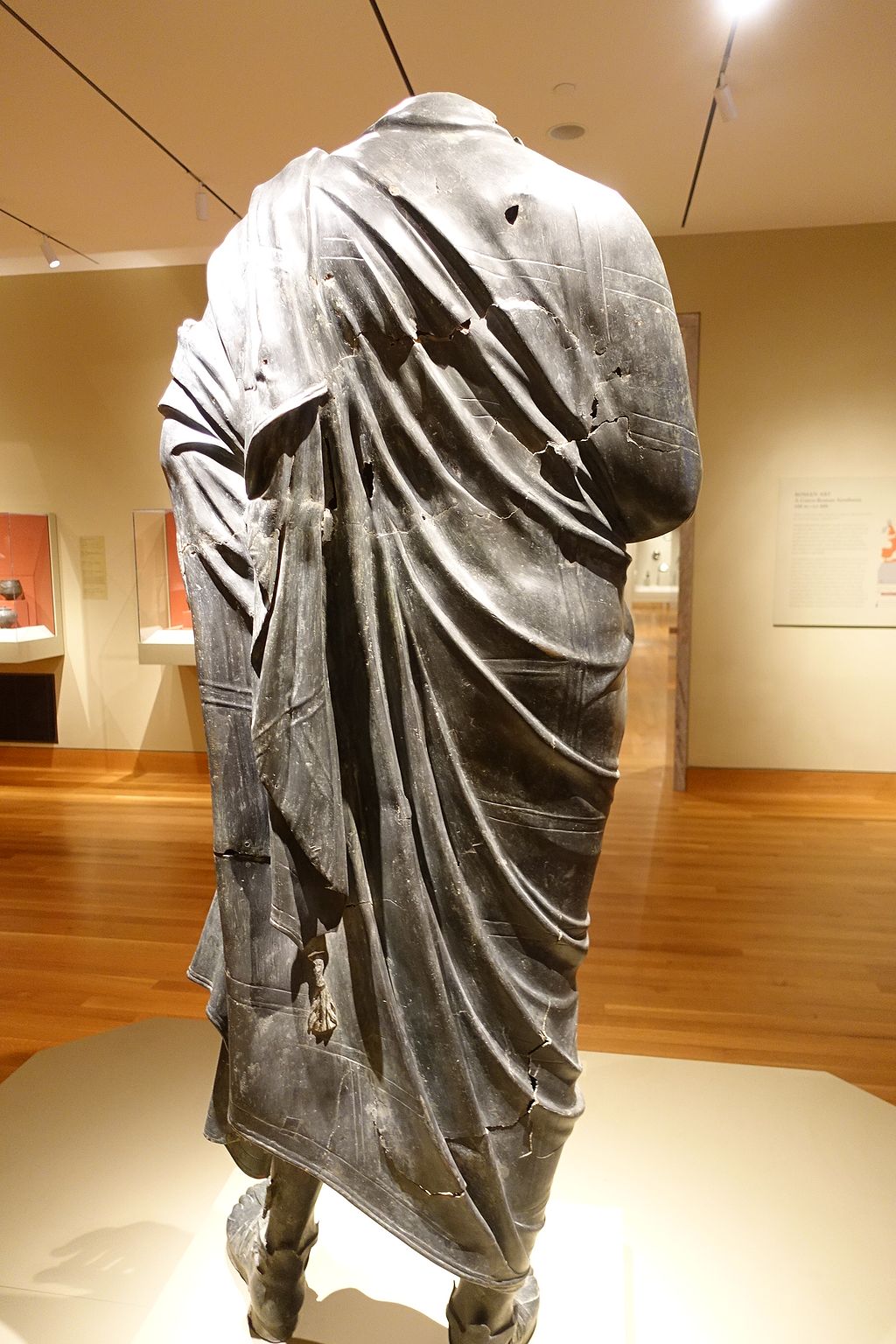 Aurelius’ Meditations was a favorite of Frederick the Great, John Stuart Mill, and Goethe.

Modern political figures such as Wen Jiabao (6th Premier of the People’s Republic of China) and Bill Clinton (42nd President of the United States) are also admirers of the philosophical writings of this Emperor Philosopher.

They would also have significantly admired this statue of the Emperor as Philosopher.

He is also seen as the last emperor of the Pax Romana, an age of relative peace and stability for the Empire. His philosophical writings, now commonly known as Meditations, are a significant source of the modern understanding of ancient Stoic philosophy.

Marcus was born into a Roman patrician family. He was educated at home, as children from Roman aristocratic families often were. His tutors sparked his interest in philosophy, and he studied Greek and Latin.

Marcus’ reign was marked by military conflict. In the East, the Roman Empire fought successfully with a revitalized Parthian Empire and the rebel Kingdom of Armenia.

“Accept the things to which fate binds you, and love the people with whom fate brings you together, but do so with all your heart.”

“Very little is needed to make a happy life; it is all within yourself, in your way of thinking.”

“The universe is transformation: life is opinion.”

“Whatever the universal nature assigns to any man at any time is for the good of that man at that time.”

“Nothing happens to any man that he is not formed by nature to bear.”

“The universe is change; our life is what our thoughts make it.”

“The art of living is more like wrestling than dancing.”

“The object of life is not to be on the side of the majority, but to escape finding oneself in the ranks of the insane.”

“You have power over your mind – not outside events.
Realize this, and you will find strength.”
– Marcus Aurelius