The Stargazer – Statuette of a Woman

This 5,000 year-old marble sculpture of a female figure is called the “Stargazer.” The name derives from the way her eyes are looking up to the stars above.

Created in translucent marble, this is an unusual sculpture because her head is sculptured entirely in the round. Her body is reduced to a simple yet elegant profile.

The nose is depicted as a slight ridge on a straight-line edge.  The head tilted backward; the eyes are tiny dots raised in relief. 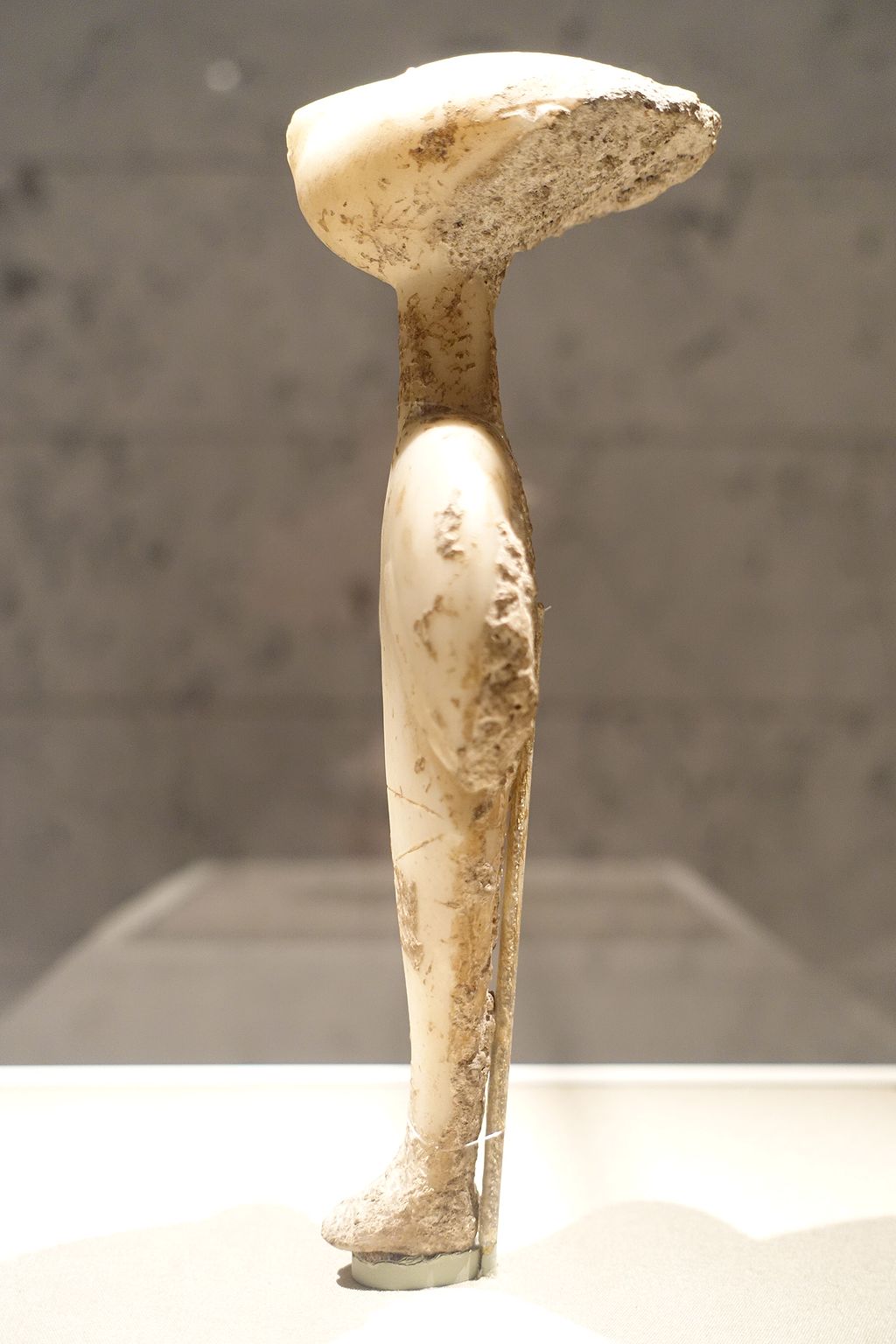 The Stargazer is similar and related to the  Cycladic Art which flourished in the islands of the Aegean Sea. However, this ancient masterpiece was found in Western Anatolia.

Western Anatolia was one of the significant crossroads of ancient civilizations. Created in the Early Bronze Age, the purpose of this masterpiece is not known.

All we can do is speculate on the creative and spiritual forces that shaped this beautiful and mystical figure that symbolizes our search for the divine.

The Ancient Cycladic culture flourished in the islands of the Aegean Sea from c. 3300 to 1100 BCE. Along with the Minoan civilization and Mycenaean Greece, the Cycladic people are counted among the three dominant Aegean cultures.

The best-known type of artwork that has survived is the marble figurines, most commonly in the form of a single full-length female figure.

Apart from a sharply-defined nose, the faces are smooth and blank, although there is evidence on some that they were originally painted.

The first archaeological excavations occurred in the 1880s. These were followed by more systematic work to investigated burial sites on several islands in 1898–99.

The archaeologists coined the term “Cycladic Civilization,” but interest in these figures then lagged as the focus of museums moved to the search for ancient monumental art and artifacts.

Interest picked up again in Cycladic Art in the mid-20th century, as collectors competed for these ancient sculptures as the interest in modern art and their resemblance to contemporary art became evident.

Sites were looted, and a brisk trade in forgeries arose. Only about 40% of the 1,400 figurines discovered have a known origin since looters destroyed evidence from the find sites and their origins.

The context for many of these Cycladic Figurines has thus been mostly destroyed; their meaning may never be completely understood.

The majority of these figures are highly stylized representations of the nude female human form. They typically had a flat, geometric quality, which gives them a striking resemblance to today’s modern art.

Most experts who have considered these artifacts from an anthropological or psychological viewpoint have assumed that they are representative of a Great Goddess of Nature.

The archaeological evidence suggests that these images were used in funerary practice as they were found in graves.

The Cycladic culture was a Bronze Age culture (3200 – 1050 BC) found throughout the islands of the Cyclades in the Aegean Sea.

The culture is best known for its schematic flat female idols carved out of the islands’ pure white marble centuries before the Minoan civilization arose in Crete.

This distinctive Neolithic culture was an amalgamation of Anatolian and mainland Greek elements and arose in the western Aegean before 4000 BC.

Its survival was based on emmer wheat and wild barley, sheep and goats, pigs, and tuna that were speared from small boats. Significant excavated sites include Saliagos, Naxos, and Kephala.

The Cycladic culture was eventually submerged in the rising influence of Minoan Crete.

Excavations at Knossos on Crete revealed the impact of Cycladic civilization upon Knossos in the period 3400 to 2000 BC, as evidenced by pottery finds at Knossos.

The Stargazer – Statuette of a Woman

Stargazer From the 3rd Millennium BC

“I declare that later on,
Even in an age unlike our own,
Someone will remember who we are.”
-Sappho