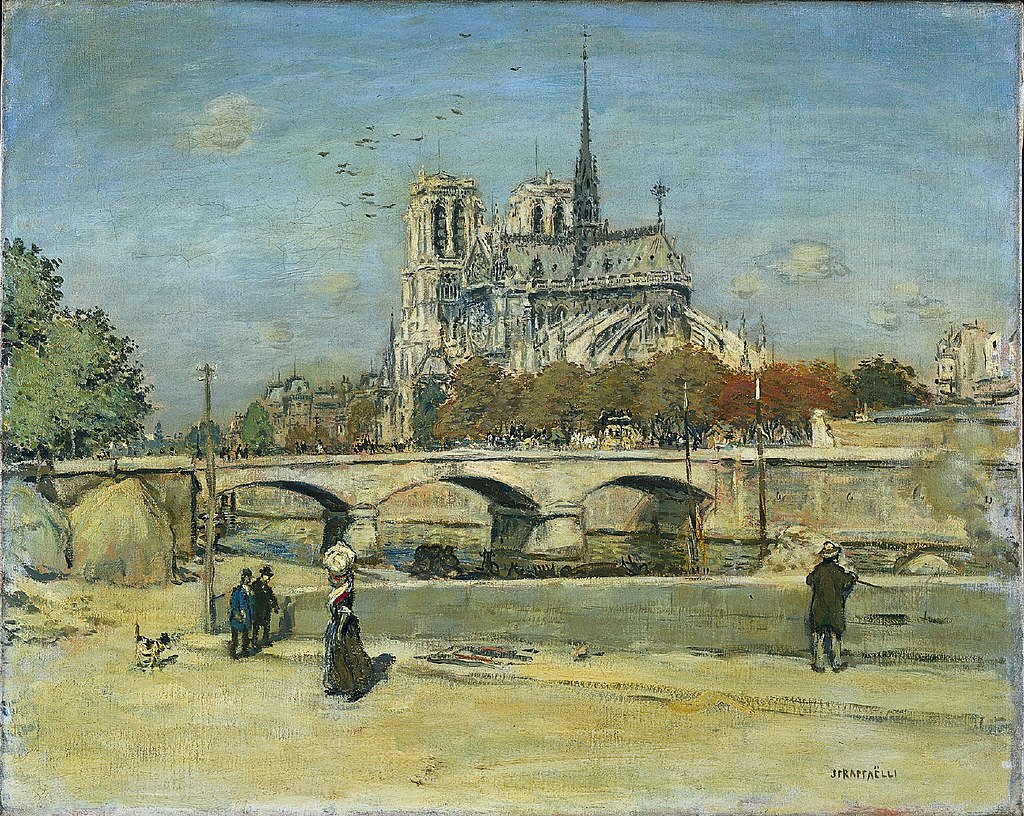 The flying buttress was a vital innovation, before the buttresses, all the weight of the roof pressed out and down to the walls.

With the flying buttress, the weight was carried by the ribs of the vault outside the structure to a series of counter-supports.

The buttresses meant that the walls of Notre Dame could be higher and thinner, and could have much larger windows.

Interest in the cathedral grew after the publication, in 1831, of Victor Hugo’s novel The Hunchback of Notre-Dame.

The public interest led to a significant restoration project between 1844 and 1864, during which a taller and more ornate reconstruction of the original spire was added, as well as adding the sculpture of mythical creatures on the Galerie des Chimères.

The restoration lasted twenty-five years, and the Spire height was 91.44 meters (300.0 ft). The spire was surrounded by copper statues of the twelve Apostles, in four groups of three, one group at each point of the compass.

While in place, they had faced outwards towards Paris, except for one. The statue of Saint Thomas, the patron saint of architects, faced the spire and had the features of the head restorer from 1844.

The two towers are sixty-nine meters high and were the tallest structures in Paris until the completion of the Eiffel Tower in 1889.

The towers were the last major element of the cathedral to be constructed. The south tower was built first, between 1220 and 1240, and the north tower between 1235 and 1250.

The newer north tower is slightly larger, as is the buttress of the north tower, which is more extensive.

The north tower is accessible to visitors by a stairway. The stairway has 387 steps and has a stop at the Gothic hall at the level of the rose window. The ten bells of the cathedral are located in the south tower.

Jean-François Raffaëlli (1850 – 1924) was a French realist painter, sculptor, and printmaker who exhibited with the Impressionists.

Degas invited Raffaëlli to take part in the Impressionist exhibitions of 1880 and 1881, an action that divided the group.

Monet was resentful of Degas’s insistence on expanding the Impressionist exhibitions by including several realists and chose not to exhibit.

Notre-Dame de Paris means “Our Lady of Paris” and is also known as Notre-Dame Cathedral or simply Notre-Dame. It is a medieval Catholic cathedral on the Île de la Cité in Paris, France. The cathedral is one of the finest examples of French Gothic architecture.

In the 1790s, Notre-Dame suffered desecration during the French Revolution when much of its religious imagery was damaged or destroyed.

Standing the test of time: Notre-Dame Cathedral in Paris

“The last time I saw Paris, her heart was warm and gay, I heard the laughter of her heart in every street café.”
– Oscar Hammerstein