Elvis Aaron Presley (1935 – 1977) was an American singer, songwriter, and actor. Elvis is one of the most significant cultural icons of the 20th century. He is referred to as the “King of Rock and Roll,” or only “the King.”  The Rock and Roll Hall of Fame and Museum has a collection of historical exhibits dedicated to Elvis Presley’s influential role in the history of music.

The electric guitar above is a 1963 Gibson EBS 1250, which was used by Elvis in the film “Spinout.” Elvis liked the guitar, and he brought it for his personal use. This Gibson Guitar has a six-string bass, which is rare. 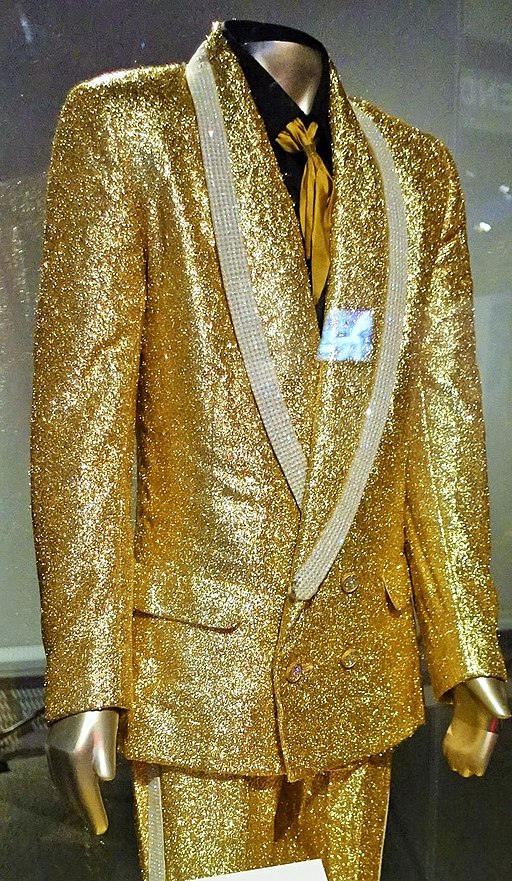 This Elvis Presley Suit was designed by Bill Belew in 1968 but was never worn on screen. Elvis ended up wearing a gold jacket with the black pants ensemble for the “1968 Comeback Special,” which scored the year’s highest ratings for NBC. 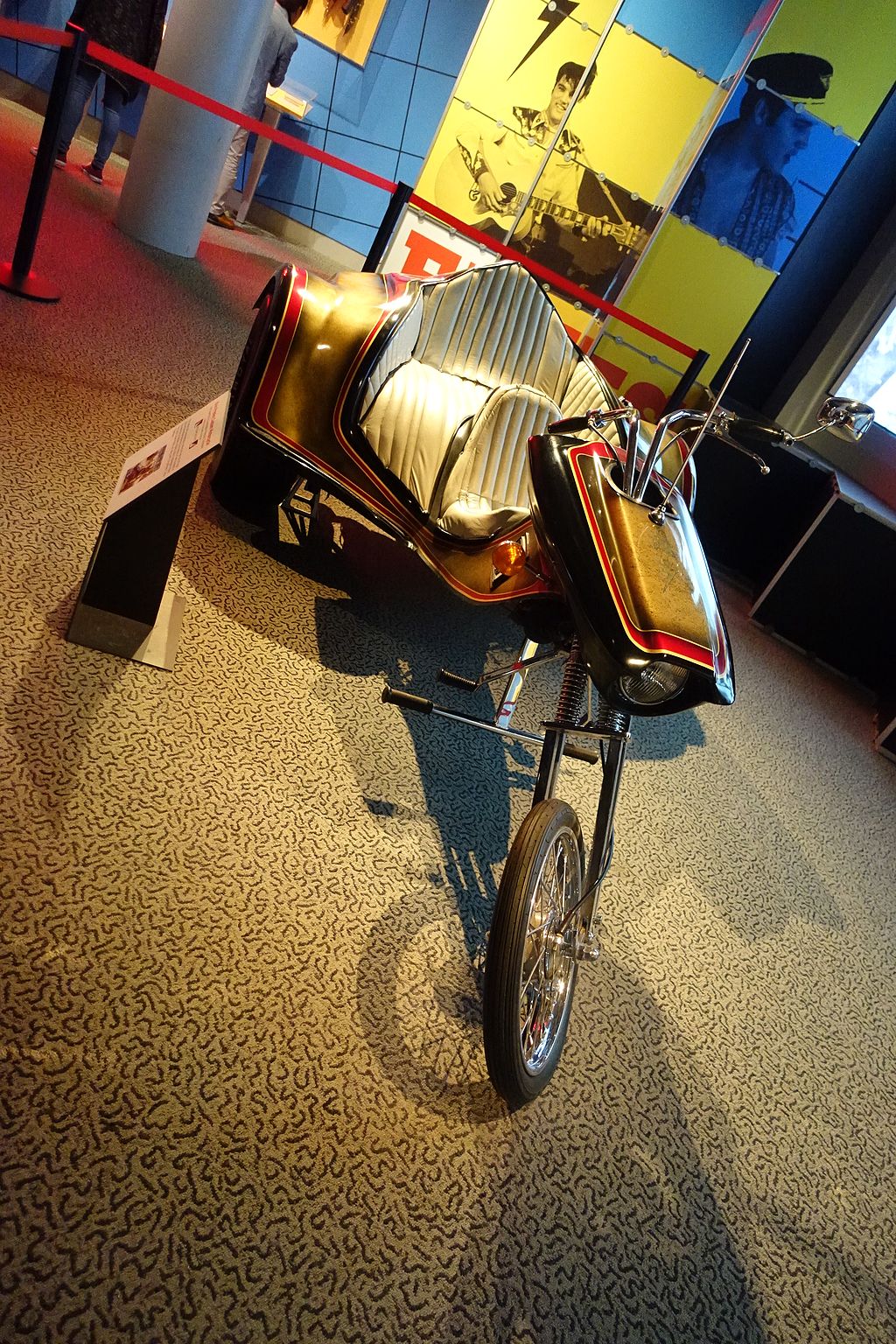 This custom three-wheel motorcycle was owned and driven by Elvis Presley. Built during 1975 by Supercycles of Memphis, Tennessee, it features a 65bhp, 1600cc Volkswagen engine.

Presley was born in Tupelo, Mississippi, and relocated to Memphis, Tennessee, with his family when he was 13 years old. His music career began there in 1954 with a producer who wanted to bring the sound of African-American music to a broader audience. Presley was a pioneer of rockabilly, a fusion of country music and rhythm and blues. Presley’s “Heartbreak Hotel” was released in January 1956 and became a number-one hit in the United States. With a series of successful network television appearances and chart-topping records, he became the leading figure of the newly popular sound of rock and roll. His energized interpretations of songs and sexually provocative performances made him enormously popular.

In 1956, Presley made his film debut in “Love Me Tender.” After being drafted into military service in 1958, Presley relaunched his recording career two years later with some of his most commercially successful work. He held few concerts but devote much of the 1960s to making Hollywood films and soundtrack albums. In 1968, following a seven-year break from live performances, he returned to the stage in the acclaimed television comeback special Elvis, which led to an extended Las Vegas concert residency and a string of highly successful tours. In 1973, Presley gave the first concert by a solo artist to be broadcast around the world, Aloha from Hawaii.

Years of prescription drug abuse severely compromised his health, and he died suddenly in 1977 at his Graceland estate at the age of 42. Commercially successful in many genres, including pop, country, blues, and gospel, he is the best-selling solo artist in the history of recorded music. He has been inducted into multiple music halls of fame.

Elvis Aron Presley at Rock and Roll Hall of Fame

“I feel my temperature rising. Help me; I’m flaming, I must be a hundred and nine.”

“A little less fight and a little more spark, close your mouth, and open your heart.”

“Truth is like the sun. You can shut it out for a time, but it ain’t goin’ away.”

“If you let your head get too big, it’ll break your neck.”

“Rock and roll music, if you like it, if you feel it, you can’t help but move to it. That’s what happens to me. I can’t help it.”

“Until we meet again, may God bless you as he has blessed me.”

“I would beg and steal just to feel your heart beating close to mine.”

“I’m not trying to be sexy. It’s just my way of expressing myself when I move around.”

“The first car I bought was the most beautiful car I’ve ever seen. It was secondhand, but I parked it outside of my hotel.”

“After a hard day of basic training, you could eat a rattlesnake.”

“Envy someone an’ it pulls you down. Admire them, and it builds you up. Which makes more sense?”

“If you cry when you’re in love, it sure ain’t no disgrace.”

“The image is one thing, and the human being is another. It’s very hard to live up to an image, put it that way.”

“A live concert to me is exciting because of all the electricity that is generated in the crowd and on stage. It’s my favorite part of the business, live concerts.”

“The Lord can give, and the Lord can take away. I might be herding sheep next year.”

“A lot of people seem to think I started this business. But rock ‘n’ roll was here a long time before I came along. Nobody can sing that kind of music like colored people. Let’s face it: I can’t sing like Fats Domino can. I know that.”

“Rock and roll music, if you like it, if you feel it, you can’t help but move to it.
That’s what happens to me. I can’t help it.”
– Elvis Presley