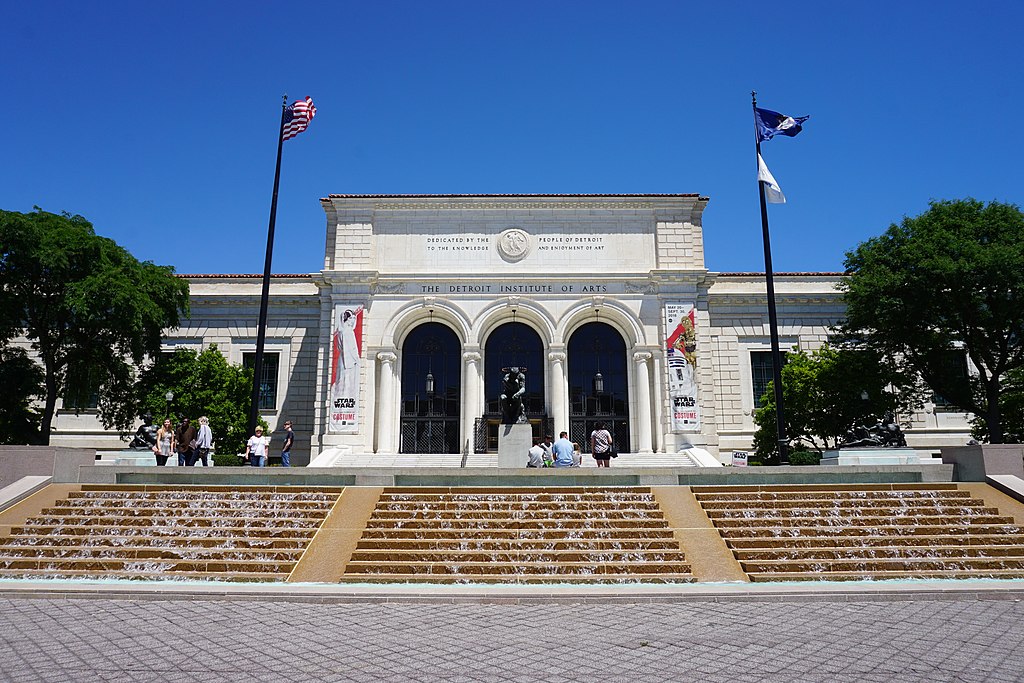 The museum’s collection from around the world spans cultures and art from ancient Egyptian and European works to contemporary art. The armor collection lines the main hall entryway to the grand court.

Diego Rivera’s Detroit Industry cycle of frescoes spans the upper and lower levels to surround the central grand marble court of the museum.

Virtual Tour of the Detroit Institute of Arts

Highlights Tour of the Detroit Institute of Arts

“The Wedding Dance” by Pieter Bruegel the Elder

“The Wedding Dance” by Pieter Bruegel the Elder, depicts wedding guests at a village wedding at the time of the Renaissance. As was customary at that time, the bride is wearing black, and men are wearing prominent codpieces.

Dancing was disapproved of by the authorities and the church, so this painting can be seen as either an entertaining depiction of the overindulgent peasant enjoying an opportunity to celebrate and indulge or as a moralizing tale.

The wedding guests wearing clothing from the times, presented in an outdoor party surrounded by trees. In the middle of the composition is the bride with a black dress and red hair dancing with her father’s older man.

In the background, to the right, is hanging a tablecloth decorated with a crown, and beneath it is the bride’s table. The pipers are playing the bagpipes in the foreground to the right.

“Arrangement in Gray: Portrait of the Painter” by James McNeill Whistler

“Arrangement in Gray: Portrait of the Painter” by James Abbott McNeill Whistler explores the challenges in technique and composition.

Whistler also reflected on his own psyche. The image is dominated by a cool, appraising gaze with deceptive immediacy.

The composition of the portrait reveals a strong Japanese influence with its flattened forms and gradations of color.

“Nocturne in Black and Gold: The Falling Rocket” by James Abbott McNeill Whistler

The painting exemplified the Art for art’s sake movement. It is one of his series of Nocturnes and the last of the London Nocturnes. Whistler’s depiction of the city park includes a fireworks display in the foggy night sky.

It is fundamentally composed of three main colors: blue, green, and yellow. The billowing smoke provides a clear distinction between the water and the sky, where the separation blurs into a cohesive space.

Dabs of yellow enliven the exploding fireworks in the misty air. The figures watching are almost transparent, their shapes general and simplistic.

“Watson and the Shark” by John Singleton Copley

“Watson and the Shark” by John Singleton Copley depicts the rescue of the boy from a shark attack in Havana harbor, Cuba. This painting is based on the true story of an attack that took place in 1749.

The English boy Brook Watson, then a 14-year-old cabin boy, lost his leg in the attack. He was not rescued until the third attempt by the shark, which is the subject of the painting.

The shark attack on Watson resulted in the loss of his right leg below the knee. However, he went on to have a distinguished career, including becoming a Lord Mayor of London.

Watson, while swimming alone in Havana harbor, was attacked by a shark, and the shark attacked twice before Watson was rescued.

The Detroit Institute of Arts

“I was brought up in this part of Detroit that they used to call the ghetto.”
– Diana Ross