The “Detroit Industry Murals” by Diego Rivera are a series of twenty-seven frescoes depicting industry in Detroit in the 1930s. At the time, Detroit manufactured automobiles, ships, tractors, and airplanes and was an impressive integrated industrial manufacturing center.

The frescoes surround the interior of the Rivera Court in the Detroit Institute of Arts. The two largest murals located on the north and south walls of the interior court depict the workers at the Ford River Rouge Complex in Dearborn, Michigan.

The north wall puts the worker at the center and depicts Ford’s famous 1932 V8 engine’s manufacturing process. Rivera started the project by researching the facilities at the Ford River Rouge Complex.

The artist spent three months touring all of the plants, preparing hundreds of sketches and concepts for the mural. Rivera also had a photographer to aid his research in finding visual concepts.

Rivera was amazed by the technology and modernity of Detroit’s plants. He also spent some time at the Parke-Davis pharmaceutical plant in Detroit to research Detroit’s industries’ murals. 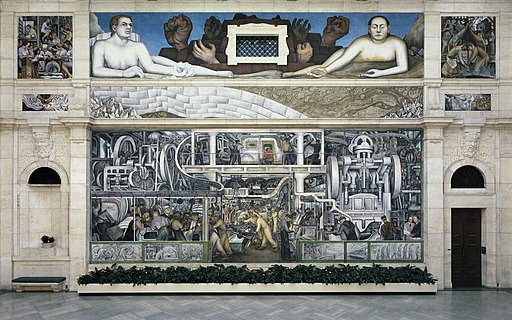 On the right and left side, he portrayed the chemical industry where he juxtaposed scientists producing poison gas for warfare and producing vaccines for medical purposes.

During this period, Detroit had an advanced industrial economy, and it was the site of the largest manufacturing industry in the world. The Detroit automotive industry was vertically integrated, with the capacity to manufacture every component for their motor cars.

The murals explore the relationship between humanity and the machine. While machines were made to enhance humankind’s abilities, there were, at the time, concerns about the ethical rights of the working people.

Rivera represents the huge parts-pressing machines depicted in the mural with the iconography of his native Mexican statues depicting the ancient creation story of the Aztec goddess Coatlicue.

In Aztec mythology, Coatlicue was the mother of the gods. She gave birth to the moon, stars, and Huitzilopochtli, the sun and war god. The story was important to the Aztecs and summarized the complexity of their culture and religious beliefs.

Rivera contrasted the Aztec story with modern technology’s role and place, which became important culturally and was defended as passionately as a religion promising a better future.

Rivera started working on the “Detroit Industry Murals” in 1932, during the Great Depression. In Detroit, one out of four laborers were unemployed, and Rivera was aware of the atmosphere of protest against one of the world’s largest companies’ domination of its workers.

Diego Rivera (1886 – 1957) was a prominent Mexican painter whose frescoes helped establish the mural movement in art.

His fourth wife was fellow Mexican artist Frida Kahlo, with whom he had a volatile relationship that continued until her death.

Highlights of the Detroit Institute of Arts

“My cubist paintings are my most Mexican.”
– Diego Rivera