“Oregon City on the Willamette River” by John Mix Stanley

“Oregon City on the Willamette River” by John Mix Stanley was painted between 1850-1852 and depicts the Oregon Territory’s capital from its establishment in 1848 until 1851. The city rivaled Portland for early supremacy in the area.

Oregon City is located on the Willamette River near the southern limits of the Portland metropolitan area. Established in 1829 by the Hudson’s Bay Company, it became the first U.S. city west of the Rocky Mountains to be incorporated in 1844.

In 1847 Stanley embarked on his journey to the newly formed Oregon Territory. He conceived his “Oregon City on the Willamette River” composition during this trip, and it has become the only landscape of this historic town.

Stanley composed this painting following two trips to the late 1840s to sketch local Indians and scenery. This painting was completed a few years later. It became iconic for the development and expansion of the frontier.

Around the time Stanley visited Oregon City, the city had: 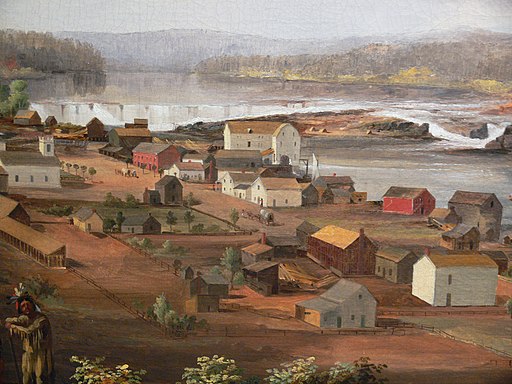 The city played a significant role in the early history of the Oregon Country. It was established near the confluence of the Clackamas River with the Willamette to take advantage of the power of Willamette Falls to run a lumber mill.

During the mid-1800s, it was the destination for those wanting to file land claims after traveling the Oregon Trail.

The painting reflected romanticism’s theme and appealed to an audience who viewed the West as opportunity and abundance. The city is shown as orderly houses, churches, and lumber mill depicting an idyllic village created out of the wilderness.

The painting also shows in the foreground a Native American family that has been displaced. In juxtaposition to the sunny depiction of the town, the Indians are shown in the ridge’s shadows.

The man leans on his rifle somewhat dejected while the woman sits on the ground in a melancholy scene of surrender to symbolize the pressures facing Oregon’s native inhabitants.

Stanley wrestled with contradictions of America’s Manifest Destiny and his respect for Native American culture and community.

Oregon City was the end of the Oregon Trail and the dream destination for many pioneers in the mid-nineteenth century. However, the population in the area of Oregon City later declined due to the California Gold Rush, and the capital moved to Portland.

Today, the center of the city retains part of its historic character by preserving houses and other buildings from the era of the city’s founding. 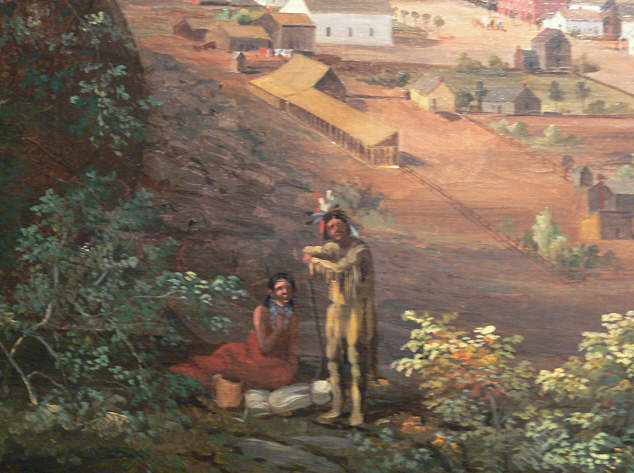 A Native American family that has been displaced

Oregon City on the Willamette River

Highlights of the Amon Carter Museum of American Art

“Ocean in view! O! The joy.”
– William Clark, journal entry upon sighting the Pacific Ocean at the Oregon Coast.