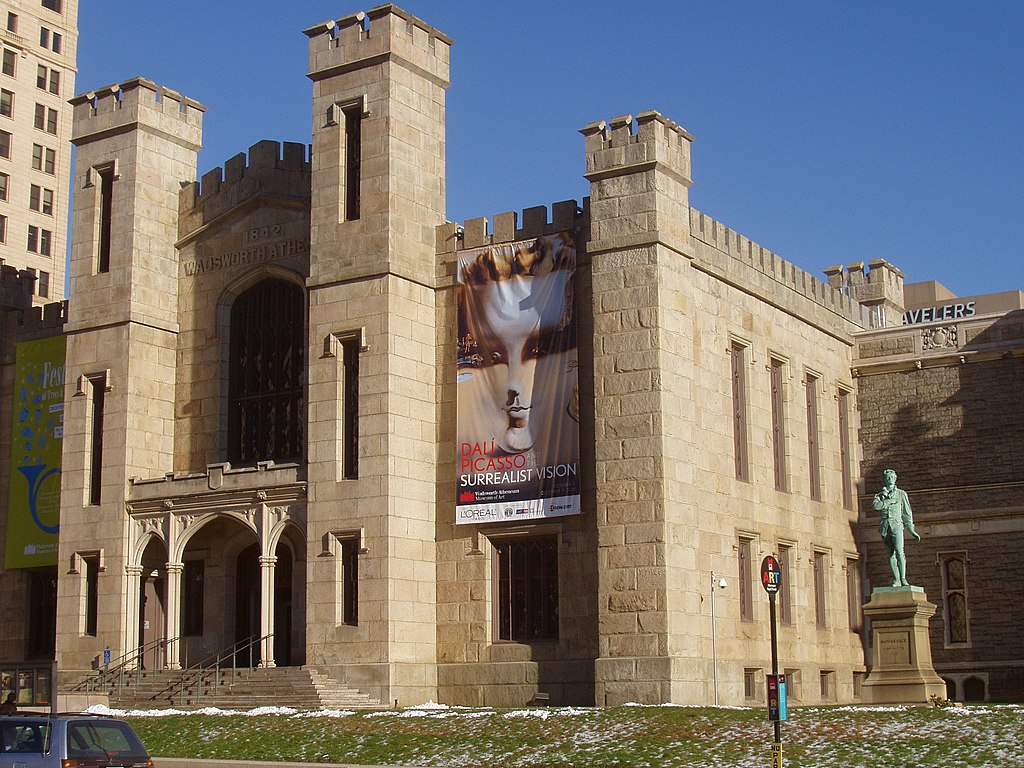 The Wadsworth Atheneum is an art museum noted for its collections of European Baroque art, ancient Egyptian and Classical bronzes, Impressionist paintings, Hudson River School landscapes, modernist, and contemporary works, as well as collections of furniture and decorative arts.

Founded in 1842, it is the oldest continually operating public art museum in the United States. The museum is housed in a distinctive castle-like building in downtown Hartford.

A Virtual Tour of the Wadsworth Atheneum

Highlights Tour of the Wadsworth Atheneum

“Daedalus and Icarus” by Orazio Riminaldi depicts the wrinkled face and tan, muscular right arm of the farther as he assists his young son with their only hope for freedom.

The young Icarus has curly hair, a smooth pale complexion, and the body of a boy. His brightly lit thigh and arm are in sharp contrast to the dark background creating an atmosphere that heightens the viewer’s empathy for the inevitable destiny of this youth.

Orazio Riminaldi (1593 – 1630) was an Italian painter who painted mainly history subjects in a Caravaggist style.

“Francis of Assisi in Ecstasy” by Caravaggio

“Francis of Assisi in Ecstasy” by Caravaggio depicts Saint Francis at the moment of receiving the signs of the Stigmata, the wounds left in Christ’s body by the Crucifixion.

In 1224 Francis retired to the wilderness with a small number of his followers to contemplate God. While he was praying on the mountain of Verna, Francis is said to have had a vision.

As a result of his vision, he received the stigmata. Brother Leo, who had been with Francis at the time, left a straightforward account of the event: “Suddenly, he saw a vision of a seraph, a six-winged angel on a cross. This angel gave him the gift of the five wounds of Christ.”

This painting was the first of Caravaggio’s religious canvasses and dates from 1595 when he had recently entered the household of Cardinal Francesco Maria Del Monte.

“Claude Monet Painting in His Garden at Argenteuil” by Pierre-Auguste Renoir depicts the famous impressionist Monet at his painting easel painting in his garden in Argenteuil.

The two friends Claude Monet and Pierre-Auguste Renoir, painted their first Impressionist paintings together at La Grenouillère in 1869 when they were both impoverished artists.

This painting of Monet by Renior was rendered four years later as they continued to struggle for recognition. One year after this painting, their fortunes reached a turning-point as the two friends came together with others for the first Impressionist Exhibition in Paris.

“The Fan” by James Tissot

“The Fan” by James Tissot was painted about 1875 in London, where he had been living after the Franco-Prussian War and the Paris Commune.

He lived in a comfortable home at St. John’s Wood, where he built an extension with a studio and conservatory.

In his new conservatory, Tissot painted some of his “Flirtation and Attraction” images, including “The Fan,” which celebrates his continuing fascination with Japonisme during this era.

A woman wearing a loose, pale yellow dressing gown leans against an embroidered silk draped over the back of an armchair as she fans herself.

Her dress is trimmed in pleated ruffles, and she wears the black ribbon around her neck. A yellow flower dangles from her coiled braids, echoing the motifs in the embroidered silk.

John Small, the British major, is shown preventing a fellow British soldier from bayoneting Warren. Trumbull wanted to express the poignancy in the conflict of men who knew each other and had earlier served together.

General Warren was an influential Massachusetts physician and politician. He was killed shortly after the storming of Breed’s Hill by British troops.

“Vase with Red Poppies” by Vincent van Gogh depicts one of the artist’s favorite subjects. Flowers were the subject of many of van Gogh’s paintings in Paris, and one of his many interests and fascinations.

Van Gogh wrote to his brother:  “You will see that by making a habit of looking at Japanese pictures, you will come to love to make up bouquets and do things with flowers all the more.”

Van Gogh advised his sister, Wil, to cultivate her garden to find joy and meaning in life. His paintings of sunflowers in vases are among his most well-known flower paintings. After he left Paris, van Gogh painted his second group of Sunflowers in Arles.

Vincent van Gogh made this painting of red poppies in Paris in 1886, where his friends sent bouquets weekly for his still-life paintings.

“The Lady of Shalott” by William Holman Hunt

“The Death of General Montgomery in the Attack on Quebec, December 31, 1775” by John Trumbull

Map of the Wadsworth Atheneum