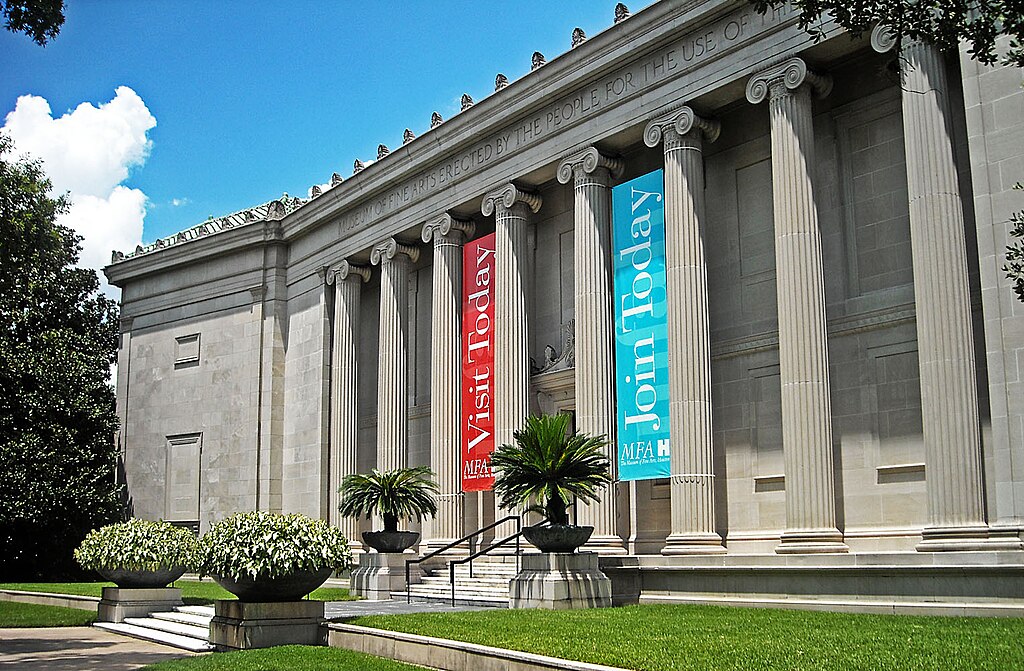 The Museum of Fine Arts, Houston (MFAH), is one of the largest museums in the United States with a permanent collection spanning over 6,000 years of history, with about 64,000 works from six continents.

The museum’s collections and programs are housed across seven separate facilities.

A Virtual Tour of the Museum of Fine Arts, Houston

Highlights Tour of the Museum of Fine Arts, Houston

“Portrait of an Old Woman” by Hans Memling

“Portrait of an Old Woman” by Hans Memling portrays an old woman’s face with a headdress that dominates the painting.

Memling has created a dramatic contrast between her cream headdress and the black background.

The panel we see today has been cut down in size, given its tight framing; however, the subtle treatment of skin tones after 500 years of historical handling demonstrates Memling’s skills and restoration efforts.

“The Entrance to the Grand Canal, Venice” by Canaletto

The composition is a veduta, a word derived from the Italian for “view,” which means a highly detailed, large-scale painting of a cityscape or some other vista.

This Canaletto is a typical example of the ‘vedute paintings’ popular with Grand Tour travelers of the 11700sas, a visual record of their travels.

Canaletto was one of the more famous painters of city views or vedute, especially of Venice. From 1746 to 1756, he worked in England, where he created many paintings of the sights of London.

He was highly successful in England. He became famous thanks to the British merchant and connoisseur Joseph Smith, who sold his extensive collection of Canaletto’s paintings to King George III in 1762.

“The Elder Sister” by William-Adolphe Bouguereau

“The Elder Sister” by William-Adolphe Bouguereau portrays a young girl, “the elder sister,” sitting on a rock and holding a sleeping baby, “the younger brother,” on her lap, with a rural landscape behind them.

The girl is looking directly at the viewer, and the structured composition, with the positioning of the legs and arms of the children, demonstrate Bouguereau’s academic painting style.

Bouguereau’s daughter Henriette and son Paul served as models. There is also another painting by Bouguereau called “The Elder Sister” at the Brooklyn Museum.

“The Orange Trees” by Gustave Caillebotte

“The Orange Trees” by Gustave Caillebotte portrays Caillebotte’s brother Martial reading in the shade of the orange trees. T

heir cousin, Zoé, is standing at one of the garden planters, which contain the trees.

The poses of both suggest that they are each enjoying the afternoon quietly with their private thoughts.

The sunlight illuminates a circular flower bed surrounded by a curving path, at the edge of which is a sleeping dog.

“Ariadne Abandoned by Theseus” by Angelica Kauffman depicts Ariadne, who has been abandoned on a Greek island.

Her lover Theseus, whose ship sails away to the far left of the picture, has deserted her. Ariadne was a Cretan princess in Greek mythology.

Ariadne helped Theseus kill the half man half bull Minotaur and then eloped with Theseus, but Theseus abandoned Ariadne.

“Saint John the Baptist Preaching in the Wilderness” by Anton Raphael Mengs depicts the Saint as a preacher anticipating a messianic figure greater than himself.

Some scholars believe that John belonged to the Essenes, a semi-ascetic Judaic sect who expected a Hebrew messiah and who practiced ritual baptism.

A river can be seen in the background of this painting. John used baptism as the central symbol or sacrament of his pre-messianic movement.

Most scholars agree that John baptized Jesus. John was frequently shown in Christian art, identifiable by his reed cross and camel’s skin clothing: “his raiment of camel’s hair, and a leather girdle about his loins; and his meat was locusts and wild honey.”

“Diana as Huntress” by Nicolaes de Helt Stockade depicts the goddess, who, according to the Greek legend of Artemis, her counterpart, was born on the island of Delos.

Her parents were the gods Jupiter and Latona, and her twin brother was Apollo. She is considered a virgin goddess and protector of childbirth.

The Roman poet Nemesianus wrote a typical description of Diana: “She carried a bow and a quiver full of golden arrows, wore a golden cloak, purple half-boots, and a belt with a jeweled buckle to hold her tunic together, and wore her hair gathered in a ribbon.”

Map for the Museum of Fine Arts, Houston

The Museum of Fine Arts, Houston

Museum of Fine Arts, Houston Lecture “Michelangelo and the Vatican”

“Life is not about how fast you run, or how high you climb,
but how well you bounce.”
Texas Proverbs