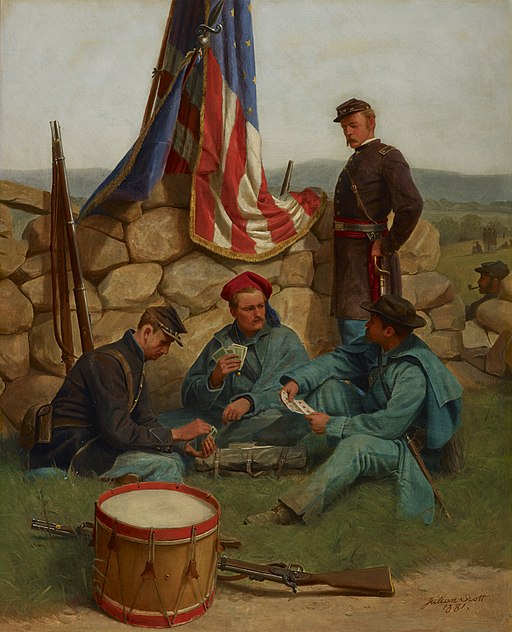 The military uniforms show two soldiers wear the standard blue uniform of the Union Army. At the same time, the two seated figures are state militia volunteers, who wore their own uniforms.

The seated soldier at right represents a Green Mountain Brigade volunteer from Vermont. The card player in the red hat is in the Zouave costume derived from the French army’s famous battalion.

The distinctive uniforms of the Zouave units were of North African origin. It generally included short open-fronted jackets, baggy trousers, sashes, and a fez-like chéchia head-dress.

Julian Scott’s artistic career grew out of his service in the Civil War. In 1861, at age 15, he enlisted as a musician in the Third Vermont Regiment.

After the war, he received formal training, and his military compositions became popular. Although this painting was completed in 1881, it was based on his Civil War experience.

The first Zouave regiment was a mixture of Berber, Arab, French European, and black volunteers. In the 1860s, new units in several other countries called themselves Zouaves.

In the United States, Zouaves were brought to public attention by the “Zouave Cadets.”  Zouave units were then raised on both sides of the American Civil War of 1861–65.

Numerous Zouave regiments were organized from soldiers of the United States of America who adopted the name and the North African–inspired uniforms during the American Civil War.

The Union army had more than seventy volunteer Zouave regiments throughout the conflict, while the Confederates fielded about twenty-five Zouave companies.

A feature of some American Zouave units was the light infantry tactics and drill they employed. They moved at double-time, rather than marching.

They lay on their backs to load their rifles rather than standing to do so, and to fire, they rolled to face forward and shoot.

More than 28,100 Vermonters served in Vermont volunteer units. Vermonters suffered a total of 1,832 men killed or mortally wounded in battle. Another 3,362 died of disease, in prison, or from other causes.

A Tour of the Museums in Washington, D.C.

“We don’t even know how strong we are until we are forced to bring that hidden strength forward. In times of tragedy, of war, of necessity, people do amazing things. The human capacity for survival and renewal is awesome.”
– Isabel Allende