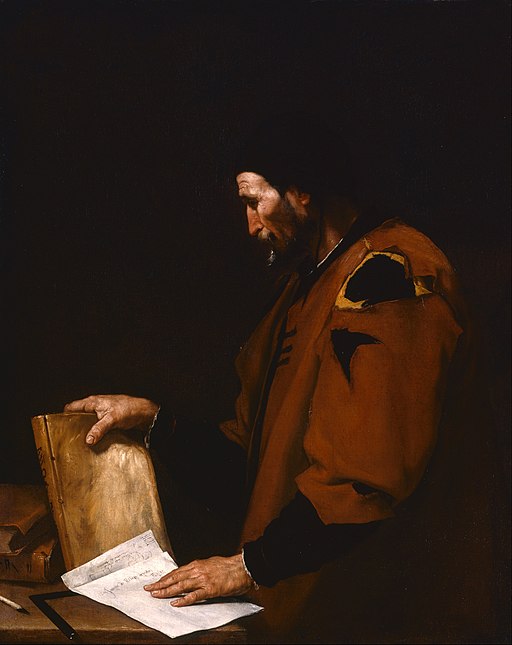 Aristotle, by Jusepe de Ribera, is portrayed wearing a scholar’s skullcap and a ragged robe, as a “beggar philosopher,” a popular rhetorical device in the seventeenth century.

His asceticism was in keeping with Spanish Catholicism and is a hallmark of the saints Ribera also painted.

Aristotle is shown surrounded by a light reminiscent of Caravaggio. De Ribera’s naturalistic style makes this painting a powerful evocation of a philosopher deep in thought and contemplation.

Aristotle is painted with deep creases in his worn face and hands. Ribera signed the picture across the papers in Aristotle’s hand, appending “español” to his name to assert his nationality.

This painting is part of a series of six portraits of ancient philosophers commissioned by the Prince of Liechtenstein in 1636. An early inventory listed the philosophers like Aristotle, Plato, Crates, Anaxagoras, Protagoras, and Diogenes.

The identification of this particular image has been challenging as only Diogenes, Anaxagoras, and Crates are identified by inscriptions on the paintings.

The current consensus is that the doctor’s robe and scholar’s skullcap in this painting signifies that the image must be Aristotle.

However, this image was also thought to represent Archimedes due to the geometric drawings in his hand, although that philosopher was not mentioned in the inventory.

Aristotle (384 – 322 BC) was a Greek philosopher during the Classical period in Ancient Greece. He was the founder of the Peripatetic school of philosophy and Aristotelian tradition.

Along with his teacher Plato, he has been called the “Father of Western Philosophy.”

Aristotle provided a synthesis of the various philosophies existing before himself. It is from Aristotle’s teachings that the West inherited its lexicon, as well as his methods of inquiry. As a result, his philosophy has exerted a unique influence on almost every form of knowledge in the West.

At seventeen years of age, he joined Plato’s Academy in Athens and remained there until the age of thirty-seven. After Plato died, Aristotle left Athens and tutored Alexander the Great, beginning in 343 BC.

He established a library in the Lyceum, which helped him to produce many of his hundreds of books on papyrus scrolls.

Though Aristotle wrote many treatises and dialogues, only around a third of his original output has survived.

Jusepe de Ribera (1591 – 1652) was a Spanish painter and printmaker of the Spanish school, although his mature work was all done in Italy.

His earlier style was founded on Caravaggio and Spanish and Venetian masters.

Ribera’s work remained in demand after his death, mainly through the hyper-naturalistic depictions of subjects.

He painted the horrors and reality of human cruelty and showed he valued truth over idealism. However, many works attributed to him have been altered, discarded, damaged, and neglected during the periods of his obscurity.

“The roots of education are bitter, but the fruit is sweet.”

“Happiness depends upon ourselves.”

“The whole is more than the sum of its parts.”

“It is the mark of an educated mind to be able to entertain a thought without accepting it.”

“Pleasure in the job puts perfection in the work.”

“We are what we repeatedly do. Excellence, then, is not an act, but a habit.”

“The end of labor is to gain leisure.”