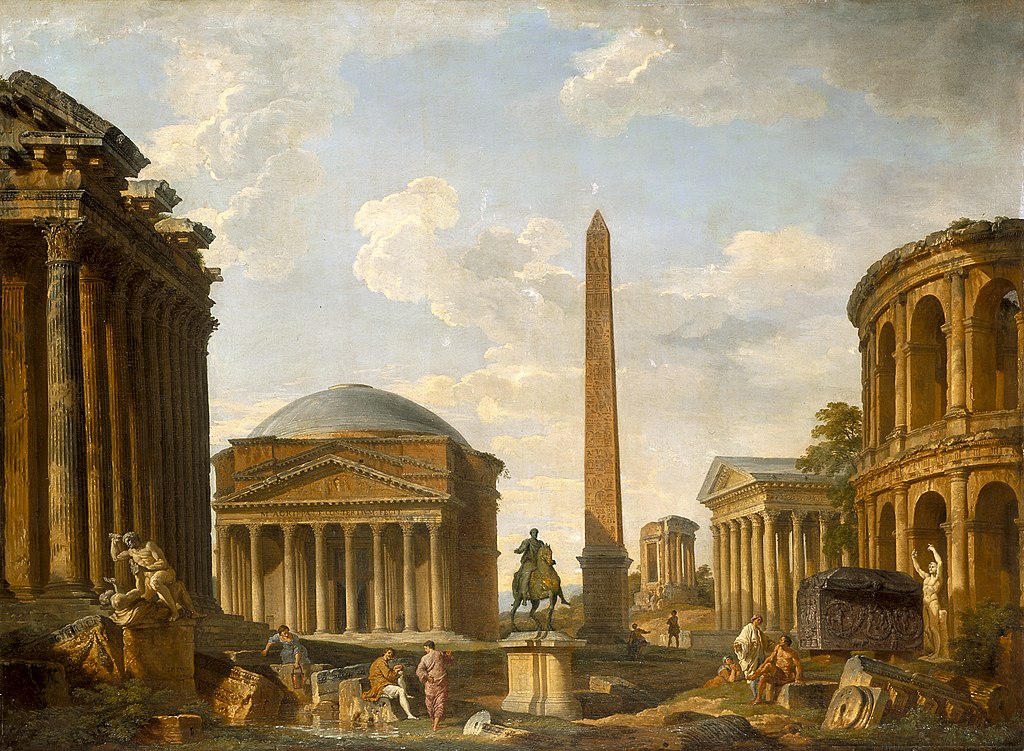 “Roman Capriccio: The Pantheon and Other Monuments” by Giovanni Paolo Panini

“Roman Capriccio: The Pantheon and Other Monuments” by Giovanni Paolo Panini depicts an array of famous Roman monuments in a rural setting.

Panini was a famed painter of capriccios or architectural fantasies. This composition has combined several ancient buildings and monuments from Roman into one convenient location without regard to actual topography.

From left to right, he included the Temple of Hadrian, the Pantheon, the Temple of Vesta, the Maison Carrée, and the Theater of Marcellus, and the Obelisk of Thutmose III.

In the center is the Equestrian Statue of Marcus Aurelius, around which are shown ancient Roman peasants living their ideal lives.

These capriccio paintings were created for wealthy European youths who undertook the Grand Tour, about two to three hundred years ago. They could afford to bring back beautiful paintings as souvenirs and as memories of their travels.

Thus, sketches and paintings of landmarks such as those in the Capriccio were in high demand. They were compositions that could be shown-off back home in high society to demonstrate the sites they visited.  Geographical accuracy was not as important as the ideal image of famous monuments and sites.

So Panini and his contemporary painters were free to rearrange scenery in paintings in imaginative ways. This creative reorganization led to a better comprehension of the ideal, rather than current, conditions of the monuments. These paintings idealized the civilizations that created them.

In this painting, Panini has attempted to be faithful to the original architectural reconstructions. He edited out modern additions to the original ancient buildings, such as the walled-in sections in the arches of the Theater of Marcellus.

These images also had a pronounced influence on the architecture of neo-classical buildings in large cities and the capitals of Europe and the Americas.

In painting, a capriccio means an architectural fantasy, placing together buildings, archaeological ruins, and other structural elements in fictional combinations.

This style of painting was introduced in the Renaissance and continued into the Baroque.

One of the best-known proponents of capriccio was the artist Giovanni Paolo Pannini. This style was extended in the 1740s by Canaletto in his vedute.

Many other painters have also experimented with the method, including J. M. W. Turner, with his Carthage paintings.

Roman Capriccio: The Pantheon and Other Monuments