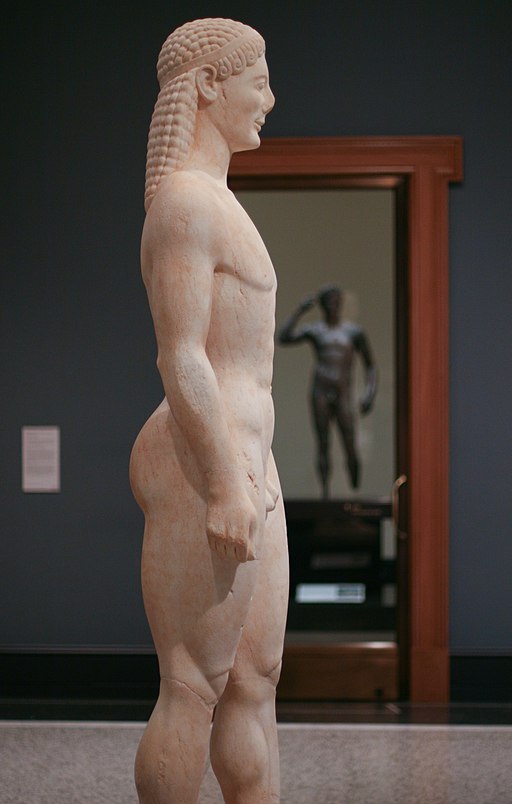 This Greek Kouros at the Getty Museum is an over-life-sized marble statue of a beardless naked youth in an advancing posture. The modern term kouros (plural kouroi) is given to free-standing ancient Greek sculptures that first appear in the Archaic period in Ancient Greece and represent nude male youths. In Ancient Greek kouros means “youth, boy, especially of noble rank.” Such statues are found across the Greek-speaking world. Most of this type have been found in the sanctuaries of Apollo.

The Getty Museum bought this Kouros 1985 following initial favorable scientific analysis of the patina and aging of the marble. The question of its authenticity started when the demonstration of an artificial means of creating the aging in the marble was proven. Some art historians have since questioned if it is truly one of only twelve surviving complete kouroi. If it is fake, the Getty kouros exhibits a high degree of technical and artistic sophistication. Its status remains undetermined, and today the museum’s label reads:

Neither historians nor scientists have been able to resolve the authenticity of the Getty Museum’s Kouros. Certain elements, such as the mixture of stylistic traits and the source of marble has led to questions of authenticity. However, these anomalies may also be due to the limited knowledge of Greek sculpture in this period.

The kouros type of sculpture appears to have served several functions. Many kouroi have been discovered in cemeteries where they served as commemorative tombstones of the deceased.  Kouroi were also used as a memorial for victors in the games, and as offerings to the gods. Some kouroi placed in sanctuaries were not inscribed with the name of the god but with a mortal, such as the ‘Delphi Twins’, who were honored for their loyalty with matching kouroi. Historians believe there is a direct influence between Ancient Egyptian sculptures and the kouros type because of trade and cultural relations that existed between Greece and Egypt since the 7th century B.C.

Kouroi are beardless, with an advancing posture, and are most often nude. Similar to the style of Egyptian sculpture, Greek kouroi often have their left leg extended forward as though walking. The nudity of the kouros may have represented athletic or heroic nudity. The female sculptural counterpart of the kouros is the kore.

Archaic Greece was the period in Greek history lasting from 800 BC to 480 BC, after the Greek Dark Ages and succeeded by the Classical period. The Archaic period saw developments in Greek politics, economics, international relations, warfare, and culture. It laid the groundwork for the Classical period, both politically and culturally.

During this time in Athens, the earliest institutions of the democracy were implemented, and political reforms at the end of the Archaic period brought in Athenian democracy as it was during the Classical period. In Sparta, a subjugated population group was introduced, and the Peloponnesian League was founded, making Sparta a dominant power in Greece.

It was in the Archaic period that the Greek alphabet developed, that the earliest surviving Greek literature was composed, that monumental sculpture and red-figure pottery began in Greece, and that the hoplite became the core of Greek armies.

A Tour of the Top Museums in the U.S.A.

“Old things become new with the passage of time.”
– Nicostratus