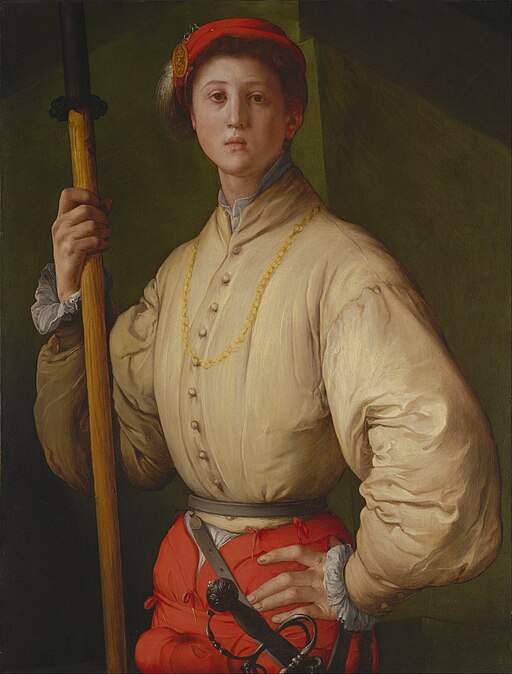 Portrait of a Halberdier by Pontormo

“Portrait of a Halberdier” by Pontormo depicts a young man standing before a fortress wall, holding a halberd. A halberd is a two-handed pole weapon that came to prominent use during the 14th and 15th centuries, and troops that used the weapon were called halberdiers. The identity of the person is not certain; however, Florentine records noted that during the siege of Florence in 1528, the artist, Pontormo painted a portrait of a young nobleman called Francesco Guardi as a soldier.

The young man’s direct stare and self-aware pose with his hand on the hip are striking; however, his face and slim body suggest that he is a teenager. The artist Jacopo da Pontormo was renowned for his complex psychological studies, and in this portrait, he conveyed the youthful vulnerability of this young man. This portrait by Pontormo typifies the Mannerism movement of his time, which made itself known by elongated proportions, highly stylized poses, and lack of a clear perspective.

A halberd, also called halbert, or Swiss voulge consists of an axe blade topped with a spike mounted on a long shaft. It always has a hook or thorn on the backside of the axe blade for grappling mounted combatants. The halberd was usually 1.5 to 1.8 meters (5 to 6 feet) long.

The halberd was inexpensive to produce but versatile and useful in battle. Its point allowed ground troops to push back approaching mounted combatants, and the hook opposite the axe head was used to pull horseback riders to the ground. The halberd had been used by many lower-ranking defenders to kill or wound many famous high-ranking military leaders in battle.

The halberd has also been used as a court bodyguard weapon for centuries and is still the ceremonial weapon of the Swiss Guard in the Vatican and the Halberdiers of the Spanish Royal Guard.

During the Siege of Florence, which took place from 1529 to 1530, a massive Imperial and Spanish army surrounded the city. After a siege of nearly ten months, the army captured the city, overthrowing the Republic of Florence and installing Alessandro de’ Medici as the ruler of the city. The Florentines had thrown off Medici rule and established a republic in 1527; however, the armies that seize Florence return the Medici to power.

Jacopo Carucci (1494 – 1557), usually known as Jacopo da Pontormo or simply Pontormo, was an Italian Mannerist painter and portraitist from the Florentine School. He is famous for his use of ambiguous perspective, however much of his work has been lost or severely damaged. Recently he has received renewed attention by contemporary art historians as an essential member of the Mannerism art movement.

Mannerism was a style in European art that emerged in the later years of the Italian High Renaissance around 1520 and lasting until about the end of the 16th century in Italy when the Baroque style largely replaced it. Where High Renaissance art emphasizes proportion, balance, and ideal beauty, Mannerism exaggerates such qualities, often resulting in compositions that are asymmetrical or unnaturally elegant.

Portrait of a Halberdier (Francesco Guardi?)

“Every good composition is above all a work of abstraction. All good painters know this. But the painter cannot dispense with subjects altogether without his work suffering impoverishment.”
– Diego Rivera