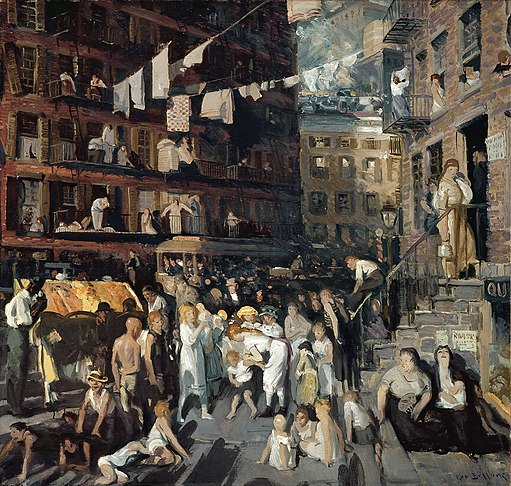 The city grew from one-and-a-half to five million in the forty years proceedings this depiction, primarily due to immigration. In this painting, people spill out of tenement buildings onto the streets, stoops, and fire escapes.

Laundry flaps overhead and a street vendor hawks his goods from his pushcart amid all the traffic. In the background, a trolley car heads toward Vesey Street.

Many of the new arrivals, Italian, Jewish, Irish, and Chinese, crowded into tenement houses on the Lower East Side.

Among them were thousands of Eastern European Jews, who found temporary or permanent shelter along streets such as East Broadway, the setting for Cliff Dwellers.

Cliff Dwellers skillfully conveys the sense of congestion, overpopulation, and the impact of the city on its inhabitants.

The living quarters of many of the Cliff Dwellers were small, dense, and dark, which is illustrated in this composition.

The painting also shows how industrialization had impacted the working-class lifestyle at that time.

The Ashcan School, also called the Ash Can School, was an artistic movement in early-20th-century in the United States.

This painting is a representative example of the Ashcan School, that favored the realistic depiction of gritty urban subjects.

Some critics called new York Realists the “apostles of ugliness.” One critic conferred the pejorative label “Ashcan School” to their at, and it became the standard term for this first significant American art movement of the 20th century.

The Lower East Side is a neighborhood in the southeastern part of the New York City borough of Manhattan, roughly located between the Bowery and the East River and Canal Street and Houston Street.

Traditionally it was an immigrant, working-class neighborhood. It began rapid gentrification in the mid-2000s, prompting the National Trust for Historic Preservation to place the area on their list of America’s Most Endangered Places.

The bulk of immigrants who came to New York City in the late 19th and early 20th centuries came to the Lower East Side, moving into crowded tenements.

By the 1840s, large numbers of German immigrants settled in the area, and a large part of it became known as “Little Germany.”

The German immigrants were followed by groups of Italians and Eastern European Jews, as well as Greeks, Hungarians, Poles, Romanians, Russians, Slovaks, and Ukrainians, each of whom settled in relatively homogeneous enclaves.

By 1920, the Jewish neighborhood was one of the largest of these ethnic groupings, with 400,000 people.

Living conditions in these areas were far from ideal, and the city itself moved to address the problem by building the first public housing projects in the United States.

Bellows was part of the Ashcan School, which was an artistic movement in the United States during the early 20th century. Best known for works portraying scenes of daily life in New York, often in the city’s more impoverished neighborhoods.

A Virtual Tour of American Museums

“The artist is the person who makes
life more interesting or beautiful,
more understandable or mysterious, or probably,
in the best sense, more wonderful.”
– George Bellows