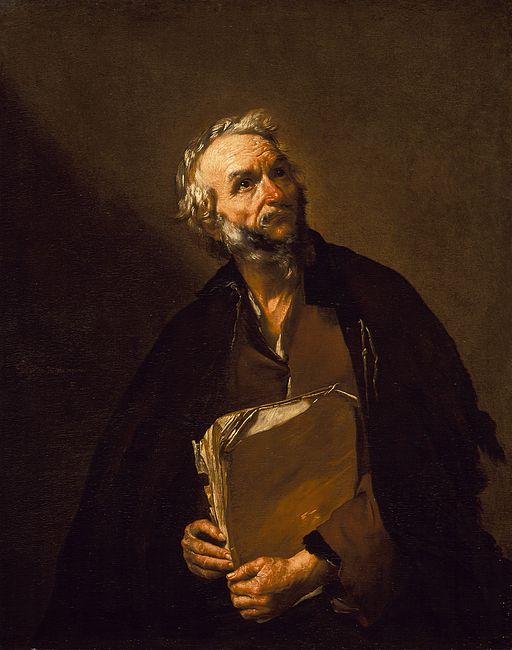 De Ribera’s “Philosophers” series of paintings all echo a powerful evocation of a philosopher deep in contemplation.

Plato ( 428 – 347 BC) was an Athenian philosopher in Ancient Greece. He was the founder of the Platonist school of thought, and the Academy, the first institution of higher learning in the Western world.

Plato was the innovator of the written dialogue and dialectic forms in philosophy. Platonism and “Platonic love” are his namesake.

He was the pivotal figure in the history of Western philosophy, along with his teacher, Socrates, and his most famous student, Aristotle.

His influence extended to the philosophers who influenced Saint Augustine and, as a consequence, Christianity. Plato advocated a belief in the immortality of the soul, and several dialogues end with long speeches imagining the afterlife.

Unlike the work of nearly all of his contemporaries, Plato’s entire body of work is believed to have survived intact for over 2,400 years. Plato’s works have never been without readers and admirers since the time they were written.

Jusepe de Ribera (1591 – 1652) was a Spanish painter and printmaker of the Spanish school, although his mature work was all done in Italy. His earlier style was founded on Caravaggio and Spanish and Venetian masters.

Ribera’s work remained in demand after his death, mainly through the hyper-naturalistic depictions of subjects. He painted the horrors and reality of human cruelty and showed he valued truth over idealism.

However, many works attributed to him have been altered, discarded, damaged, and neglected during the periods of his obscurity.

The Drawings of Jusepe de Ribera

“One of the penalties for refusing to participate in politics is that you end up being governed by your inferiors.”

“Only the dead have seen the end of war.”

“At a touch of love, everyone becomes a poet.”

“The beginning is the most important part of the work.”

“Be kind; for everyone you meet is fighting a hard battle.”

“Music is a moral law. It gives soul to the universe, wings to the mind, flight to the imagination, and charm and gaiety to life and to everything.”

“Man, a being in search of meaning.”

“Good people do not need laws to tell them to act responsibly, while bad people will find a way around the laws.”

“A good decision is based on knowledge and not on numbers.”

“Poetry is nearer to vital truth than history.”

“One of the penalties for refusing to participate in politics is that you end up being governed by your inferiors.”
– Plato