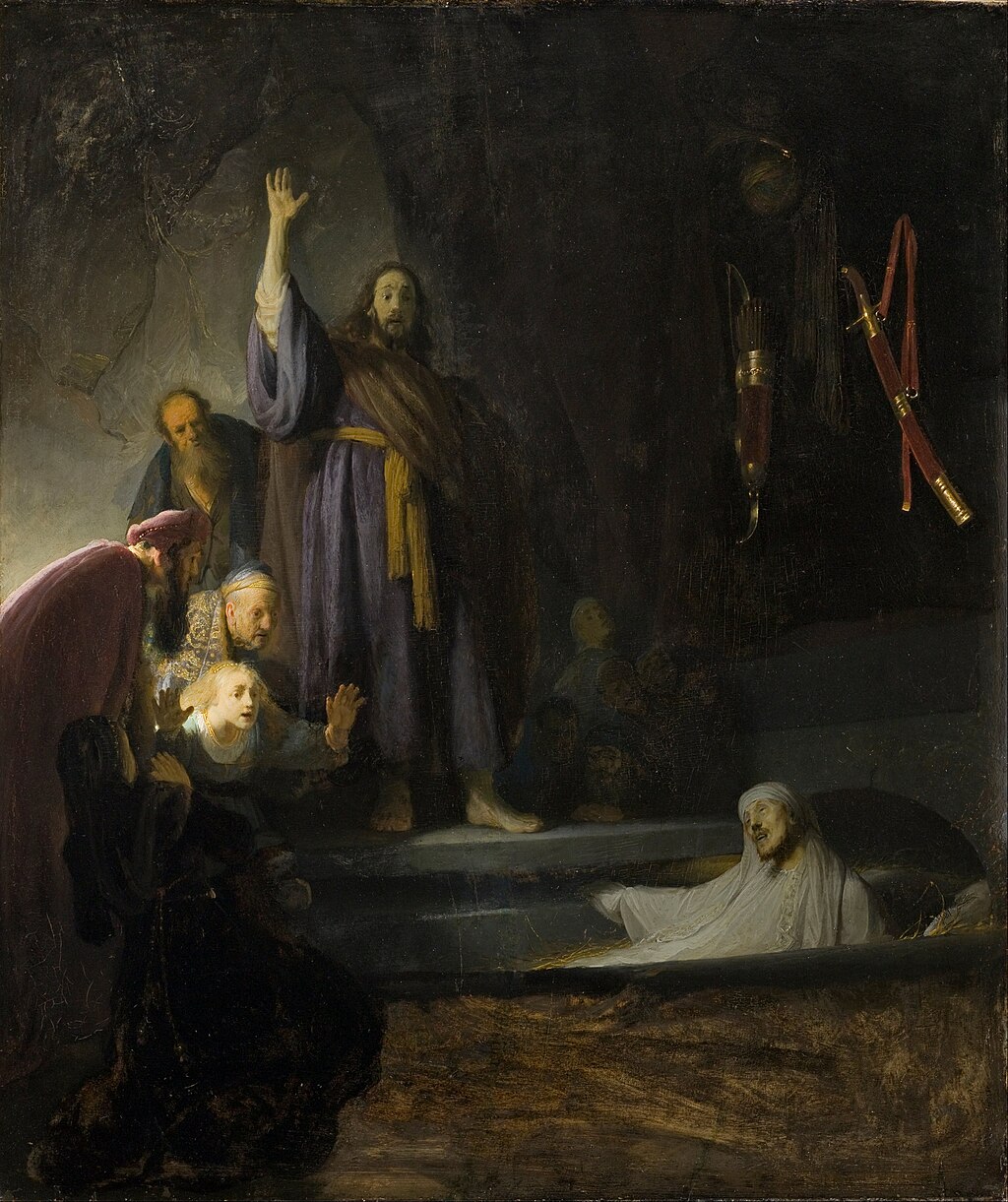 “The Raising of Lazarus” by Rembrandt

“The Raising of Lazarus” by Rembrandt, depicts the scene from the New Testament Bible. For the creation of this composition, Rembrandt experimented with drawings and etchings on this subject with differing configurations.

This scene is in a tomb with Christ standing in the cave with his hand raised to perform the miracle. Rembrandt represents Lazarus’s rising as caused by Christ’s forceful gesture and his faith. Lazarus’ sisters Mary and Martha look on in amazement, as do the other spectators.

The astounded witnesses’ expressions record successive states of awareness and awe. The dramatic darkness of the cave is in contrast to the subtle colors in the costumes.

The glinting highlights of the quiver and scabbard hanging on the wall were Lazarus’ weapons, as according to medieval legend, Lazarus was a soldier. 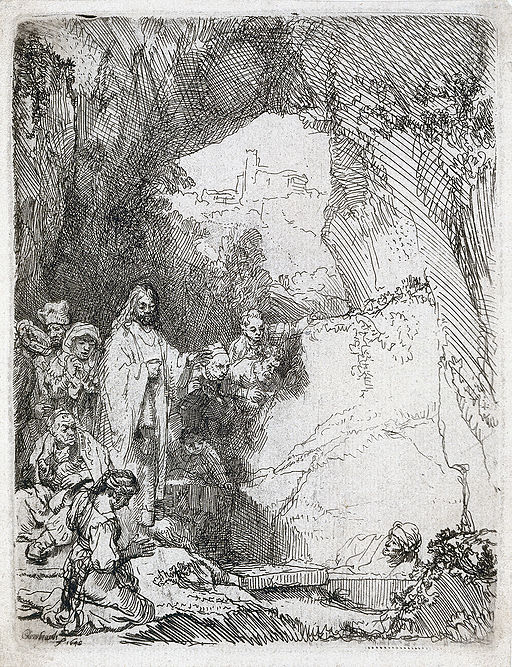 Rembrandt painted and drew many stories and parables of the Bible as recognizable and familiar images. The Dutch Reformed Calvinism at Rembrandt’s time forbade religious art in churches.

Thus there were limited public commissions for paintings of biblical subjects. Fortunately, private patronage for them thrived, and Rembrandt tapped into this demand.

The Raising of Lazarus after Rembrandt by Vincent van Gogh

Rembrandt’s paintings have influenced many successive painters. Including Van Gogh, who also painted a picture called “The Raising of Lazarus (after Rembrandt),” based on a print of the Rembrandt image.

Van Gogh depiction left out the central figure of Christ with his arm raised he focused on the human suffering and identified with Lazarus in the tomb. Lazarus, in the Van Gogh painting below, has a red beard, just like Van Gogh.

Prints from other masters inspired Van Gogh during his stay at the hospital in Saint-Rémy, and he made his version of the Raising of Lazarus from an etching by Rembrandt. With his ginger beard, Lazarus bears some resemblance to Van Gogh himself.

The painter may have seen a parallel between Lazarus’ return from the dead and his struggle from mental illness towards recovery. 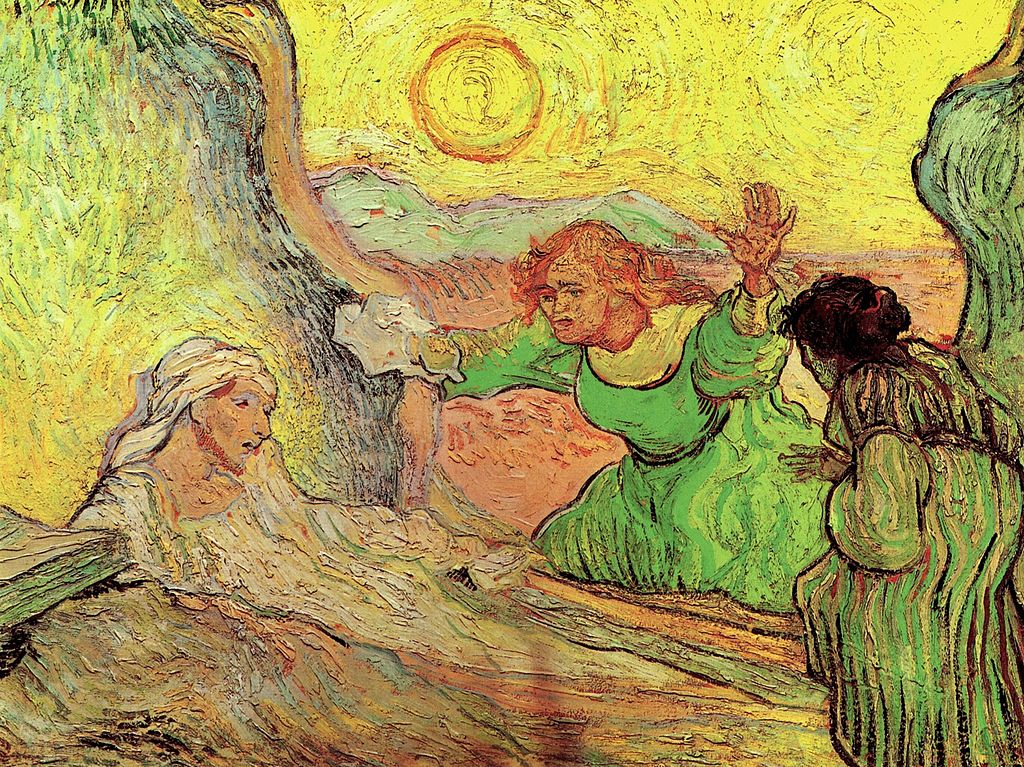 The Raising of Lazarus after Rembrandt by Vincent van Gogh (1890)

This painting is based on an etching by Rembrandt that Van Gogh’s brother Theo had sent him. Van Gogh seems to be focused on the theme of human suffering. He was identifying with Lazarus in the tomb.

While he also imagined the reaction of two acquaintances from Arles, Mrs. Roulin, in the green dress, and Mrs. Ginoux, in a dress with colorful stripes. Christ is depicted symbolically through the sun to evoke the healing powers of faith. Spiritual meaning and emotional comfort were expressed through symbolism and color.

While at Saint-Paul asylum, where Van Gogh admitted himself, he explored famous works from renowned artists. Van Gogh created over 30 artworks that were copies inspired by some of his favorite artists.

However, rather than replicate, Van Gogh sought to translate the subjects and composition through his unique perspective of color and technique.

Rembrandt’s works depict a range of styles and subjects, from portraits to landscapes, genre scenes, allegorical and historical scenes, as well as biblical and mythological themes.

Vincent Willem van Gogh (1853 – 1890) is among the most famous and influential figures in the history of Western art. Van Gogh was unsuccessful during his lifetime and was considered a madman and a failure.

The Raising of Lazarus (after Rembrandt) by Vincent van Gogh

The Raising of Lazarus

Vincent Van Gogh Visits the Gallery | Vincent And The Doctor

“A painting is finished when the artist says it is finished.”
– Rembrandt